As must always happen, another Doctor’s time has come to a close. This time we must say goodbye to Peter Capaldi, the Twelfth Doctor. Not only is this Capaldi’s swan song, but it’s also showrunner Steven Moffat’s final episode. For Doctor Who fans, the regeneration episode is always a bag of mixed emotions. It’s sad to see a beloved Doctor leave, but it’s exciting to get a glimpse of the new one and all the surprises that await us in the episodes ahead. In Twice Upon a Time (written by Steven Moffat and directed by Rachel Talalay), the Twelfth Doctor (Peter Capaldi) teams up with his former self, the First Doctor (David Bradley) and a returning Bill Potts (Pearl Mackie), for one last adventure. Two Doctors stranded in an Arctic snowscape, refusing to face regeneration. Enchanted glass people, stealing their victims from frozen time. And a World War One captain destined to die on the battlefield, but taken from the trenches to play his part in the Doctor s story. An uplifting new tale about the power of hope in humanity s darkest hours, Twice Upon A Time marks the end of an era. But as the Doctor must face his past to decide his future, his journey is only just beginning… The 60-minute special guest stars Mark Gatiss as The Captain and Nikki Amuka-Bird as the voice of the glass woman, and will see Peter Capaldi’s Doctor regenerate into the Thirteenth Doctor (Jodie Whittaker). (Mild spoilers ahead) 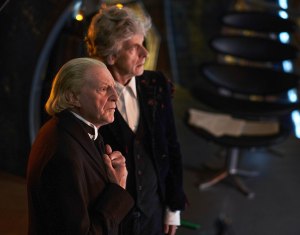 The first thing to note is that this special is unlike many of the previous specials in Moffat’s era; it’s very light on plot. While previous specials have been full of timey-wimey fun and complex plots, Twice Upon a Time is more than happy with being a quiet, character exploration. In a way, this feels like exactly the right move. It would’ve been too easy to muddle up Twelve’s final story with some complicated plot that somehow involves the First Doctor at the time of his regeneration, too. Thankfully, that’s not what happens. The episode actually bears similarities with one of Moffat’s other blockbuster episodes: The Day of the Doctor. Both The Day of the Doctor and Twice Upon a Time feature some kind of sentient machine helping the Doctor make a monumental decision – in The Day of the Doctor, that decision is whether the War Doctor should destroy Gallifrey or not and in Twice Upon a Time, that decision is whether the First (and Twelfth) Doctor should regenerate. By focusing on that idea and letting the story gently show both One and Twelve why they need to keep going, it allows the audience one last glimpse at just how great Capaldi was as Twelve.

Peter Capaldi is, as always, fantastic as the Twelfth Doctor. This episode requires from him a more quiet, subdued performance than previous episodes have, but in the context of his character development over the last season of the show, it makes sense. His Doctor is a Doctor who is tired. He’s saved the world countless times, lost another companion (who he promised to keep safe) and he just wants to quietly give up. Capaldi portrays that element of his Doctor with genuine pathos. He never really dips into cynicism; he always stays connected to the elements of his Doctor that audiences have come to love, but you can just tell that he is tired. It’s a beautiful continuation of where the character was left off at the end of the previous episode, The Doctor Falls, and the resolution of Twelve’s arc leading into his regeneration feels genuinely earned. There’s always the risk of these regeneration episodes falling into melodramatic cliches, but Capaldi elevates his performance above that and really gives his Doctor’s final moments the quiet weight it deserves.

However, Capaldi is not the only star of this episode. He shares nearly equal screentime with David Bradley’s First Doctor and Pearl Mackie’s Bill Potts. Both Bradley and Mackie are superb in their respective parts, and as she did throughout the tenth season, Pearl Mackie routinely steals whatever scene she’s in. Doctor Who was lucky to snatch her up and cast her in this role and it’s a true shame that she won’t be continuing in the next season of the show alongside Jodie Whittaker’s Thirteenth Doctor. David Bradley, too, shines in every scene he’s in. It’s a bit unfortunate that the writing doesn’t quite hold up – the First Doctor’s characterization isn’t quite as consistent with where the character was at this point in his life (his regeneration story, The Tenth Planet, beautifully flashed back to – and reenacted – a few times throughout the episode). By the end of William Hartnell’s run as the First Doctor, the character was a lot warmer and grandfatherly than he’d originally begun the series as, but in Twice Upon a Time, a lot of that grandfatherly charm is replaced with bristle. The episode is full of jokes about how non-politically correct the First Doctor was, and it feels a bit excessive. Like all of the classic Doctors, One tended to be a bit misogynistic, as was the case with many men in television during that time period. But it feels like Twice Upon a Time exaggerates that a bit just for a good laugh. It’s not enough to really detract from the overall enjoyment of the episode, but hardcore fans of the classic run of Doctor Who will notice it and will likely be a bit unhappy (as they are wont to be).

As for the regeneration itself? It hit me like a freight train. I knew I adored Capaldi’s run as the Doctor, but I didn’t realize just how much I’d miss him. It helps that the last ten minutes of the episode really builds up the emotion. Moffat brings back a few characters that were central to the Twelfth Doctor and it was the appearance of one character in particular – who shall remain nameless – and the impact that character’s appearance had on the Doctor that really brought the feels out of me. I genuinely shed a tear in that moment. Capaldi’s actual regeneration was surprisingly quiet. Like a lot of the episode, by the time the regeneration happens, he’s just sorta resigned to it. In a good way, though. He’s decided it’s the right thing to do, but there are just a few things he needs to do first and once he’s delivered his final monologue – effectively a “how to” guide to his future incarnation on how to be the Doctor -, he finally succumbs to the regeneration and it’s a beautiful moment. 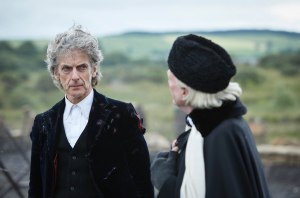 Throughout Moffat’s tenure as showrunner, he liked to play around with the genre of fairy tales. His version of Doctor Who frequently played out a bit more like a fantastical fairy tale than true science fiction and the same is done with Twice Upon a Time. From the very first words that appear onscreen, it’s clear that this episode is Moffat’s final take on Doctor Who as a fairy tale. And, to be honest, Twice Upon a Time is a pretty good fairy tale for Moffat to go out on. It’s warm and emotional, full of joy and pathos, funny and touching, and just all around enjoyable. It’s well written, directed, acted, and scored. It’s a quiet note for Capaldi’s Doctor to go out on, but it feels right. As for Jodie Whittaker’s first moments as the Thirteenth Doctor, well, there’s not a whole lot to go on, but that cliffhanger has left me really wanting more. So, bring out the next era of Doctor Who with new showrunner Chris Chibnall and Jodie Whittaker as the Thirteenth Doctor! Until then, goodbye, Peter Capaldi. Thanks for all the joy over these past few years. You will be missed in the role.