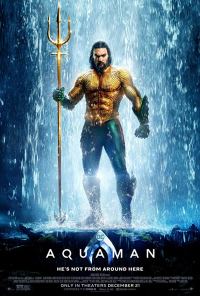 I’m not afraid to admit that Aquaman was one of my least anticipated films of 2018. It’s a movie about a character I’ve never been interested who was also deeply uninteresting in his previous big-screen appearance in last year’s Justice League. None of the trailers released for the film ever looked particularly good. The visuals were incredible, but the acting from Jason Mamoa (Aquaman) and Amber Heard (Mera) was wooden and boring to watch. So, to say I wasn’t excited about the film would be an understatement, but I love DC and I want the DC movies to succeed and to be good, so, I still saw the movie. And, to be honest, my initial impression was correct. For as innovative as the visuals were, the storytelling and acting were not. (Mild spoilers may follow)

From Warner Bros. Pictures and director James Wan comes an action-packed adventure that spans the vast, visually breathtaking underwater world of the seven seas, “Aquaman,” starring Jason Momoa in the title role. The film reveals the origin story of half-human, half-Atlantean Arthur Curry and takes him on the journey of his lifetime–one that will not only force him to face who he really is, but to discover if he is worthy of who he was born to be… a king.

There are two major problems with Aquaman: its lead cast/characters and its story. Jason Momoa and Amber Heard play Aquaman and Mera and watching the two of them is duller than watching paint dry. While Momoa has some natural charisma that carries him a bit, he delivers all of his lines in one of two ways: yelling or mumbling. Meanwhile, Heard looks, sounds, and feels completely uninterested in the movie, as though she doesn’t believe in what’s happening around her and has no desire to actually be in this film. The two of them have nearly no chemistry on screen together and when they talk, it’s like it’s a competition of who can look and sound the most bored with what they’re doing. It doesn’t help that neither of them are given much to do. Mera is in this movie to act as a love interest for Aquaman and a catalyst for him to start his hero’s journey. Aside from knowing a couple of other things, she’s completely disposable to the story of this movie. She has very little character growth, outside of her blossoming relationship with Aquaman, and she does very little in the film’s climax. As for Aquaman, his first scene shows him straight up killing a man, who ends up being the father of one of the villains, Black Manta (Yahya Abdul-Mateen II), thereby setting Black Manta on his path to being a villain (more on him shortly). From there, Aquaman deals with his hesitance of being a king, which ultimately is the closest thing to a character arc that he gets in the film. He only goes to Atlantis to fight Orm (Patrick Wilson), his half-brother, because Mera tells him that Orm intends to start a war on the surface. As for Orm, he and Black Manta receive the least character development. Both men are one-dimensional villains. Orm believes the surface world has been polluting the oceans and wants to punish them; Black Manta is a pirate who wants revenge on Aquaman for the murder of his father. That’s the extent of their characters. Neither of them gets much of an arc or even much screentime, so it’s hard to care about either of them.

Which brings us to the other major problem with the film: its plot. Aquaman has to stop Orm from waging war on the surface world. To do this, he needs to usurp Orm as the King of Atlantis. After failing a ritualistic battle that would have determined the ruler, Aquaman must find the magical Trident of Atlan, a mystical artifact that will only present itself to Atlantis’ true ruler. This plot isn’t exactly a bad one, but it’s a dull one. It’s a story we’ve seen countless times, dating back to ancient mythology. Most recently, we saw something similar in Black Panther. In that movie, Black Panther was the assumed king of Wakanda until Killmonger challenged him for the crown – and ultimately won – leading Black Panther on a journey to eventually regain the crown and stop Killmonger from waging war on the outside world. The main difference between Black Panther and Aquaman is that in Black Panther, our hero is already the king and the villain is the challenger while in Aquaman, the villain is the king and the hero is the challenger. Also, Aquaman has that extra find-the-MacGuffin plotline. The problem with Aquaman‘s plot is that it simultaneously feels like nothing is happening and too much is happening. It feels like two different movies smashed together and, as a result, none of it totally works. Neither Black Manta or Orm get enough screentime to feel like legitimate threats and the film never actually gives the audience any reason to care about Aquaman’s quest to find the Trident and become king of Atlantis. It just assumes we’ll care and goes about its merry way.

Aquaman is a mess of a film in terms of its writing and its acting. So much of the dialogue in the film is clunky as hell and there are several times where the movie grinds to a complete halt in order for a character to drop a load of exposition so the audience knows what the hell is going on. The biggest example of this comes about forty-five minutes into the film where, after already sitting through the first 20-exposition-heavy minutes of the film, we’re forced to sit through another dump as Vulko (Willem Dafoe), Arthur’s mentor, drops a lot of information about the trident and why it matters. Like most of the other characters, that exposition dump is the only reason why Vulko is in the film and the delivery of the exposition is so clunky that I legitimately tuned out after a while. The same thing happened when Orm drops a bunch of exposition to Aquaman like fifteen minutes later and tells him about the fate of their mother. Neither Dafoe nor Wilson, two genuinely good actors, could overcome this clunky dialogue. Like Heard and Momoa, neither Dafoe or Wilson seem particularly interested in what they’re saying, so none of the scenes have any dramatic weight. The writing is just a mess. It’s a movie where scenes keep happening but none of them are written well enough to make you actually care about what happens in them.

That being said, Aquaman isn’t a total wash. For as uninspired as the writing and acting are, the visuals of Aquaman are stellar. James Wan does some incredible work at bringing the world of Atlantis to life. I’ve long desired superhero movies to embrace nice, bright colors again, and, thankfully, Wan does just that. The ocean is filled with bright lights and vibrant blues and all the land-based scenes make full use of the location’s colors, especially the scene set in the desert where the sky is so blue and the sand is so golden and it’s all just genuinely gorgeous. The CGI in the film is also surprisingly good. Much of the film is CGI and, while it doesn’t always seem like the actors actually believe that they’re talking to/interacting with the CGI creations, the CGI is genuinely good looking. Atlantis is a hard locale to bring to life, yet Wan does so with immense skill (and the help of a whole lot of VFX artists). The other cool thing he brings to the film is the way he uses the camera. There are a number of times throughout the film where he uses long takes, either to show the passage of time, show off a beautiful location, or to show off a fight scene. But every time he does so, I remain impressed. It’s hard to pull off long shots, especially in action films, as everything has to be perfectly choreographed so they can be accomplished multiple times for multiple takes, but Wan pulls them off beautifully. He includes a lot of them, but they never feel indulgent or distracting; they’re always there to elevate the film. For as bad as Aquaman’s script and acting is, its visuals are amazing.

All in all, Aquaman is a deeply flawed film. It suffers from a by-the-numbers script, filled with little characterization, too much exposition, and poor pacing. The dialogue is clunky and the acting, as a result, is wooden. None of the actors have any chemistry with each other and Momoa and Heard are, unfortunately, boring to watch together. It’s a shame as they share the most screentime of the film. On the flip side, the visuals and soundtrack of the film are gorgeous. The film embraces its underwater setting and goes all out with the visuals, utilizing a lot of colors and interesting creature designs. The soundtrack helps shape the emotions of the film; even though the script is weak, the soundtrack often elevates the “emotional scenes” into something closer to genuine emotion than what was on the page. I can’t say that I recommend Aquaman. It’s not egregiously bad like Justice League was, but it’s nowhere near as good as Wonder Woman was. It’s a competently made film with a really weak script, wooden acting, and beautiful visuals. It’s visually interesting, but that’s about it. For the most part, I was just bored.

2.5 out of 5 wands (I’m tempted to give it 3 wands, just for how good Wan’s directing was and how well the fight scenes were choreographed, but neither of those came close to saving a film with such a boring script, so I’m gonna have to stick with 2.5. I’m sure plenty of people will like this film, but it isn’t for me.)