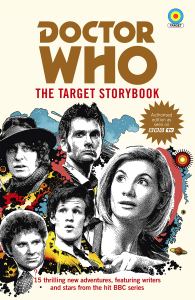 Last year, the Target line of Doctor Who novelizations burst back to life with the first adaptations of episodes from the revived TV series – Rose, The Christmas Invasion, Day of the Doctor, and Twice Upon a Time. The novels were really solid works in their own right, managing to take all the best elements of their respective TV episodes and weave them into something that worked as a novel. They also had the added bonus of reinvigorating the entire Target line – another batch of new adaptations has been announced for July 2020. And then there’s this collection of short stories that was published in October 2018. Normally, the Target range adapts preexisting Doctor Who TV stories, but this collection of short stories decided to go a different route – bringing readers a collection of stories set before/during/after iconic stories from all through Doctor Who‘s 50+ year history. And, I gotta say, a lot of these stories are really, really good.

Doctor Who: The Target Storybook (featuring stories from various authors)
In this exciting collection you’ll find all-new stories spinning off from some of your favourite Doctor Who moments across the history of the series. Learn what happened next, what went on before, and what occurred off-screen in an inventive selection of sequels, side-trips, foreshadowings and first-hand accounts – and look forward too, with a brand new adventure for the Thirteenth Doctor.

Each story expands in thrilling ways upon aspects of Doctor Who’s enduring legend. With contributions from show luminaries past and present – including Colin Baker, Matthew Waterhouse, Vinay Patel, Joy Wilkinson and Terrance Dicks – The Target Storybook is a once-in-a-lifetime tour around the wonders of the Whoniverse

Short story collections are always a little hit or miss. Given the often-large number of stories collected in a volume, the likelihood of every single story being amazing, or even good, isn’t very high. While every story in The Target Storybook isn’t an amazing, home run of a story, all of them are pretty darn solid. There’s not a bad one in the bunch and each of them does a really good job at capturing the essence of their respective Doctor’s eras within a short amount of time. Every genre of Doctor Who story is represented in this collection – there’s Classic Who-style historicals, space stories, alien planet stories, weird time travel stories, Earth-based stories. UNIT even makes an appearance. There’s just such a wealth of Doctor Who goodness within the pages of this collection and all of it is very well-written.

Some of my favorite stories include: “Save Yourself” by Terrance Dicks (2nd Doctor), “Punting” by Susie Day (4th Doctor), “Interstitial Security” by Colin Baker (6th Doctor), “The Slyther of Shoreditch” by Mike Tucker (7th Doctor), “We Can’t Stop What’s Coming” by Steve Cole (8th Doctor), “Decoy” by George Mann (War Doctor), “Citation Needed” by Jacqueline Rayner (11th-13th Doctors). Of this bunch, if I had to pick favorites, I’d probably go with “Save Yourself”, a story set during the final episode of “The War Games” where Gallifrey’s CIA makes the 2nd Doctor go on various missions for them, and “Citation Need”, a really fun, yet particularly heartbreaking story where the reader is in the mind of a sentient encyclopedia as it realizes it’s sentient. I also like that the stories for the 7th, 8th, and War Doctor’s all revolve around the Time War. The Seventh Doctor’s story confirming that the events of “Genesis of the Daleks” was the first shot of the war, the events of the Eighth Doctor’s story showing how aware of the forthcoming war the Doctor was, and the War Doctor’s story literally being set during a battle of the War. I just think the Time War is such a fertile ground for interesting stories, and prose might just be the best place to explore that concept and I love it when the BBC Books line leans into the Time War more. Overall, this collection was filled with some excellent stories that I can easily see myself returning to.

All that being said, I didn’t love every story in this collection. It’s not that any of them are bad, or anything, but much like Doctor Who as a whole, there are stories I like and stories I don’t; eras I like and eras I don’t. Most of the stories I didn’t love aligned with eras I’m not in love with, but some of the others I didn’t like just didn’t quite gel for me. Whether it be a pacing issue or something with the plot, there was just something that didn’t quite gel. for me. A specific example being Jenny T. Colgan’s story about the Meta Crisis Doctor and Rose, “The Turning of the Tide”. I appreciate Colgan going a totally different direction with the Meta Crisis Doctor than Big Finish did in their audios, but I’m not really sure I like this direction. Perhaps it’s realistically what might happen in this scenario, but there’s just something kind of sad about it and it makes me unhappy seeing Rose and the Meta Crisis Doctor struggle so much. The story itself is really good, though, even if I’m not in love with the characterization. And that’s the thing: even in those stories I didn’t love, there was still something I did enjoy. None of these stories come close to being clunkers; I just didn’t love them as much as I loved the others.

Overall, The Target Storybook is pretty emblematic of the entire line of Target novelizations; there are some really excellent stories found within its covers and there are some stories that are less than excellent. What differentiates this book from some of the less-good Target novels is that none of the stories in The Target Storybook are bad. In fact, I’m sure that some of the ones I didn’t love will be other people’s favorites. This is the best aspect of The Target Collection: there is a story for every Doctor Who fan. Whether you like Classic Who or New Who, whether you only like specific Doctors, whether you like Earth-based stories or sci-fi stories or historicals. There is something in this collection for you and every single story is very well-written. It’s clear that every author who wrote for this collection had a love for both Doctor Who and the spirit of the Target novelizations. I can’t recommend this title enough for anyone looking for a really quick Doctor Who fix. It’s solid.