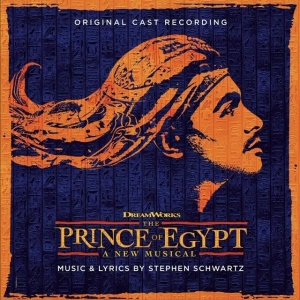 As I say every time I review an album, I don’t consider myself a music reviewer. I know the basics of what makes a song work, but I do know what I like and I mostly know why I like it. I do consider myself someone who can review musicals, though, which is why I’ll occasionally review the cast album for a musical. A good cast album should be able to stand on its own as a wholly complete piece of music but should also be a good representation of the musical and its plot. This is where The Prince of Egypt enters. I grew up watching the film and absolutely adore it. It’s once of my favorite animated musicals of all time and I’ve long wanted it to be adapted for the stage, much like Disney does with their animated films. And it’s finally happened. A big, grande adaptation opened in London’s West End earlier this year, and its cast album dropped today. Featuring all-but-one of the film’s songs and a whole host of new songs by original lyricist and composer, Stephen Schwartz, can this new musical hold a candle to its iconic source material? In short: more or less.

In the interests of full disclosure, it is a little hard for me to be fully objective with this adaptation. I love the original Prince of Egpyt film, so I am always going to partial to that version and very sensitive to any changes made to any of my favorite songs. With that said, this original cast recording of the West End cast of the stage adaptation is pretty strong. Sure, there are some changes made that I don’t love, but there are also some changes made that I really love. Some of the new songs work better than others, but isn’t that always the case with stage adaptations of movie musicals? And while the album doesn’t really do a great job of explaining the plot to anyone who isn’t already familiar with it, it’s not like the film’s original six songs did a much better job. This cast recording is certainly an enjoyable listen and, as a fan of the film, I’m mostly happy with it. While I wouldn’t go so far as to rank it among the best film-to-stage adaptations, it is a good one.

Perhaps the first thing to discuss when talking about a stage adaptation of an existing movie musical is how good are the new songs? Well, I wish I had more universally positive opinions. It’s not that Stephen Schwartz’s wealth of new material is bad, but it’s definitely a mixed bag. Some of them are really good (“Faster,” “Make it Right,” “Moses in the Desert,” “Always on Your Side,” and “For the Rest of My Life”); some are really bland and forgettable (“Never in a Million Years,” a very generic love ballad sung by Moses and Tzipporah; “Simcha,” a watered-down retread of “Through Heaven’s Eyes,”); and the rest are range from good to alright. It is nice to hear a song like “Footprints on the Sand,” a song which I really didn’t like when it was initially released a few months ago, end up sounding a lot better when combined with its finished arrangement.

Schwartz, orchestrator August Eriksmoen, and musical arranger Dominick Amendum, do a pretty good job at ensuring the new music and the old music don’t sound too dissimilar and Schwartz proves that he’s still capable of writing some good bangers. It’s just that there are also some clunkers in the mix. A lot of just sounds like generic Stephen Schwartz, which isn’t inherently a bad thing as generic Stephen Schwartz is still better than a lot of other composer/lyricists. But some of these new songs lack that original spark that made the original songs stand out. This is one of those rare cases where I think a couple of the songs could actually stand to be cut from the show because they feel redundant or slow everything down too much. But, at the end of the day, the new material isn’t quite the homerun longtime fans might want it to be, but much of it is still pretty solid and catchy – which is more than can be said for some other additions to some of the animated film-to-stage adaptations from a certain other company.

The same is true, though in a less extreme way, for the five songs carried over from the film. “Deliver Us,” “All I Ever Wanted,” “Through Heaven’s Eyes,” and “When You Believe” are basically as you remember them being, with “Deliver Us” and “All I Ever Wanted” featuring a few new lyrics that don’t prove too distracting and, in the case of “All I Ever Wanted,” actually improve an already solid song. “The Plagues,” however, is another story entirely. Pretty much the only thing carried over from the film version of the song is its chorus; all of the verses have been totally dropped and it’s extremely jarring. In their place are some remixed lyrics from one of Schwartz’s new songs, “Make It Right,” as well as some remixed lyrics from “All I Ever Wanted” for Rameses’ mother to sing. While the new version totally makes sense in the context of the musical, and in the restrictions of telling this story on stage within a reasonable budget, I do miss the original verses of the song. I feel like there could still have been a way to incorporate those lyrics into the new direction they took the song. I’d have much preferred the film’s original, more subtle lyrics to the bluntness of the “Make It Right” reprises. But, I am happy they at least kept the incredible, iconic chorus and the song does still mostly work, so I’m only a little bitter. I do like that even though “Playing With the Big Boys Now” was cut from the show, a bit of it survives in this new version of “The Plagues.” That’s a nice touch.

It may sound like I had some major problems with the album, but I did honestly enjoy it quite a bit – even with the new songs I didn’t love. And a lot of that comes down to the excellent performances from the show’s company and the album’s truly impressive production. It can’t be easy to follow in the footsteps of actors and singers like Amick Byram, Ralph Fiennes, Sally Dworsky, Michelle Pfeiffer, and Brian Stokes Mitchell, but the cast of this production of The Prince of Egypt has done a remarkable job. Luke Brady imbues his Moses with an everyman sensibility that works really well. Liam Tamne takes Rameses in a bit of a different direction than Ralph Fiennes took him in the film, but it’s a direction that totally works and proves very fun to listen to. This is true for the entirety of the cast as well. All of them do some truly remarkable work on this album and it’s impressive to hear. And what of the voice of God, I hear you ask. Well, the album makes the clever decision to have the entire company sing those lines in unison, providing God with a suitably strong, representative voice. It’s a really neat moment in the Act 1 finale.

Similarly on point is the album’s production value. Co-produced by Schwartz and Amendum, the album sounds amazing – both on an artistic level and on a technical one. As I mentioned earlier, Schwartz, Eriksmoen, and Amendum have managed to seamlessly incorporate the newer additions to the score among the older pieces. Schwartz’s revised score (now excised of most of Zimmer’s work from the film), Eriksmoen’s orchestrations, and Amendum’s arrangements give the whole piece a sense of cohesion that is often missing in these animated film-to-stage adaptations. There are motifs, both new and old, that flow throughout many of the songs and go a long way toward making the new songs feel like the old ones and vice versa. It’s actually really impressive how cohesive it all sounds, given some of these songs were written the better part of fifteen-twenty years before some of the others.

Equally impressive is the album’s production value. I’m not sure who did the mixing on this album, but whoever did should be given all the praise because it sounds incredible. I appreciated the careful balance that was found in ensuring both the music and the performers could be heard, without either overpowering the other. All of the instruments are crisp and clear, as are all of the vocal performers. That perfect balance is found and it just sounded like heaven. Even though I’m not a musician, I appreciate being able to clearly hear the various instruments and some of the complexities in the arrangements of a musical and I was able to hear all of that with this album. Whoever was responsible for the final mix deserves some of the biggest kudos in the world. And that kudos should also extend to everyone involved in the production of the album, from the performers to the orchestra to the recording crew. It’s a really good sounding album.

I was always going to be harder on The Prince of Egypt’s cast recording than I might have been on one for an original musical, but I’m genuinely impressed at how much I enjoyed it. While I don’t love all of the new songs or all of the changes made to the existing songs, I did enjoy the vast majority of this album. It features some great performances from the entire cast, an excellent score by Schwartz, and some really impressive orchestrations and arrangements from Eriksmoen and Amendum, respectively, that go a long way toward giving the whole piece a sense of cohesion that is often missing from many other movie musical-to-stage musical adaptations. Plus it just sounds really good on a technical level. It’s an album that should please old and new fans alike, even with the changes it’s made to its source material. I think the piece as a whole overcomes any real nitpicks I have with the additions and changes made to the film. I’ve always wanted a stage adaptation of the film and I’m happy one exists that’s as solid as this one.