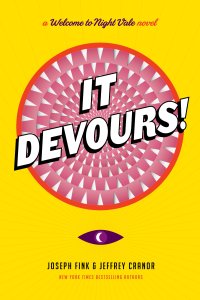 A friendly desert community where the sun is hot, the moon is beautiful, and citizens keep disappearing, leaving behind nothing but pits of warm, scorched earth. This is the world of It Devours!: A Welcome to Night Vale Novel. Written by Joseph Fink and Jeffrey Cranor and based on the popular podcast, Welcome to Night Vale, It Devours! is a new page-turning mystery about science, faith, love, and belonging, set in a friendly desert community where ghosts, angels, aliens, and government conspiracies are commonplace parts of everyday life. It explores the intersections of faith and science, the growing relationship between two young people who want desperately to trust each other, and the terrifying, toothy power of the Smiling God.

Nilanjana Sikdar is an outsider to the town of Night Vale. Working for Carlos, the town’s top scientist, she relies on fact and logic as her guiding principles. But all of that is put into question when Carlos gives her a special assignment investigating a mysterious rumbling in the desert wasteland outside of town. This investigation leads her to the Joyous Congregation of the Smiling God, and to Darryl, one of its most committed members. Caught between her beliefs in the ultimate power of science and her growing attraction to Darryl, she begins to suspect the Congregation is planning a ritual that could threaten the lives of everyone in town. Nilanjana and Darryl must search for common ground between their very different worldviews as they are faced with the Congregation’s darkest and most terrible secret.

If you like the podcast Welcome to Night Vale, then you’ll definitely like this book. Like the first novel, It Devours! doesn’t require a knowledge of the podcast – though having one will definitely enrich your experience tenfold. Nonetheless, this book is totally accessible to all newcomers to Night Vale. As a novel, it’s even better than the first one – and I thought the first one was pretty darn good, to begin with. While the first one answered a lingering question about a particular character (The Man in the Tan Jacket), It Devours! ends up exploring an unanswered question about the very lore of the podcast itself: What is the Smiling God and what happened to Carlos while he was in the Desert Otherworld? Those two questions end up being at the center of this book. And, thankfully, the answers to those questions do not disappoint. In fact, the answers open up new questions altogether.

While Nilanjana is most definitely the main character of the novel, followed closely by Darryl, Carlos plays a large part, too, being the catalyst that launches Nilanjana into solving the mystery that’s at the center of the novel. Ever since Carlos returned from the Desert Otherworld, he’s been running tests from his lab to try and understand the House That Doesn’t Exist (It looks like it should exist, it’s positioned between two other houses, but it’s actually a portal to the Desert Otherworld). The thing is, every time he runs a test, the ground violently shakes somewhere in Night Vale, throwing off his results. Add to that City Council threatening him if he doesn’t cease his investigation and we’ve got a very frustrated Carlos. Subsequently, he asks Nilanjana to help him investigate what’s causing the rumbling in the desert so he can get his investigation of the House That Doesn’t Exist back on track. 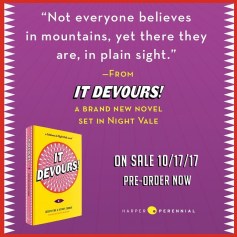 Nilanjana’s investigation leads her deep into the desert to Darryl and the Joyous Congregation of the Smiling God. The further into the mystery she gets and the closer to Darryl she gets, the more confused Nilanjana becomes. It Devours! is a genuinely moving story with a gripping mystery that provides a respectful and interesting examination of the intersection between science and religion. What happens when a devout scientist and a devout member of a religion must team together to stop a common threat? It Devours! answers that question in typical Night Vale flare: nothing is as it seems and anything is possible. The best part is that the book is full of red herrings. Every time you think you’ve got a handle on what’s causing everything that’s happening and who’s behind it, Fink and Cranor rip the carpet from under your feet and send you spiraling in an entirely new direction. But, once you find out the ultimate answer to the mystery, you realize that clues to the real answer were littered throughout the book – the way that all good mystery novels should be constructed.

There is so much in It Devours! to like. The main character is a woman of color who is also a scientist, the mystery revolves around a genuinely respectful look at religion (even if the religion being examined is a satire of American Evangelicism) that doesn’t actually belittle those who believe in religion, the character development and world building is absolutely stunning, and it’s a page-turning mystery in the style of old-school pulp novels. Plus there’s a really wonderful parody of those infamous Chick Tracts, extremist evangelical propaganda (in comic book form) marketed to children from the late Jack Chick, illustrated by Jessica Hayworth. As The Joyous Congregation of the Smiling God is a very obvious satire of American Fundamentalist churches, it only makes sense for the Joyous Congregation to have religious tracts in the style of those written by Jack Chick. And, let me tell you, the tracts in It Devours! are 100% every bit as ridiculous as the real-life religious tracts they’re satirizing. 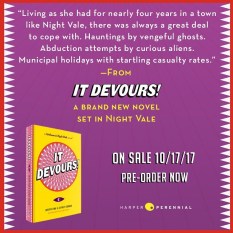 I hesitate in revealing too much of the specifics of the novel. So much of it is just so enjoyable the first time you read it that it would be a shame for me to spoil any of the narrative tricks. Needless to say, Fink and Cranor’s love of words is very much on high display here, as it is in the podcast. As is there attention to characters – especially in Nilanjana. It’s amazing how fleshed out they’ve made her feel. She feels like a completely real person. It helps that much of the novel is from her point of view, and it’s in that third-person-almost-omniscient point of view, so we frequently get to witness her thoughts. She’s just a wonderful character and I’m so pleased this book follows her story. Darryl, too, is an interesting character. His blind belief in his religion proves a point of contention between him and Nilanjana and seeing the two of them navigate their way through that point of conflict is a large and enjoyable aspect of the novel and central to the solving of its mystery. 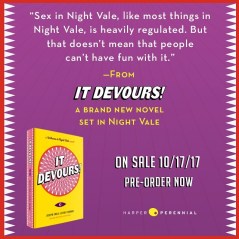 If I had one complaint about It Devours!, it would be that sometimes Fink and Cranor can get carried away with their narration. The book is styled as a mystery novel, so naturally, as the story goes on, the pacing gets faster and faster as we build to our climax. Unfortunately, Fink and Cranor tend to do this thing where they’ll go off on a tangent that completely breaks the flow of the story they’ve set up. They’re always brief tangents, but they’re just long enough that the pacing is briefly broken and they have to ease you back into the mystery. It’s a bit frustrating when this happens so far into the story because, at that point, you don’t want anything slowing the pacing down, and it’s just slightly aggravating when it happens. It’s really not a major problem or anything, just a personal nitpick. On the whole, it’s very much an enjoyable book, and this little nitpick is just that. It doesn’t ruin the experience of the novel at all. 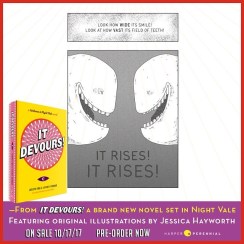 All in all, It Devours! is an utterly fantastic read. It’s an excellent mystery, an excellent character piece, and a genuinely respectful look and critique on religion and science. It expands the world of the podcast while also answering major questions that have been raised. The characters are developed in ways that are both surprising and also respectful to who they are as characters – especially those that have already had roles in the podcast. The characters introduced in the novel are memorable and quickly earn their place in the ever-increasing roster of Night Vale characters. It Devours! is a book for everyone: it’s a book for fans of the podcast, fans of science fiction, fans of conspiracy, fans of satirical looks at religion, fans of mysteries, and fans of good stories in general.