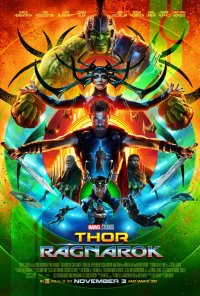 Better late than never, I suppose. At least Thor: Ragnarok ended up being the best Thor film that Marvel has produced thus far. Directed by Taika Waititi and written by Eric Pearson, Craig Kyle, and Christopher Yost, Thor: Ragnarok follows our favorite God of Thunder, Thor (Chris Hemsworth), as he faces off against his sister, Hela (Cate Blanchett), and the imminent threat of Ragnarok: the ultimate destruction of Asgard. Thor’s world is about to explode. His devious brother, Loki (Tom Hiddleston), has taken over Asgard, the powerful Hela has emerged to steal the throne for herself and Thor is imprisoned on the other side of the universe. To escape captivity and save his home from imminent destruction, Thor must first win a deadly alien contest by defeating his former ally and fellow Avenger – The Incredible Hulk (Mark Ruffalo). (As always, spoilers may follow)

First things first: Thor: Ragnarok is easily the best Thor movie to date. While I quite enjoyed Kenneth Branagh’s Thor, I found Alan Taylor’s Thor: The Dark World to be a boring mess of a film. So, imagine my glee when Taika Waititi, hot off the surprising success of What We Do in the Shadows (and the soon-to-be-successful Hunt For the Wilderpeople), was announced as the director of Thor: Ragnarok. If anybody could take a character like Thor who had been in one fairly good film and one mediocre as hell film and propel him into a truly great film, it would be Waititi. This assumption was a good one. Waititi truly understands what makes Thor a fun character to explore. In interviews, he’s been quoted as saying that his goal with this movie was to make Thor the coolest person in whatever room he was in. I’d say he achieves this goal with flying colors.

Before we continue on with the good parts of the film, we ought to take a moment to discuss the not-so-good parts. In particular, Thor: Ragnarok has a lot of tonal problems. It’s like Waititi – and writers Eric Pearson, Craig Kyle, and Christopher Yost – took bits of two separate Thor films and smashed them into one bit. On the one hand, you’ve got a slapstick buddy comedy with Thor, the Hulk, Loki, and newcomer Valkyrie (Tess Thompson) set on the junk planet of Sakaar, led by the malevolent – and truly ridiculous – Grandmaster (Jeff Goldblum). Then, on the other hand, you’ve got a serious melodrama featuring Hela and the destruction of Asgard. Thor: Ragnarok weaves those two obviously distinct premises together and, as a result, contains a clash of tones. One scene will be laugh-out-loud ridiculous and the next will feature Hela nearly committing genocide on some innocent Asgardians. It doesn’t quite mesh together tonally.

That being said, plot-wise it works surprisingly well. Thor: Ragnarok is actually one of the best paced Marvel films ever made. The scenes are long enough that it truly feels like the characters are driving them and there’s plenty of room for character growth and genuine moments of bonding between the characters, but they’re never too long that the film grinds to a halt. One scene clearly leads to the next scene and the film bounces back and forth between its premises fairly logically. It’s nothing short of a miracle that these two completely different plotlines genuinely work together to produce a coherent and enjoyable film.

This largely comes down to the dialogue of the film. It’s been reported that much of the dialogue was improvised on set, as is Waititi’s style of filmmaking. Watching the film, it does feel like that’s the case. The dialogue bounces off the characters in such a natural way that it truly doesn’t feel like it could’ve been written beforehand. And it’s because of this natural improvisation that these characters feel like real people. You believe what’s happening, no matter how ridiculous or tonally inconsistent it is because of the fact that the characters believe what they’re saying. The dialogue flows naturally and establishes the history between the characters and goes a long way towards making all of these fantastical story elements feel grounded and real.

Add to all of that some genuinely inspired directing from Waititi. I’ve seen some criticism of the fight scenes in Thor: Ragnarok and I can’t say I agree with them. At all. I found the fighting to be lots of fun. Stylistically, they fit right in in this film that doesn’t take itself remotely seriously. They didn’t need to be super choreographed like they are in the other MCU films. They were stylistically interesting and consistent with the film, and I respect that choice. I found them to be some of the most interesting and fun fight scenes in an action film I’ve seen in a while. Waititi, in addition to bringing his trademark humor to the film, also led a talented team of designers, editors, and actors. Thor: Ragnarok is a beautiful film. It perfectly balances the whimsical nature of the Thor universe with the serious touches parts of the story needed. There are some truly inspired music choices in the film. I won’t spoil it too much, but my favorite one involves a certain Led Zepplin song that just makes me smile when I think back on the scene it’s used in.

And the actors. Oh, the actors. It’s so obvious just how much fun everyone had making this film. It genuinely shows in their performances. Never before has Chris Hemsworth looked so alive in the role of Thor. He relishes every moment of it and he finally gets to bring Thor to life in a fun and interesting way. Tom Hiddleston, while not given a whole lot to do story-wise brings a similarly fun performance as Loki. Mark Ruffalo is given a chance to shine as Bruce Banner/The Hulk. Somehow Thor: Ragnarok genuinely makes the Hulk an interesting and sympathetic character. Not just Bruce Banner. I mean, for most of the film, it’s just The Hulk and The Hulk is actually given more of a character than just “Hulk smash”! It’s great. Tess Thompson is lots of fun as Valkyrie. It’s nice to see a woman get to play the “Han Solo” type character as she spends half the film drinking her sorrows away and the other half kicking some major ass. Jeff Goldblum puts on his best Jeff Goldblum impersonation as the Grandmaster and it’s deliciously campy. Cate Blanchett, similarly, is wonderfully campy as Hela. It feels a touch out of place given the seriousness of her storyline, but it’s just so much fun to watch her chew up the scenery.

It’s not a perfect movie by any means. I’m a little peeved at how they handled the concept of Ragnarok. In Norse Mythology, it’s the ending of EVERYTHING. All nine realms, all the gods, everything. It’s basically the Norse equivalent of the Christian apocalypse. This isn’t the case in Thor: Ragnarok. The Thor series has always played fast and loose with Norse mythology, just like the comics did, but this sorta peeved me just a bit more than usual because it feels like the threat of Ragnarok just wasn’t taken seriously enough (probably because half the film was a buddy comedy set on a different planet). But, nonetheless, Thor: Ragnarok is the most fun at a Marvel film I’ve had since the first Guardians of the Galaxy. It’s silly, well directed, well acted, well written, enjoyable film. It doesn’t take itself too seriously nor does it spend a whole lot of time trying to set up future MCU films. It’s genuinely a stand-alone film. You could see this movie without having seen the past few Marvel films and without seeing any future ones and you’d have a complete story. That’s more that can be said for a lot of Marvel films these days.