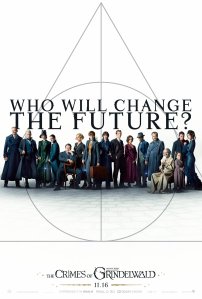 Today was the Warner Brothers panel at Comic-Con and the first thing they did was debut a new trailer for the upcoming Fantastic Beasts: The Crimes of Grindelwald. It’s our first look at the film since the teaser trailer was released back in March. This trailer is nearly double the length of the first one and features a whole lot of new footage and much better look at both the tone and content of the film. Written by J.K. Rowling and directed by David Yates, Fantastic Beasts: The Crimes of Grindelwald is the sequel to 2016’s Fantastic Beasts and Where to Find Them. It continues the story of Newt Scamander (Eddie Redmayne) as he is tasked by Dumbledore (Jude Law) to help track down and defeat wizard terrorist Gellert Grindelwald (Johnny Depp). It is due to be released on November 16, 2018, and also stars Katherine Waterstone as Tina Goldstein, Dan Fogler as Jacob Kowalski, Alison Sudol as Queenie Goldstein, Ezra Miller Credence Barebone, Zoë Kravitz as Leta Lestrange, Callum Turner as Theseus Scamander, Brontis Jodorowsky as Nicolas Flamel, and Claudia Kim as a currently unnamed Maledictus.

At the end of the first film, the powerful dark wizard Gellert Grindelwald was captured by MACUSA (Magical Congress of the United States of America), with the help of Newt Scamander. But, making good on his threat, Grindelwald escaped custody and has set about gathering followers, most unsuspecting of his true agenda: to raise wizards and witches up to rule over all non-magical beings. In an effort to thwart Grindelwald’s plans, Albus Dumbledore enlists his former student Newt Scamander, who agrees to help, unaware of the dangers that lie ahead. Lines are drawn as love and loyalty are tested, even among the truest friends and family, in an increasingly divided wizarding world.

This trailer is really spectacular. I mean it’s exciting, beautiful, enticing, and such a huge tease. It never reveals too much but also doesn’t skimp out on the reveals. There’s so much in the trailer that it’s hard to sort of break it down into something one can talk about. There’s a lot of new footage in the trailer and it’s accompanied by a pretty great score and it all just looks really exciting. I enjoy that I still have no idea what the plot of the film is; I mean I know it’s, generally speaking, going to involve Newt trying to confront Grindelwald, but we still have no idea how all these different characters factor into that story and how it’s all tied together and that’s really exciting. This trailer does a great job at teasing those different plot threads without actually spoiling the whole film and explaining how they’re all connected. It’s very much a case of “see all this stuff that’s in the movie now actually come see it so you can understand how all the pieces fit together.” I like that.

The biggest takeaway, for me, is Johnny Depp’s performance as Grindelwald. I really wasn’t a fan of his appearance at the end of the first Fantastic Beasts film; I thought he just looked silly in the makeup and that he didn’t really offer anything unique. It just felt like typical, stale Johnny Depp. That seems to be different in this trailer. There’s still not a whole lot of him, but there’s a lot more than there was in the first film. Here, he actually seems menacing. It actually seems like he’s giving a performance and I’m starting to see why he was cast in this role in the first place and why the cast and crew were so excited about him being part of the franchise. In this trailer, he definitely makes for a good villain and he delivers some of these speeches really well. He does feel like a nasty politician, which is kinda what they seem to be going for according to various interviews. They actually had Johnny Depp appear at the Comic-Con panel in character as Grindelwald and deliver a speech and he really nailed it. Between his appearance on the panel and his performance in this trailer, I’m actually looking forward to seeing what he brings to the table with his acting in this movie.

The other big takeaway is how things in this movie really begin to connect with the original Potter series. The most obvious connection is the appearance of Jude Law’s Albus Dumbledore in this movie. I still suspect that these trailers have basically shown us the majority of Dumbledore’s appearances in the movie as I don’t expect them to be utilizing him all that much this early in the series. We know Fantastic Beasts films are building up to Dumbeldore and Grindelwald’s final confrontation in 1945, so it makes sense to hold back some of their backstory and really hold back on Dumbledore in general. That being said, we did get a really nice teaser about their relationship (and hope that it will actually be explored at all) in a brief shot where Dumbledore sees Grindelwald in the Mirror of Erised. The whole thing about that mirror is that it shows the seer their deepest desire. That shot seems to imply that at the time Dumbledore is gazing into the mirror, his deepest desire is Grindelwald. Whether that’s romatnically or platonically is unknown, but it still hints at that deep connection between them that I’m confident will be explored over these remaining four films.

There’s also a lovely scene at the end of the trailer featuring Jacob and our first look at Nicolas Flamel himself. It’s pretty exciting getting to finally see this character whose influence was felt all over the very first Harry Potter novel, the Philosopher’s Stone. He doesn’t look at all how I’d figured he’d look, but I actually really like the way they’re portraying him. It makes sense that someone who’s been relying on the Philosopher’s Stone this long to survive would look so feeble and weak and it seems that Brontis Jodorowsky is a really good fit for the character in general. Flamel and Jacob have a pretty funny exchange and it really makes me excited to see just how Flamel factors into this story.

Overall, this trailer is super exciting. So much is shown in it: a scene with Dumbledore and a Young Newt where we learn what his Boggart is (a desk from the Ministry of Magic; Newt is scared of working in an office), more scenes between Newt and Dumbledore where we get a better sense of their relationship, some glimpses at just what Credence is up to these days with the Wizarding Circus, and a really nice line from Leta Lestrange where she says that Newt’s never met a monster he couldn’t love. Those are all just small bits of this trailer because there’s just so much in it and so much to get excited for. I love the Wizarding World and I loved the first Fantastic Beasts film. This trailer did everything it could to get me excited for The Crimes of Grindelwald and it’s worked. I am beyond pumped for that film and I can’t wait for it to come out.

Fantastic Beasts: The Crimes of Grindelwald arrives in theaters on November 16, 2018.