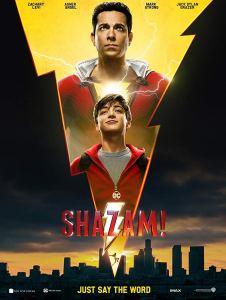 Who would have thought that Shazam, of all movies, would end up being not only one of the best DCEU movies in years but one of the best superhero origin films in quite some time? Perhaps it’s down to my lack of familiarity with the character and, subsequently, my lack of any real expectations for the film, but I was pleasantly surprised by Shazam. It’s not particularly unique, or anything, but it is the most fun I’ve had with a superhero movie since Thor: Ragnarok, and that’s worth celebrating. Combining lots of humor, great visuals, solid acting, and genuine pathos, Shazam is a superhero movie that will bring out your inner kid as you watch it. It’s a whole lot of fun. (Mild spoilers for the film follow.)

We all have a superhero inside us, it just takes a bit of magic to bring it out. In Billy Batson’s (Asher Angel) case, by shouting out one word–SHAZAM!–this streetwise 14-year-old foster kid can turn into the adult Super Hero Shazam (Zachary Levi), courtesy of an ancient wizard. Still a kid at heart–inside a ripped, godlike body–Shazam revels in this adult version of himself by doing what any teen would do with superpowers: have fun with them! Can he fly? Does he have X-ray vision? Can he shoot lightning out of his hands? Can he skip his social studies test? Shazam sets out to test the limits of his abilities with the joyful recklessness of a child. But he’ll need to master these powers quickly in order to fight the deadly forces of evil controlled by Dr. Thaddeus Sivana (Strong).
(Written by Henry Gayden, directed by David F. Sandberg)

While nothing in Shazam is particularly new or original – outside of the fact that this superhero is actually a kid who gets transformed into an adult hero – the film does a superb job at ticking off all of the checkmarks needed for a successful origin story – and does so with magnificent style. Perhaps the most important thing an origin story needs to do is introduce the audience to the superhero and make them care about that hero. Surprisingly, this is something that certain recent superhero films have forgotten; they just assume we’ll care about the hero and never really bother to develop them in any meaningful way that will allow us to actually connect with who they are as a person. Shazam does not fall into this trap. From the moment we meet Billy Batson, we’re drawn into his character. Like many other heroes, he’s a kid without parents, but unlike those heroes, his parents are still alive – they just don’t want him. So, we meet a kid who’s been moved around the foster system as he keeps acting out, trying to find his birth mother that he believes will still want him. After getting into trouble once again, he’s moved to one final foster home where he meets Freddy (Jack Dylan Grazer), his disabled foster brother who’s obsessed with superheroes. Through some magical stuff, Billy ends up receiving superpowers and spends the rest of the film coming to grips with his powers while also trying to find his own family. We relate to Billy so well because, on top of his journey toward mastering his powers, he has a character arc that has absolutely nothing to do with him being a hero. We get to see him as a human being; we understand his wants and his needs and we get to see him grow into the hero – both emotionally and physically – he’s meant to be. I also really dig the super positive representation of foster families here. They still don’t get enough love. 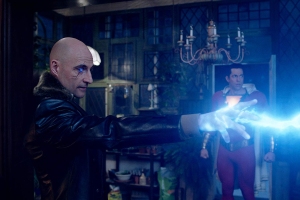 The next thing that Shazam does right is firmly establishing its villain right off the bat. You’d think a movie that’s meant to establish Shazam as a hero in the DCEU would open with a scene related to either Billy Batson or his family (think Aquaman), but nope. The movie opens with a scene establishing the villain – Sivana. We meet Sivana as a child who feels unwanted by his family. He quickly gets summoned by the magical wizard who controls the “Shazam” powers. Turns out that the Wizard is looking for a successor to his powers – someone who can keep the Seven Deadly Sins under control – and needs to find a person who’s pure of heart. Naturally, Sivana is not and so the wizard unceremoniously dumps him, creating in Sivana a lifelong grudge that leads to him ultimately returning to the wizard’s lair and teaming up with the Seven Deadly Sins in order to defeat the wizard – and to gain the Wizard’s power by stealing it from Billy Batson. A lot of villains recently have had these grand plans of either world domination, or wanting to overthrow the status quo, or wanting to destroy half of the universe or whatever, and that’s all well and good, but it’s also nice to sometimes have villains with simple motivations. Sivana is just a hurt little boy who wants revenge on his father, on the Wizard who said he wouldn’t be special, and on Billy Batson for receiving the powers he always wanted.

That directly relates to my other favorite aspect of the film: the stakes. Too often, superhero movies have stakes that are way too high, even more so in origin stories. Aquaman featured Aquaman having to stop an underwater king from waging literal war on the surface world – something that doesn’t really do anything to develop Aquaman as a character. Captain Marvel featured Captain Marvel having to stop one alien race from destroying another alien race – something that only kind of has anything to do with her development as a character. In Shazam, Billy Batson has to understand who his family is, gain confidence in himself, and defeat a villain who wants to take away his newfound family from him if he can’t have Billy’s powers. The stakes are life and death for Billy and Sivana, but they’re relatively small in the vast scheme of things. This isn’t an end-of-the-world scenario, even if the third act battle does get a bit too “destroy parts of the city”-esque. The plot directly ties into the character development of both Billy and Batson. They’re two sides of the same coin; both children who were unwanted by their families, needing to deal with the impact of that. Billy learns to find love in his foster family while Sivana wants to take revenge on those who wronged him. Sivana is the dark inverse of Billy and so defeating Sivana could equate to overcoming Billy’s own demons. It makes for a pretty compelling battle in an origin film – one that’s way more interesting than another story with end-of-the-world stakes. If I had one complaint, it would be that the Seven Deadly Sins are never fully realized. They’re totally indistinguishable from each other, both in terms of their powers, personalities, and looks. While their designs are cool, there doesn’t really seem to be any correlation between their design and the sin they represent and that feels like a missed opportunity. They’re not really the villains here and there’s plenty of room to develop them further in the future, but it was a detractor from this film.

All in all, I really dug Shazam! It’s a fun movie with a really strong cast, some great visuals, and a fairly competent screenplay. I dug a lot of the character work, I dug how the main conflict actually tied back into that character work, and I dug how the film managed to strike a good balance between its worldbuilding and the needs of the story as a standalone film. While other recent superhero origin films succeeded solely based on the likability of their lead actors, Shazam has a likable lead actor and some decent writing – again, nothing particularly amazing; it does what it needs to do while still having some fun with the tropes of an origin story. Much of the movie is carried by the chemistry between Zachary Levi and Jack Dylan Grazer, but the movie doesn’t succeed solely on that chemistry. I cared more about the characters in Shazam – not just Billy Batson, but all of his foster siblings – than I have for any of the non-heroic characters in any of the recent superhero movies. For me, Shazam just had a lot of heart that seemed to be missing from recent superhero fare. It’s nothing groundbreaking, but it was a lot of fun. I left Shazam definitely wanting to see more of him and that’s something I can’t say for nearly any superhero movies since Thor Ragnarok. Ultimately, Shazam is nothing special, but it’s a helluva good time.