This film isn’t normally the kind of film I’d review on here, nor is it really the kind of film I’d actively seek out to watch on my own. I tend not to be the kind of person who really enjoys these kinds of coming-of-age stories; they often feel like they were written by people who long ago forgot what it was like to be a teenager and, as someone who isn’t that far removed from his teenage years, I tend to find that kind of writing uninteresting, at best, and downright insulting at worst. That being said, I am often drawn to darker teenage films; those that explore the less sunny sides of being a teenager/young adult often find ways of drawing me in. So, when the distributors of this film, TriCoast Entertainment, reached out to me and offered me a screener of the movie in exchange for an honest review of it, I read the brief synopsis, got intrigued, and thought I’d give it a shot and see how I felt about this film. As I tend not to be the target audience for these kinds of movies (I often find myself getting bored in more “realistic” films that aren’t comedies/action/sci-fi/fantasy/horror films), I am gonna do my best to approach this from as objective a point of view as possible. Does Adolescence work as a film for the audience it’s trying to reach? The answer is, I think, mostly. (Mild spoilers may follow.)

“Adolescence” (written by Cal Barnes, Mickey River, Chris Rossi, and Ashley Avis; directed by Ashley Avis)
When a creative, sensitive teen from a dysfunctional family, Adam (Mickey River), meets a beautiful, enigmatic runaway, Alice (India Eisley), his life is turned upside down as he travels the dark path with her toward parties and drug addiction.

These kinds of coming-of-age stories live and breathe based on the relatability of their lead characters. Can the audience connect with the struggles said characters are going through? The characters don’t necessarily need to be likable, but they do need to be well-defined. Adolescence suffers a bit here. For all intents and purposes, Adam is the main character of this movie. It is him who we are introduced to in the first scene – a scene set during his childhood as he witnesses his mother flirt with one of her “friends” and as he watches the slow deterioration of his parents’ relationship. Cut to the end of his high school days: very little has changed. His parents are still together, though, barely, and still constantly at each other’s throats. He’s grown into this awkward loner-type who has trouble speaking to new people. After some prompting by his friend, Keith (Romeo Miller), he introduces himself to Alice and the two quickly get entangled in each other’s lives – for better and for worse (and it’s mostly for worse). The two pretty quickly get involved in some pretty heavy stuff – drugs, theft, etc, and it all basically falls apart around them.

If this sounds like the plotline to a dozen other similar films, you wouldn’t really be wrong. The writing is easily the weakest part of the movie. If you’re gonna tackle such an often told story, you either need to feature some wholly unique characters or attack the subject matter from a new angle. Adam and Alice are not particularly unique, or even well developed as characters. Most of the characterization we get from Adam is pretty standard stuff – he has a troubled home life because of how his parents fight in extremely abusive ways and how he doesn’t really fit in – and before we can really get to know him any deeper than that, the film introduces Alice – a character even less developed, ending up feeling like nothing more than the standard mysterious runaway girl trope who ends up into some bad things – and the audience is swept up into their story together. While much of Adam and Alice’s extremely toxic romance is done very well, without a deeper connection to the two characters, it does end up just feeling like things I’ve seen before. 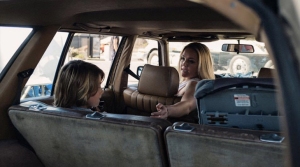 On the flip side, the movie does appear to try to tackle the subject matter from a different point of view as it tries to tie in Adam and Alice’s drug use with Adam’s mom, Jennette’s (Elisabeth Röhm), struggle with drugs. The idea of the cyclical nature of abuse (of people and of drugs) is definitely introduced with Adam’s parents and their volatile relationship, but it never really gets explored as deeply as you’d want it to. It feels like there was an idea there that could have been really interesting, but it was dropped before it could develop to that point. In fact, much of the movie feels like there are scenes that are just missing. It frequently feels like the movie doesn’t flow right. Something will happen in one scene, but in the very next scene, the characters seem to be reacting as if the exact opposite happened. It was frequently disorienting for me and I’m not sure if it was intentional or if a chunk of the script ended up being cut but it really didn’t gel right. All in all, the film didn’t entirely work for me from a writing standpoint. It wasn’t particularly bad, or anything, and there were a number of scenes I liked quite a bit – especially toward the end as the movie started tying its threads together and really stating its thesis, but I can’t help but feel a little disappointed in the lack of solid development for the two main characters. There is quite a bit to like about the movie – most notably its dialogue – but there is a lack of solid character development. Perhaps that’s intentional, but that lack of development didn’t quite work for me. 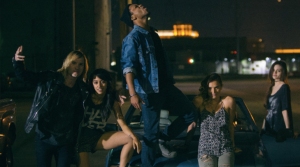 That being said, much of the rest of the film is very good. Mickey River and India Eisley give very good performances in the movie. While, visually, I was never convinced that River was actually the right age to be playing an eighteen-year-old character, his actual performance rang fairly true. Similarly, Eisley was utterly captivating. It’s very easy to understand why Adam would so quickly fall for Alice and I really appreciated the way that Eisley brought a level of ambiguity to Alice’s actions – particularly in the second half of the film. In that latter portion, the audience isn’t really supposed to sympathize with Alice anymore, but I feel like Eisley’s performance kept Alice from feeling like a completely unsympathetic character; sure, she wasn’t treating Adam very well, but Eisley ensured that Alice still felt very human. The rest of the cast gives equally good performances, but the most notable supporting performance is probably Tommy Flanagan as Shepherd. At first, I didn’t quite understand what the character was about, but by the third act, it’s definitely clear what his role in the story is and Flanagan portrays him with such a genuine warmth that it’s hard not to enjoy his presence.

Ashley Avis did a very good job directing the film. While I have some issues with the script, she definitely ensured the film had a steady hand behind the scenes. Avis pulled out the best possible performances from all of her actors and, in coordination with her director of photography, Garrett O’Brien, and her editor, Douglas Crise, delivered a well-shot and well-edited film. Much of the film feels like the visual equivalent of what I’d imagine a drug-induced trip would be like, and that’s a choice that definitely works within the context of the film and immediately draws the viewer into the story. The second half of the movie features some pretty rough imagery, but it’s presented in such a way that doesn’t feel exploitative but also doesn’t feel romanticized. The three of them managed to film scenes with drug use in such a way that communicated the darker aspects of drug use without being too graphic. I was genuinely surprised with how well shot the film was; indie movies can always be a shot in the dark in terms of visual and audio quality, but this film was very well put together on a technical level. Additionally, I really dug Peter Gregson’s score for the film. It perfectly helped tie a number of sequences together and I found myself really getting into it. On a visual and technical level, this is a really well put together movie. I have absolutely no complaints in that regard.

All in all, Adolescence really isn’t the kind of movie that I like to watch. I’m not a fan of coming-of-age stories and this movie hasn’t made me one. That being said, it’s certainly not a bad film. While I have some issues with the script, it’s still a fairly well-made film with some very solid performances and a lot of well-filmed and well-edited sequences. I can absolutely see how this film would touch a number of viewers who might be more into this kind of film. While I wish the script had better developed its main characters and tied some of its themes together a bit better, I think it’s still a fairly-well executed story and a movie that is worth a watch for those interested in this kind of thing. It accomplishes the goal that most coming-of-age stories try to accomplish: it tells a portion of the life of a young adult and shows them learning a lesson. It’s not the most original story, but it’s one that will probably end up connecting to a lot of people. I’m not remotely upset that I watched this movie; I probably won’t watch it again, but that’s purely based on my own tastes in movies and not a statement on the quality of this movie. If this is your cup of tea, you’ll probably dig it. There’s quite a bit to like.

Adolescence is available now from all major streaming and digital download services (Hoopla, DirecTV, AT&T, FlixFling, inDemand, Vimeo on Demand, Amazon, Vudu, iTunes, XBOX, Sony, Google Play, Fandango, Sling/Dish). Thanks to TriCoast Entertainment for providing me with a screener for this movie in exchange for an honest review.