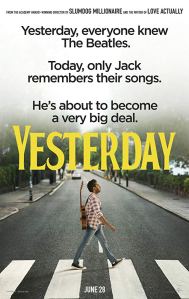 Every now and then you see a trailer for a movie that just seems so odd that you simultaneously wonder how it got greenlit and also how it’s never been done before. This was definitely the case when I saw the trailer for Danny Boyle’s newest film, Yesterday. In that trailer, we are invited to enter a world where the Beatles suddenly ceased to exist and nobody – except one man – could remember them. It’s such a delightfully strange premise that there were really only two ways the film could end up: a hot mess or a delightful surprise. Thankfully, it’s 100% the latter and it’s such a fun movie carried by a very charismatic lead and some solid filmmaking. (Mild spoilers follow.)

Yesterday (written by Richard Curtis, directed by Danny Boyle)
Jack Malik (Himesh Patel) is a struggling singer-songwriter in a tiny English seaside town whose dreams of fame are rapidly fading, despite the fierce devotion and support of his childhood best friend, Ellie (Lily James). Then, after a freak bus accident during a mysterious global blackout, Jack wakes up to discover that The Beatles have never existed… and he finds himself with a very complicated problem, indeed.