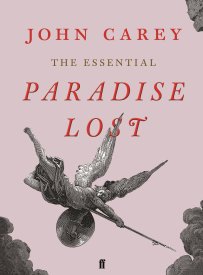 The Essential Paradise Lost is a book by John Carey that seeks to condense the legendary epic poem Paradise Lost by John Milton into a length more accessible to modern-day audiences by cutting out and summarizing the less relevant passages of the poem in order to focus more on the characters and the central story. Along with this new condensing of the poem comes several analytical essays about the meaning and impact of the poem, all penned by John Carey. The Essential Paradise Lost is a valiant attempt at making Milton’s dense poem more accessible to the general public; however, it doesn’t quite succeed.

I’ve only managed to read Paradise Lost through various translations that have tried to translate it into a more modernized English than the original poem is written in. As much as I love Milton’s style, it tends to be incredibly difficult for me to be able to give the poem as much attention as it deserves as my brain struggles to properly decode the language and syntax Milton uses. So, I’ve always found it easier to read modern English translations of the poem, but I was looking forward to seeing what this book would be able to offer.

I appreciated the attempt to condense the poem into a readable length by summarizing sections of the poem that weren’t as important to the overall story. This was a smart move on Carey’s behalf. And, to a degree, it worked. But I’m not sure it worked as well as he intended it to. The difference in style between the poem itself and the summaries of the missing sections was jarring to the point of taking me out of the experience altogether. It didn’t help make the poem much more accessible to me, unfortunately.

That being said, I think the essays at the beginning of the book proved particularly enlightening as did the annotations layered throughout the poem itself. I appreciated the analysis that Carey provided through those opening essays; they were probably the best part of the book. The annotations used throughout the poem helped provide context and understanding to some of the more difficult concepts and words, and that was incredibly useful.

Unfortunately, even with Carey’s attempt to condense the poem, I still find the poem itself to be largely dense and hard to tackle. A translation done in modernized English with Carey’s clear skill and love for the source material might have been a more successful route to have taken.

Regardless, it was a good attempt at condensing the poem, and for anyone with a passing interest in Paradise Lost, it is a must read!

The Essential Paradise Lost receives 3 out of 5 wands.

I received a copy of this book from Edelweiss, in exchange for a fair review.

The Essential Paradise Lost is published by Faber and Faber and can be purchased now as an ebook and on August 7, 2017, as a hardcover book.