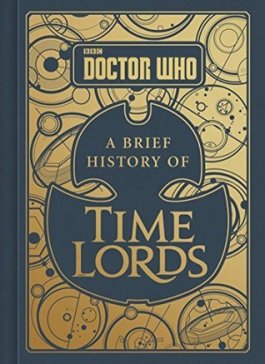 I enjoy when spin-off books are written as though they exist in the universe of the thing they’re spin-offs of (ie: the Hogwarts Library textbooks). Steve Tribe writes A Brief History of Time Lords from the point of view of the young boy that the Twelfth Doctor meets at the end of Heaven Sent. This boy grew up and went on to write an “unofficial” history of his planet and people that contained unofficial and forbidden knowledge. It’s a fun concept that’s executed fairly well. The big question with books like this is if they contain enough new material to make it worthwhile, or if they’re just a collection of older material crammed together into one thing so it can be sold for more money. A Brief History of Time Lords kind of fits into both categories. But, at least, it’s enjoyable.

For the most part, A History of Time Lords takes information about Gallifrey and the Time Lords from all aired episodes of Doctor Who (through the end of series 9 of the rebooted show) and organizes it into a cohesive history of the race and planet. That, alone, is nice since trying to go through 53+ years of Doctor Who to figure out the history of the Time Lords is a daunting task. It’s nice to have all that information organized in one handy volume. But what makes this book cool is that it also includes a bit of info from the Big Finish audios, various other novels/spin-off material, as well as the occasional new bit of information (that may just be speculation on Tribe’s part, but still).

The biggest bit of “new” information is that Susan may not be the Doctor’s granddaughter?? I knew that some spin-off material from (primarily) the 1990s had hinted at this being the case, but Tribe offers information that isn’t found in any of that material either. In this, he says,

“When the Doctor first left Gallifrey, he took with him a child, a daughter of the President. He called her Susan; she called him Grandfather. Some say that she devised the acronym TARDIS for our time-travel capsules. Records of her true identity and history seem to have been deliberately obscured, and we are left with competing mythologies. She may have been a direct descendant of Rassilon or of some other founding father of Gallifrey. Her original name may have been Larn, or it may have been Arkytior.

This contradicts pretty much every piece of information on Susan we have. Her being a descendant of one of the founders is from a novel, as are her other names, but no spin-off material that I found has ever discussed the possibility of her being the daughter of whoever the President of Gallifrey was at the time the Doctor left. If this is actually official information (which I don’t see why it wouldn’t be; as far as I know, the BBC/Doctor Who team sign off on every Doctor Who book that’s published), that raises two lines of theory: is Susan the Doctor’s granddaughter? If she isn’t, who is she? If she is, then does that mean the Doctor has a child who was the president of Gallifrey at the time the Doctor left the planet?

All of that is from one small paragraph in the middle of a chapter towards the end of the book, but it’s the thing that stuck out the most to me. It got me really excited about all the possibilities. I don’t want it to overshadow the quality of the book, though, even if I’ve spent most of this review talking about it. The book does a really good job at presenting information about the Time Lords. It’s crafted like a “tell-all” book written by the Gallifreyan boy (after he’s grown up) who the Doctor met at the end of Heaven Sent. The book presents a (mostly) chronological view of the Time Lords’ history. I wish more time had been spent on the Time War; some new information on that would’ve been nice. But, again, it did seem to reference some Big Finish audios that have always been implied as being part of the Time War, so that was nice.

Most all of the information comes directly from the TV series, but, like I said, that’s okay given how hard to follow all 53 years (1963-2015, the airdate of the last episodes referenced in the book) of Doctor Who can be. The information is presented in an easy to read, engaging way. It really feels like a book that you would find hidden away in some forbidden area of a library on Gallifrey. Steve Tribe did a good job compiling all this information and presenting it in a fun to read way. It’s a beautifully designed book with lots of pictures that accompany the events and people described within. It’s nothing monumental, but it’s a nice little book and a fun thing to own.

I give Steve Tribe’s A Brief History of Time Lords four out of five wands. I wish it was longer and had more new information that sort of bridged the various elements of Gallifrey’s history together. It would’ve been nice to know more about the Time War and more about what happened between The Time of the Doctor and Heaven Sent on Gallifrey. But these things are mostly me nitpicking. It’s a good read and a really nice thing to have. It’s just that more new information would’ve made it even better.

A Brief History of Time Lords is out now and can be purchased in physical and digital forms from any book or ebook seller.