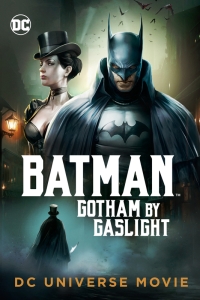 It’s been a while since I’ve seen such a remarkably well made Batman film. It’s even more impressive that said amazing film is a straight-to-DVD animated adaptation of a short Elseworlds graphic novel – a series of graphic novels from DC Comics that takes popular characters and places them in new situations/settings/etc. Batman: Gotham By Gaslight is an adaptation of the graphic novel of the same name, originally written by Brian Augustyn and featuring art from Mike Mignola, placing Bruce Wayne/Batman squarely in the late 1800s in Gotham City, where it seems that the infamous Jack the Ripper has relocated to continue his spree of terror by murdering women. Written by James Krieg and directed by Sam Liu, Batman: Gotham by Gaslight follows the Caped Crusader as he works – from the shadows – to stop Jack the Ripper’s reign of terror before it can get any worse while dodging the ever-suspicious Gotham police. If ever there were a crime from the world’s greatest detective, this would be it. (Mild spoilers follow.)

I suspect that part of the reason I love Batman: Gotham by Gaslight so much is that these DC Animated Films have truly been awful as of late. Somewhere in the early 2010s, DC decided to move away from the animation style they’d been using in their animated films and switch to a style of animation clearly inspired by that of Japanese Anime. The only problem with that is that the films weren’t animated with the kind of artistry typically found in anime. The characters lacked any kind of real facial expressions; everything looked lazy, blocky, and uninteresting; action sequences weren’t as dynamic as they should’ve been; even the backgrounds of the scenes were plain and static. Within the past couple of years, DC has slowly been moving away from that style with films like The Killing Joke and Batman and Harley, but even then, the animation in those films wasn’t quite up to snuff. Batman: Gotham by Gaslight has finally bucked that trend, though. The animation in this film feels like it would fit in perfectly with any film from the height of the DC Animated Universe (aka anything that Bruce Timm did in the 1990s and the 2000s). The backgrounds are detailed, dynamic, and well realized; each character looks distinct and has a full range of facial expressions that actually match the emotions of the script and actors; action sequences are dynamic, interesting, and well realized; and the film is actually beautiful to watch, just like the DC animated films used to be. 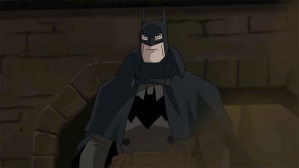 That being said, however, if the animation was the only thing that Batman: Gotham by Gaslight excelled at, I still wouldn’t be this floored by it. Not only does it feature some truly beautiful animation for a non-theatrical release, it also features a genuinely entertaining story. Every character is well written and well developed, even the secondary and tertiary characters; the mystery is extremely well paced, well developed, and genuinely surprising – though not so far out of left field that it feels disingenuous; the dialogue is witty and true to the characterizations of the characters in the film; and it’s just an all-around well-written story. It’s amazing how well Batman works when set in the late 1800s. It’s that period of time where technology is really starting to advance; you’ve got the majority of the city still operating off of old-fashioned technology while wealthy people – like Bruce Wayne – are able to start using some slightly more advanced technology. Most everyone still uses a horse and buggy, but in one scene, Batman straight up uses the 1800s version of a motorcycle and it’s crazy. The fact that Batman always has the latest technology is so much more apparent when he’s placed in an environment with such limited technology (as opposed to today where everyone has an incredible amount of technology on the person at all times). It’s just a lot of fun seeing Batman operate in this time period and even more fun seeing him go up against Jack the Ripper; a character whose ultimate identity actually surprised me. I thought I had it figured out, and then the rug was pulled from under my feet. I loved that. It’s different than it is in the original graphic novel, but it’s honestly so much more rewarding in this version.

As if that wasn’t enough, Batman: Gotham by Gaslight features a stellar cast. I don’t know why it’s taken the world this long to have Anthony Head voice Alfred, but thank God it finally happened because as soon my brain recognized that it was his voice speaking the lines that Alfred was saying, my face just immediately lit up. Anthony Head is such an underrated talent and it pleases me to see him play roles I love. The rest of the voice cast is just as good as Anthony Head, too. Bruce Greenwood is very good as Batman/Bruce Wayne. He’s able to differentiate between the two voices well enough that they sound distinct but still sound like they’re coming from the same person. He also doesn’t try to impersonate what anybody else has done, either, while also sounding how an audience member has come to expect an animated Batman to sound at this point. Jennifer Carpenter (of Dexter fame) is incredible as Selina Kyle. She brings such strength and vulnerability to the character and it’s her performance that fully rounds out the character and gives her that extra bit of dimension that makes her feel real. The rest of the cast is just as good as those I’ve listed, but to go into any real detail about many of them would range into spoiler territory, and this is a film that I would highly advise trying to avoid spoilers for.

As I’ve said repeatedly throughout this review, Batman: Gotham by Gaslight is the best Batman film in years, probably since Christopher Nolan’s Batman films. Unlike the Nolan films, however, this movie doesn’t really have anything to say about Batman as a character. It’s far more interested in just delivering a really good story about Batman doing what he does best: solving crimes and saving lives. I appreciate that the film goes this route, too. I don’t need all of my superhero movies to try and say something profound about the hero at the center of the story; sometimes I just want a good film featuring that superhero being a superhero. I don’t need their motivations or their deliberations; I just need them solving crimes and saving people and giving me a good mystery. And that’s exactly what Batman: Gotham by Gaslight does and it’s why the movie’s as good as it is. It doesn’t pretend to be anything other than a fun movie featuring Batman in the 1800s figuring out who Jack the Ripper is. And it’s glorious.