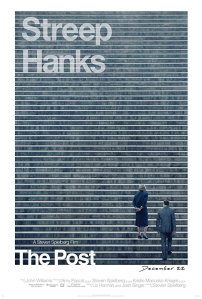 I fully understand and appreciate the message that The Post tries to communicate. In this current political climate, it’s a very important one to support: Freedom of the Press is essential to the health of any democracy. The problem with The Post, however, is that it’s too focused on being an important movie that it doesn’t actually take the time to do the story its telling justice. It spends the whole movie telling us how important the press is but never gets around to actually showing us why the press is important. Directed by Steven Spielberg and written by Liz Hannah and Josh Singer, The Post explores the cover-up, revealed by the infamous Pentagon Papers, that spanned four U.S. Presidents and pushed the country’s first female newspaper publisher Meryl Streep) and a hard-driving editor (Tom Hanks) to join an unprecedented battle between the press and the government. (Mild Spoilers follow)

I appreciate, and agree with, the message at the heart of The Post. I, too, believe that a free and independent press is essential to any good democracy. However, The Post breaks one of the fundamental rules of filmmaking: show, don’t tell. The movie is about how the Washington Post and the New York Times fought against the Nixon Administration by publishing the Top Secret Pentagon Papers – a study that detailed how the United States government had been lying about the Vietnam War for decades. But really, the film is barely about that. There are about two scenes which actually show reporters doing any kind of reporting on the story. Most of the film deals with the risks that Washington Post publisher, Kay Graham (Streep), undergoes as her paper sets out to pick up where the New York Times was forced to leave off with the publication of the Pentagon Papers. We’re told over and over how important the publication of these Papers are and, as an audience watching a film based on real events from over forty years ago, we know that it really was important that these Papers be published, but the film itself never actually shows or tells us why it’s important. The closest it comes to doing this is making the argument that lying is wrong. Well, no duh. The film tells us that there will be all these negative repercussions for the country at large if the Pentagon Papers are published but then goes into no detail about what those repercussions might be. We’re told a lot of things, but shown or explained nearly none of it. It’s hard to buy into the stakes when you’re not actually shown what those stakes are.

The majority of the film is spent simply telling the audience that the press is a good thing. We’re never really shown how the publication of the Pentagon Papers prooves that the press is good. We don’t see how the publication benefits the country in the context of the film (yes, we as an audience have the background knowledge of knowing how the real Pentagon Papers really impacted the country, but the film can’t just rely on us already knowing that information). The pacing of the movie feels off, especially in the beginning. It takes a long time for the story to actually get going. It’s like the first fifteen minutes actually tries to be a movie about reporters breaking a story, but then it decides after that that it wants to be about the business side of the press while also trying to celebrate the press as a whole and being a film about female empowerment. It spreads itself too thin with too many themes that never coalesce into anything other than the writers telling you that these ideas are important and never actually showing you why they’re important.

The film spends very little time giving any of the characters an actual arc. The closest the film comes to having a character arc is Meryl Stree’s Kay Graham, but even then, her character arc is merely her finally standing up for herself. Which is interesting, but feels out of place in a film that seems to be about how great the press is, yet focuses on the actions of its publisher instead of the actions of those actually breaking the “important” story. The other real main character is Ben Bradlee (Hanks), the Washington Post’s editor. His character has no real arc. He starts the film wanting to break some kind of major story and ends the film having broken a major story. The closest thing he has to a character arc is his gradual realization of the risks that Kay Graham is taking by agreeing to publish the papers. But, in the context of the importance of the Pentagon Papers, her risk doesn’t feel all that monumental. The film asks me to sympathize with these people who are arguing over whether they should publish the Pentagon Papers – a study which the film goes to great lengths to continuously tell me is of monumental importance to the American public, but never actually bothers to tell me why that’s the case. 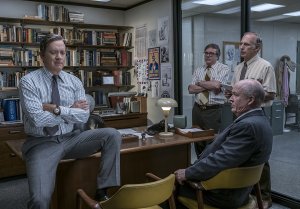 Compare The Post to another recent film about the importance of the press and the good they can do by breaking a monumentally important story, Spotlight. In Spotlight, we actually see how the reporters of the Boston Globe broke the story of molestation in the Catholic Church. We’re shown the impact that story has on the people involved in the story, both good and bad. We’re shown how the reporters go about doing their jobs and ensuring they get the story right. We’re shown the danger the paper is put in by running the story. Contrast that with The Post, a film that has about two scenes dedicated to reporters doing any kind of reporting, and doesn’t actually show its audience why the story is important or how the people – and the paper – involved will be impacted by its publication. The Post merely tells while Spotlight actually shows. 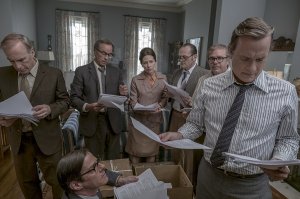 It’s with this that The Post really fails. It spends the whole film telling the audience things matter without actually showing how they matter. It’s a fairly well-directed movie with a lot of pretty good performances – though none of these actors deliver anything close to the best performances of their career, chiefly due to the mediocre script they were given to work with. The Post fails because it spends all its time trying to convince us that it’s an important movie without actually doing the legwork of telling a well-written story. It tries to tell us all the things it’s about, but then doesn’t seem to have anything to actually say about its themes. It wants to praise the press without showing how the press works. It wants to empower women without actually giving the audience a female character that struggles much. We’re told how hard it is for her, but we’re never really shown how she struggles, outside of one scene about two-thirds into the film. It’s a film that thinks it’s so important but then fails to deliver a story that proves its importance. The Post completely lets down the story it’s trying to tell by not actually focusing on the story itself, but on the importance of the film as a whole. It’s unfortunate because this really could’ve been another film that showed how the press is good for this country. Instead, it just falls flat.