I love a good time travel based show – I mean, I’m in an eternal love affair with Doctor Who for Pete’s sake – and Timeless is a pretty good time travel show. It has its ups and downs, for sure, but at the end of the day, it’s a pretty enjoyable show. From Eric Kripke (“Revolution,” “Supernatural”) and Shawn Ryan (“The Shield”), Season 2 of this thrilling action-adventure series will pick up right where we left off with our heroes in the explosive Season 1 finale. We continue to race throughout history with our beloved team: Rufus (Malcolm Barrett), a scientist; Wyatt (Matt Lanter), a soldier; and Lucy (Abigail Spencer), a history professor, in an attempt to prevent the destruction of our world as we all know it.  This season they’ll find an unlikely ally in their quest to ruin Rittenhouse, a deadly organization with plans to change history and reshape reality — even though Lucy’s family has been a part of Rittenhouse for centuries.  Still making every effort not to affect the past themselves, they will visit 1692, 1917, 1941, 1981 and more.  We’ll be introduced to the likes of Marie Curie, Hedy Lamarr, William Randolph Hearst and a multitude of other influential people throughout history. (This review will contain spoilers for all of season 1 and the first episode of season 2)

Saying that this season of Timeless picks up directly where the first season ends is a bit of a lie. Almost immediately, there’s a time jump to several weeks in the future. To be fair, this works quite well as we’re thrust right back into the action without spending ages on establishing what’s going on. This has its pros and its cons. It is great to go ahead and be back in the action as quickly as possible, but it does rob the story of some interesting narrative threads as the audience doesn’t get to see any of Rufus, Wyatt, Jiya (Claudia Doumit), Agent Christopher (Sakina Jaffrey), and Connor Mason’s (Paterson Joseph) adjustment to life inside their bunker. Perhaps at some point, it might be explored a bit. In the context of the season as a whole, it would’ve been boring seeing them stuck in the bunker with no access to time travel. On the flip side, it would have been interesting seeing Lucy, Emma – a member of Rittenhouse and pilot of the Mother Ship (Annie Wersching), and Carol Preston – a high ranking member of Rittenhouse and Lucy’s mother (Susanna Thompson) gallivanting through time in the Mother Ship those first few weeks. 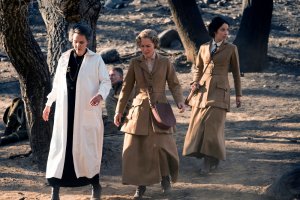 This show suffers from the same problems that The X-Files suffered from in its glory-days: it doesn’t seem to know what it wants to do with its overarching mythology. Often, the standalone adventures throughout time are very fun, but then when they try to tie in and further develop the ongoing storyline (with Flynn in season 1 and with Rittenhouse in season 2), it all becomes a bit messy. This problem became utterly apparent as the first season reached its conclusion. It’s like the creators assumed the show was going to be canceled (which almost turned out to be a correct assumption) and tried to make the season 1 finale into a series finale cramming poorly thought out resolutions to dangling plot threads, none of which felt satisfying as they didn’t have the requisite buildup to truly work, but then got cold feet at the last second and crammed that cliffhanger onto the end of the episode in order to give the second season somewhere to go. As a result, this episode, The War to End All Wars, suffers because it has to somehow make sense of all of those “resolutions”: the way Rittenhouse was “dealt with” was utterly unsatisfying in the season 1 finale and now with season 2, they’re trying to keep Rittenhouse around by saying there are sleeper agents throughout history and that – actually – you could’ve spotted them throughout season 1, too, doesn’t quite work as well as it should because of that; none of the characterizations quite work because of the speed the previous episode dashed through those various character developments, and really everything is a bit messy. The episode is, however, about as good as you could expect it to be, given all that it had to deal with.

Things get a lot better once the Time Team is reunited about midway through the episode. When that happens, it feels like nothing has changed and it’s the same old gang on their missions to save time. That’s nice. And the cliffhanger at the end of the episode teases a team up that should nicely set up the season for the Time Team to fight their new enemy, Rittenhouse, with the help of an unexpected (but totally expected) ally. There are far more good elements in this episode than there are bad, and once you get used to things, it’s very enjoyable. It’s just that the first ten minutes, or so, really has to make sense of the season 1 finale and it fails to do that particularly well. But, then again, was there really any possible way to do that well? I’d say that it did the best it could, given what it had to deal with. I give Arika Lisanne Mittman and Tom Smuts credit for the fact that the episode, at the end of the day, is still good. It’s messy at the beginning but gets a lot better as it goes on. Even by the end, it seems like the season has a vision for where it wants to go: the Time Team has to try and stop Rittenhouse from activating all its sleeper agents scattered throughout history. Yes, this gameplan doesn’t quite work as well as it could have had the show been able to properly build up to it, but it’s still a good gameplan for the season and it does make me want to keep watching. 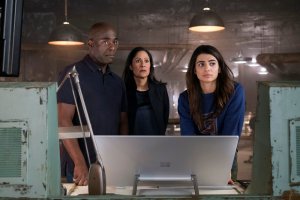 At the end of the day, the fun of this show isn’t really whatever nonsense is going on with the secret organization that wants to be the New World Order, or whatever Rittenhouse actually is (since it doesn’t seem like the show really knows at this point). What makes this show fun is how the characters interact with each other and how they interact with the historical events they’re witnessing. This episode features some great interactions between characters and some nice character development. It’s a bit light on interesting historical interactions, but future episodes appear to promise more of those. The War to End All Wars did what it needed to do: it tried to make sense out of the finale and set the show on a path moving forward. It retained the best of season 1 while setting up new elements for season 2. It’s looking like Timeless will continue to be enjoyable.

All photos courtesy of NBCUniversal.