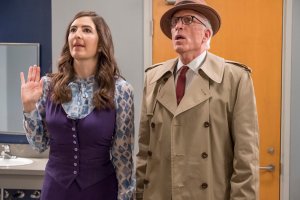 After last week’s excellent cliffhanger featuring the return of everyone’s favorite demon, Trevor (Adam Scott), I was really excited to see just what would happen next and how it would live up to the season premiere. As expected, The Brainy Bunch continues to push this season into new, exciting, and hilarious situations. Plus, it’s always fun to get to see Adam Scott interact with this cast again.

Episode 303: The Brainy Bunch (Written by Dan Schofield and Directed by Jude Weng)
After Trevor (Adam Scott), a demon sent by Shawn to infiltrate and break up Chidi’s new study group in order to ensure their return to the Bad Place, joins the study group, Michael (Ted Danson) and Janet (D’Arcy Carden) must figure out a way to get him to leave before he can tear the group apart and ruin the experiment.

It’s an utter delight to see Adam Scott back on The Good Place. When it was announced that his show Ghosted was canceled by FOX, I hoped that it would result in a new appearance from his character, Trevor, somewhere in season 3 of The Good Place. I just didn’t expect it to happen so soon or in this way! But, man, what an appearance! Trevor is so likably evil in this episode! Sure, he puts on a front when with the gang since, of course, they don’t know he’s a demon, but when he interacts with Michael and Janet, and his true colors come out, it’s just a joy to behold. But that’s not to say that he’s not still evil when he’s with our humans. He’s just a bit more subtle about it. I mean, he keeps referencing memes that are years old, you can’t get much more evil than that! It’s a bit sad that Trevor is pretty much sent away at the end of the episode (in a beautifully hilarious way by the Judge (Maya Rudolph)), but I still hold onto hope that he can return again, maybe if/when our characters end up in the afterlife again. 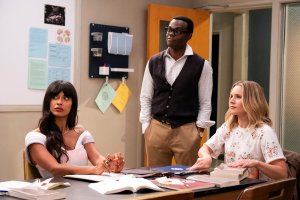 It was also a lot of fun getting to see Janet on Earth for the first time. Like Michael, she has no access to any of her powers on Earth and is having a really hard time dealing with that. She poses as a waitress in a terrible cowboy-themed restaurant and has a lot of trouble coping with the fact that she can’t just magically summon things on Earth like she could in the Bad Place. She and Michael have returned to Earth (to the suspicion of Mike O’Malley’s Doorman) in order to try and get rid of Trevor before he can tear the group apart and ruin everything. Naturally, nothing they do seems to have any impact on Trevor and he almost succeeds in destroying the group by making Chidi feel like he might be crossing an ethical line by being friends with the people he’s supposed to be studying for his thesis project. I just really enjoy seeing Michael and Janet on Earth. I’m really glad they’ve been ignoring the Judge’s rules and are still getting to interact with our core four humans because they also make up the lifeblood of the show, just like the interactions between Eleanor (Kristen Bell), Chidi (William Jackson Harper), Tahani (Jameela Jamil), and Jason (Manny Jacinto) do. 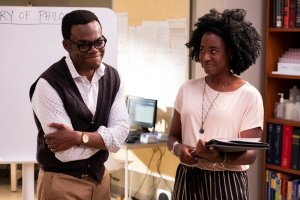 I continue to really appreciate the addition of Simone (Kirby Howell-Baptiste), a professor of neuroscience at the university Chidi teaches at and his partner with the thesis study, to the show. She fits in so well with the group that it honestly feels like she’s been there since day 1. Her and Chidi complement each other in really nice ways and she, again, ends up being a catalyst that leads to the group staying together as she reassures Chidi that he isn’t overstepping any ethical lines by being friends with the group and that she’ll let him know if she does. Chidi and Simone work well off of each other and Kirby Howell-Baptiste continues to give a really good, really funny performance as Simone. The rest of the cast continues to be superb as well, though Chidi, Simone, Michael, Janet, and Trevor sort of steal the show in this episode. As always, though, everyone gets a chance to shine and there’s just some great acting in this episode from everyone. 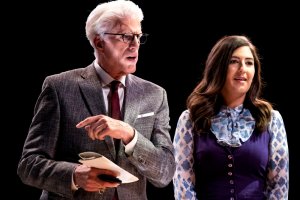 My favorite scene, though, comes towards the end of the episode. It’s when the Judge summons Michael, Janet, and Trevor back to the hallway where the door to Earth is. She’s discovered that the three of them have been going to Earth and interfering with the lives of the humans (causing a whole lot of side effects including Brexit, The Greatest Showman being a successful movie, and the Jacksonville Jaguars actually doing well) and is pretty pissed about it. Trevor tries to backtalk her, but she literally just throws him off into the void, seemingly ridding us of him for a while. She wants to send Michael and Janet back to the Bad Place and end the experiment, but Janet’s powers have suddenly started working and everything she tried to summon while on Earth starts appearing on the platform between her and Michael and the Judge, giving the two of them the chance to escape the Judge. The Doorman gives Michael the only existing key to the doorway to Earth and Michael and Janet return to Earth to make sure the experiment works out. It’s a really nice moment of world building and a great way to raise the stakes for this season even higher than they previously were. Plus, Maya Rudolph is just a lot of fun as the Judge and I will be happy to see her as often as possible. It’s a shame that this might be the last time we see the Doorman for a while, though. His time was short but his impact was great. 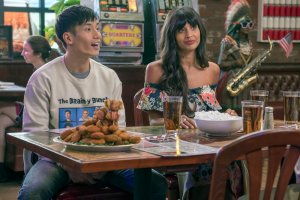 All in all, The Brainy Bunch was another great episode of The Good Place. It featured the return of a fan-favorite character, a lot of great emotional beats, some really funny jokes, and a continued evolution and heightening of the plot of the series. I enjoyed this episode just as much as, if not more than, I enjoyed the first episode. It’s a lot of fun and continues to show that The Good Place is still the best comedy currently airing on TV. It features great writing, great jokes, and some great acting and is just so much fun. Check this show out if you’re not already watching it!