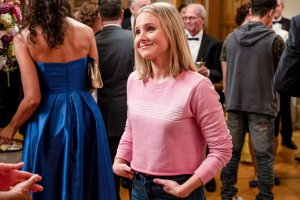 I really love how the writers of The Good Place don’t dawdle with this series. They never drag their feet when it comes to moving the story along. Last season featured Michael rebooting the neighborhood over 800 times in a single episode. Tonight’s episode featured a similar thing as more than a year passes within a single 22-minute episode, rapidly advancing the plotline of the season while also showing the continuing evolution of our favorite awful humans.

Episode 304: The Snowplow (Written by Joe Mande and Directed by Beth McCarthy Miller)
After the shocking events of last week’s episode, Michael and Janet are, essentially, trapped on Earth as they continue to supervise Eleanor (Kristen Bell), Chidi (William Jackson Harper), Tahani (Jameela Jamil), and Jason (Manny Jacinto) as the four of them continue to try and improve upon themselves. As a year goes by, Chidi’s thesis project comes to a close and Tahani gets engaged to Larry Hemsworth, Michael and Janet start to fear that all their work has come to naught and frantically try to keep the group from going their separate ways. 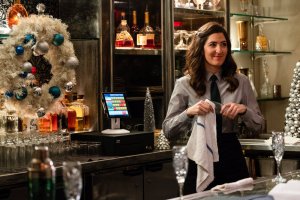 This episode has the least amount of scenes dedicated to expanding the world of the afterlife out of all of the episodes that have aired so far, but that’s honestly okay. We had a lot of world-building in the first two episodes, and with Michael and Janet now on Earth, we still keep them around and it works out okay. Plus, we get a really nice scene right at the start of the episode with the Judge (Maya Rudolph) giving Michael and Janet a really strong fussing at in regards to the stunt they pulled at the end of the previous episode. Essentially, if they ever come back to the afterlife, they’ll be retired – something that’s very bad news indeed. Like I’ve repeatedly said, I enjoy every single second that features Maya Rudolph as the Judge and I’m glad she keeps appearing in this season. But, once that scene ends, all of our action remains on Earth (up until that brilliant cliffhanger, of course. But more on that later…).

I really appreciate that the writers decided to have some time jumps in this episode and move things along at a break-neck pace. We don’t really need to see Eleanor, Chidi, Tahani, and Jason learn how to be good people again; we’ve already seen that in seasons 1 and 2, so it’s good that we’re mostly glossing over that here. What I do enjoy are all of the great character moments. After our first time jump (three months), Eleanor tells Chidi that she didn’t plan on staying in Australia so long and, as a result, is broke. Michael and Janet decide to get Eleanor a winning lottery ticket (because Janet was able to see which number would be a winning number before they left the afterlife and lost access to their powers), leading to Eleanor being able to stay and a really funny quip from Tahani where she remarks that the amount of money Eleanor won doesn’t seem all that much. Three more months pass and we find out that Tahani is really itching to sleep with someone and has started flirting pretty hardcore with Jason. Michael fears that Tahani sleeping with Jason will lead to the group breaking up, so he sets in motion a series of events that begin with Tahani meeting an old ex-boyfriend of hers in a bar, Larry Hemsworth (an unknown brother to Chris and Liam). Six more months pass and we learn that Tahani and Larry have gotten engaged and are planning to move to London, leading Chidi to realize that he should probably end the group so he and Simone (Kirby Howell-Baptiste) can analyze the data they’ve gathered and repeat the experiment with some new people. 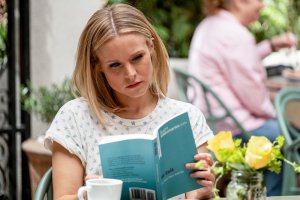 All of that happens within the first half of the episode, or so, leaving the rest of the episode plenty of room for even more to happen. Tahani invites the group to her engagement party (inside her Heir-Bnb). Michael and Janet infiltrate the party and pose as caterers in order to try and keep the group together. After Tahani presents the group with a giant cake with all of their faces on it (as thanks for the group existing and bringing her to Australia so she could reconnect with Larry), Eleanor is invited to give a small speech which leads to her freaking out and lashing out at the group. A bit later, Simone finds Eleanor outside and helps her understand why she lashes out like this. It’s a really great moment between the two of them and I really appreciate how Simone has sort of become the glue that holds the group together here on Earth. She and Eleanor have a nice moment of connection before Eleanor goes back in and apologize to the group. As she apologizes, the four of them agree to meet up annually for a group reunion so that they never grow apart from each other. Meanwhile, Michael decides that he’s going to back to the afterlife, break into the Judge’s chambers, and reset the timeline so that he and Janet can get it right this time. As he opens the door, Eleanor, Chidi, Tahani, and Jason walk in on them, seeing the magical door and reacting about as you’d expect. And the episode ends. It’s a pretty great cliffhanger to a pretty great episode. 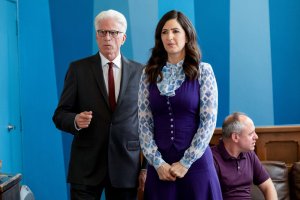 There’s so much about this episode that I really enjoy. I enjoy that the writers are really barreling through the story and not dragging their feet with anything. I mean, we’re finishing the third episode and the humans have now witnessed the magical door and it would seem that the jig is up (though, somehow, I doubt that things will play out that way in the next episode). I appreciate the various moments that each character got to shine in this episode. The nice thing about this season so far is that it’s really given us a chance to see how these characters have grown and evolved. They seem so different from who they were back in season 1 and it’s really nice to watch them continue to grow in new and exciting ways. I adore Michael and Janet in this episode; I like how they’re still essentially doing the same thing they were doing in the first two episodes here, but only they’re stuck on Earth. I love how Janet tries to get through to Michael to get him to let the humans try and succeed on their own and I love that he just doesn’t get it. It helps to really emphasize just how much every character has riding on this whole thing working out. The Snowplow is another great episode in a great season of The Good Place. It succeeds in every way and pushes the story forward in ways that are genuinely surprising. I expected the humans to find out that something weird was happening eventually, but I didn’t expect it to be like this or to happen so soon. This cliffhanger is probably my favorite one so far this season. It’s really left me desperately wanting the next episode to come out right now. Season 3 of The Good Place continues to be even better than the previous seasons and I really don’t understand how it’s possible to be better than amazing, but they’re pulling it off! I’m excited to see what comes next.