Episode 307: The Worst Possible Use of Free Will (written by Cord Jefferson and directed by Claire Scanlon)
Eleanor (Kristen Bell) recalls some forgotten events from her past.

Episode 308: Don’t Let the Good Life Pass You By (written by Andrew Law and directed by Dean Holland)
Michael (Ted Danson) and Janet (D’Arcy Carden) take an important journey. Eleanor ponders whether she should share a secret.

The Worst Possible Use of Free Will picks up pretty much where A Fractured Inheritance ended, with Michael having told Eleanor about her telling Chidi (William Jackson Harper) she loved him in one of the reboots. Michael takes Eleanor to a library where he shows her a machine that he can use to implant the memories of the previous reboots in the afterlife back into Eleanor’s head. There are some pretty funny gags with that, but the bulk of the episode is spent with Michael showing Eleanor the events of the particular reboot in which she told Chidi she loved him. We saw tiny bits of this reboot back in season 2, but it’s a lot of fun to get to see another reboot in a bit more detail and I’m so glad we got to take a trip back to the Bad Place neighborhood from the first two seasons. The episode does a lot in terms of inching the overarching plot of the season along. At first, it feels almost like one of those clip shows that sitcoms are known for doing, but it quickly becomes apparent that these “clips” are things we haven’t seen and they’re only being shown to further Eleanor’s character arc and get her closer to accepting who she is and that she can love. And that acceptance helps propel us into episode 8. Well, that and a pretty awesome cliffhanger that sees Shawn (Marc Evan Jackson) leading a group of demons through a secret door they constructed to take them to earth.

Don’t Let the Good Life Pass You By starts with Michael and Janet visiting the one and only Doug Forcett (Michael McKean) because Michael thinks that he is the model “good person” that he can use to create a blueprint on how to earn enough points to get into the Good Place. Meanwhile, the gang of humans is at a lodge near Doug’s house where Eleanor struggles with whether or not to tell Chidi about her feelings toward him when Shawn and the demons barge in and try to capture them. After a long time spent with Doug, Michael and Janet come to the conclusion that he isn’t the blueprint they’re looking for and they walk into the lodge just as Shawn and the demons have captured the humans. A really cool fight breaks out between the demons and Janet – where Eleanor confesses her feelings to Chidi -, ultimately ending with Michael and Janet capturing Shawn and sending the other demons back to the afterlife. The gang all interrogate Shawn, but after getting very few answers, Michael and Janet send him back to the afterlife, too. Michael tells the gang that he’s come to the realization that there’s a fundamental problem with how the system tallies the points and decides that he needs to get some evidence on the accountants who are in charge of the point system. It’s at that moment that more demons appear, and the episode ends as Janet decides to take Michael and the humans into her void – an act which will end the humans’ new attempt at life and leave Earth behind.

The Worst Possible Use of Free Will finally gave me that fix of weird afterlife fantastical elements that I’d been craving the last few weeks. I didn’t quite realize how much I missed the neighborhood – and the wacky hijinx that often transpired there – until we got to revisit it in the flashbacks in this episode. Not much actually happens in this episode, but it’s still a lot of fun as we get to see a previously unseen event from one of the reboots and we get to finally have one of our four humans possess some of their memories from the reboots/the afterlife and see how those experiences combined with their current experiences have made them develop. Then it was a whole lot of fun to finally get to meet Doug Forcett and see the man behind the legend. It was a fun twist to have him so pathetic and unhappy. His vision of the afterlife that he had during that one crazy drugged-up night has led him to devote his life to earning enough points to get into the Good Place, but it’s also caused him to be deeply unhappy. He always focuses on others’ happiness to the point that he lets himself get taken advantage of and mistreated. It’s seeing Doug in this state that makes Michael finally realize how flawed the points system is and it’s a really fun way to propel our characters back to the afterlife so they can try and make some changes to the system. 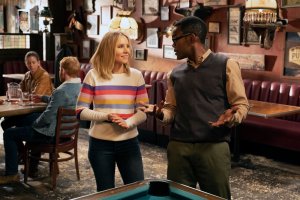 This turn of events is one I hoped the show would make by the end of this season. While it was a fun idea to give Eleanor, Chidi, Tahani (Jameela Jamil), and Jason (Manny Jacinto) another shot at life and another chance to earn their way to the Good Place, that idea had totally run its course by this point. The first few episodes of the season with this premise were fun, but once Michael had revealed the truth to the gang and they’d all decided to focus on saving other people, the show felt like it had stalled a bit. As I said in my previous review, I’m not invested in the fates of all these side characters; I’m interested in the fates of Eleanor, Chidi, Tahani, Jason, Michael, and Janet, and with there being no hope for them to earn points to get into the Good Place anymore, the show had to find another way to get them back to the afterlife and regain that important fantastical element of the show. A huge part of the appeal of the show was all the stuff related to the afterlife and the Good Place and the Bad Place and the Medium Place and the points system and all of that, so to have the show so separated from that important part of its foundation was a bit sad and boring, but these latest two episodes have really brought everything back to that foundation and it gives me a lot of hope and excitement for future episodes. 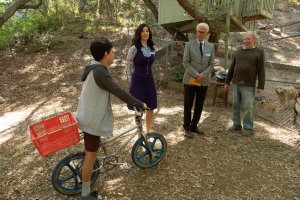 All in all, The Worst Possible Use of Free Will and Don’t Let the Good Life Pass You By are great episodes of The Good Place. They’ve managed to reinvigorate my love of the show after some previous episodes had grated on me a bit. There are some great character development and some really good worldbuilding and a cliffhanger that seems to suggest we’ll be back in the afterlife (and away from Earth again) very, very soon. I’m glad to see that the overarching plotline seems to be moving forward again and I liked a lot of the developments that were revealed throughout these two episodes. Eleanor got to have some real growth in these two episodes, and it’s always nice to see her get to really grow and evolve as a person, especially after spending some time with Jason and Tahani in previous episodes. I’m really excited to see how the gang tackles the accountants and Janet’s void and Shawn and the other demons and the Judge in future episodes. I’m just so glad that The Good Place seems to be taking us back to the afterlife and diving back into that mythology. I missed it a lot. It’s just not The Good Place without all that cool afterlife mythology and the wacky, fantastical hijinx that accompany it. So bring on the new adventures in the afterlife!