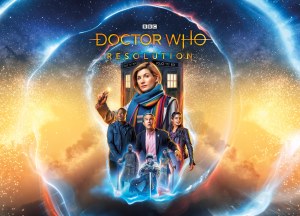 Well, that episode should’ve been the real series 11 finale of Doctor Who. Resolution is exactly the kind of exciting, explosive story that you’d want to end a series of Doctor Who with, so at least we got it a mere three weeks after the series technically ended. In possibly the worst kept secret of Chibnall’s era so far, Resolution featured the return of the Daleks (or, to be completely honest, a Dalek) and what a return it was! (This review will feature spoilers)

Episode 1111: Resolution (written by Chris Chibnall, directed by Wayne Yip)
As the new year begins, a terrifying evil from across the centuries of Earth’s history is stirring. As the Doctor (Jodie Whittaker), Ryan (Tosin Cole), Graham (Bradley Walsh) and Yaz (Mandip Gill) return home, will they be able to overcome the threat to planet Earth? 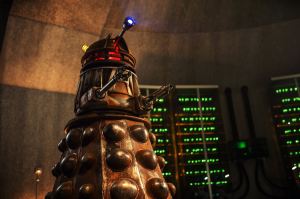 I love the Daleks. Unabashedly. Yes, they can be a little wonky sometimes and they’re not always as threatening as they want to be, but they’re just so much fun to encounter, especially when they’re done correctly. Thankfully, Chris Chibnall writes the Daleks better than he’s written any of the other monsters he created this season. Here, he takes a single Dalek and makes it desperate and threatening. It’s a mixture of new elements and old. He creates a new caste of Daleks (recon scouts) in order to allow the Dalek to have abilities it normally wouldn’t have (the ability to stop the TARDIS from tracking it, primarily), but it feels like a natural evolution of the Daleks and Chibnall’s creation of a new caste of Dalek is a clever way of letting this new Dalek have those powers without having to retcon a reason for the other Daleks not having them. Nick Briggs is back again as the voice of the Dalek and it’s always a joy hearing him yelling “Exterminate!” at someone. For the first half of the episode, it honestly sounded like they’d gotten a new guy to voice the Dalek because it didn’t sound anything like a normal Dalek voice, but it all came together in the end in a way that was surprising and enjoyable. The same rings true for its slight redesign. The Dalek starts the episode off as the mutated squid creature it is outside of its casing. The design of the squid has been tweaked a bit to look almost Lovecraftian, and it’s rad, and then the Dalek is able to rebuild a casing for itself, which allows for the classic design to be tweaked slightly. It very much looks like what you’d expect a Dalek to look like, just tweaked a bit. It totally works and it totally looks menacing. 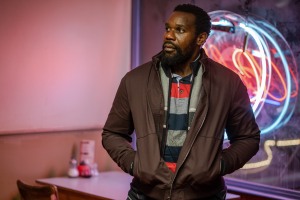 As for the plot of the episode, it, too, is fairly well executed. Like most of Chibnall’s episodes, it’s a fairly simple plot. A Dalek came to earth in the ninth century and was defeated by a coalition of various humans. Its body was split up and buried in different locations. In the present day, an archeological dig led by Lin (Charlotte Ritchie) and Mitch (Nikesh Patel) uncovers one of those parts and they accidentally bring the creature back to life. It takes control of Lin and sets about recreating itself. Meanwhile, the Doctor and her friends are hot on the Dalek’s trail, but Ryan’s father, Aaron (Daniel Adegboyega), arrives, wanting to make amends with Ryan for his absence in Ryan’s life. Ryan is, understandably, apprehensive about allowing Aaron back into his life, but as the episode goes on, the two of them start seeing more eye-to-eye and the whole plotline with those two is a nice way to cap off the rest of Ryan’s emotional arc for the season. As he and Graham have finally figured out how to live with each other and love each other, it felt only appropriate to have Ryan and Aaron come to some kind of peace, too. Adegboyega is fantastic as Ryan’s dad; you can absolutely see and believe the similarity between the two and Adegboyega plays Aaron with this lovely bit of guilt and understanding of the pain he’s caused Ryan. It felt very real and I liked that a lot.

The Dalek’s endgame is to get to a communications center where it can send a signal to the rest of the Dalek fleet, announcing that Earth is ready for conquest. Naturally, the Doctor can’t allow that to happen. The gang finally tracks the Dalek down to a communications center and we get our first look at Jodie Whittaker’s “Angry Doctor”. It’s unfortunate that it’s taken us this long to get this kind of anger from Jodie’s Doctor, but that boils down to the fact that most of the threats from this season weren’t particularly threatening rather than it being a defect in Jodie’s acting. Regardless, it’s nice to see her Doctor having to face a threat as dangerous as a Dalek. It’s nice to see how she handles it and it makes for an entertaining hour of TV. Ultimately, the Dalek takes control of Aaron to try and force the Doctor to take it to the Dalek fleet, but in a move befitting an angry Dalek, she tricks it into being launched into a sun going supernova. It’s suitably dark for this villain, and the scene leading up to it where Ryan has to keep his father from falling out into space with the Dalek is tense and really gives Tosin Cole a moment to shine as he decides that he does want his dad around. It’s a good resolution to the episode that doesn’t feel too much like a cheat. 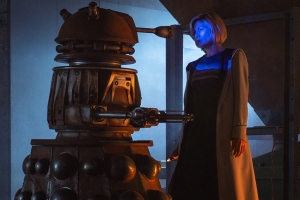 All in all, Resolution is a pretty good Doctor Who special. It’s a great way for this series of Doctor Who to really end, as this episode feels a bit more like a series finale than the one we actually got. It’s probably Chibnall’s strongest episode from a writing standpoint. I wish every episode of Doctor Who ran for closer to 60 minutes than the 45-50 they’re normally running. Those extra ten minutes give the episode a bit of much-needed breathing room that can be used to better develop the threats of each episode. As this one had that extra time, the Dalek felt well developed. We had plenty of time to learn what it wanted and why it wanted it and it got some time to really build itself into a threat, which was nice. There was also plenty of time for the episode to build to a proper climax and actually have a nice resolution that ties everything together. If I had a complaint about the writing, it’s that Chibnall is such a tease. He has the Doctor try to contact UNIT, only to have the organization currently not exit due to financing. At that point, it seemed like they might reintroduce Torchwood, but the Doctor just says they’re alone and moves on. The moment was perfect to reintroduce one of those organizations and it’s kind of a shame they didn’t do that, especially with a threat as deadly as a Dalek, but maybe they’re saving it for later. The directing, acting, and music were all just as good as you’d expect from this era of the show. The way it ends does leave me excited to see where things can go from here. A lot of the emotional drama between Graham and Ryan has now been resolved, so I’ll be interested to get some nice adventures between all of them. Hopefully, the crew can learn from the successes and failures of series 11 and write more episodes like Resolution and less like The Tsuranga Conundrum.