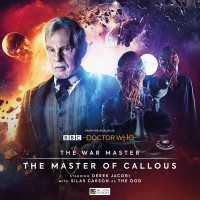 The War Master: The Master of Callous is one of my least favorite box sets from Big Finish Productions. It’s a shame, too, as I really love Derek Jacobi as the Master and I enjoy stories that focus on the Master doing dastardly things. I enjoyed the first War Master box set, Only the Good, quite a bit, mostly because it felt like the writers had something to say about the War Master and had something for him to do. That box set went a long way towards tying the Master from the classic series (and Eighth Doctor audios) and the Master from the revived TV series together. This box set, on the other hand, features none of that interesting writing. Here, it doesn’t feel like the writers had anything new to say about the character, nor did it feel as though the character actually had anything to do. In fact, he’s barely in two of the four stories! Needless to say, I’m not a fan of this box set. (NOTE: There will be spoilers ahead.)

(Written by James Goss and Guy Adams)
On the mining colony Callous, Elliot King struggles to meet the demands of its governor, Teremon. The odds are stacked against him, and his options are running low. The world that once promised dreams now offers only despair. A wild Ood stalks the forests, carrying an antiquated phone. The caller promises much – he claims he can change the world – but he always speaks a devastating truth. He is the Master and the Ood will obey him… but to what end?

The Master of Callous is, essentially, one four-hour long story split into four hour-long episodes at seemingly obligatory points. I’m not inherently against the idea of these box sets telling one long, continuous story (instead of the usual four, somewhat connected but often stand-alone stories usually found), but the problem here is that there isn’t actually enough story to warrant it being four hours long. At best, there’s enough story for one really good hour-long episode. This box set is really the perfect example of Big Finish trying to stretch an idea based around the revived TV series into as long of a story as they possibly can. There is literally no reason for this particular story to be four hours long. Two of those hours barely feature the Master at all; he briefly appears at the end of episode 1, he’s in episode two, Derek Jacobi voices a version of the Master that’s only in the mind of a character suffering from delusions – so that doesn’t really count, and then he’s in the final episode where he finally actually does something kind of Master-y.

So what we’re left with is a story about a bunch of side characters that we never really care about. This kind of story could have worked if it was about one of the incarnations of the Doctor. However, it’s not. This is a story about the Master – and not just any incarnation of the Master, but the one who was around during the Time War. The most dangerous incarnation of the Master. And, yet, he doesn’t do anything particularly evil until the last twenty minutes or so of the entire box set. Sure, he’s behind the scenes pulling the strings some, but he’s given so little to work with most of the time that his character disappears behind all these side characters that the writers want us to care about but never really endear them to us. Pretty much everyone in the story is unlikable and hard to sympathize with. They’re all acting out of selfish greed, for the most part. Again, this could be interesting if the Master was given a real chance to act like himself opposite them instead of being in disguise the entire time. As such, we’re given a four-hour story about the Master that barely features the Master. That’s not really what I want from a box set about the Master. I’m not here for a story about a bunch of other people; I want to see the Master being evil and doing what he does best.

Aside from the severe underuse of the Master, the writing, in general, is rough. Like I previously said, there’s really not enough story here to justify this set being one, long, continuous four-hour story. The first episode spends an hour and fifteen minutes introducing a character just to kill him off so we can be introduced to his daughter, who is even less likable than he is. The plot doesn’t actually get rolling until the end of the second episode, and then it’s immediately ground to a halt for the entirety of the third episode as we spend a bunch of time with one of the side characters going crazy in isolation (as a side-effect of the thing they’ve been mining this whole time; don’t ask, it doesn’t really matter). The final episode is easily the best one, but that’s because the plot actually gets moving and the Master gets to do some evil stuff and we find out what all of this was actually for (spoiler alert: he’s trying to mine this substance because it’s needed for the construction of battle TARDISes. He intends to sell this substance to Narvin for a hefty sum of money and a chameleon arch (which places the events of this box set before the events of the previous one). The sad thing is, this premise isn’t actually a bad idea for a story about the War Master. It seems absolutely plausible that he’d do all of this and then sacrifice all the people he took advantage of. The problem is that this idea is not one that supports four hour-long episodes. It’s a good storyline for a single, hour-long story. Instead, it’s stretched out for four hours.

The Master of Callous is long, drawn out, and boring for much of its runtime. Frankly, it’s a four-hour long story that has no business being any longer than about an hour. The plotting is meandering, frustrating, poorly paced, and focuses on a cavalcade of side characters the listener cares little about instead of focusing on the title character of the set. Derek Jacobi is as good as always in the role, but he’s given very little to do until the final episode. The rest of the guest cast do a suitable job; their performances suffer because their characters are written so unsympathetically that no actor could really shine performing these words. I really wanted to like this box set; I enjoyed the first one quite a bit and I really like stories about the Time War and I love the War Master. This box set, however, is just a mess. It’s one of my least favorite Big Finish box sets that I’ve listened to. The entire four-episodes of this set should have just been one really good episode alongside three other really good episodes telling different stories. But, alas, that’s not what Big Finish did.