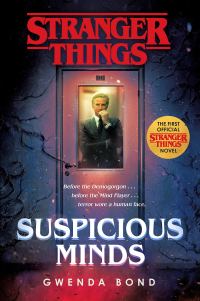 My biggest problem with Stranger Things is that there’s too much pre-teen drama and not enough spooky stuff/weird government conspiracy stuff. I find myself far more interested in what’s going on in Hawkins Lab than I am in what Dustin, Mike, Will, and Luke are up to. So, getting through the show is always a bit of an ordeal for me as I just want the weird, spooky stuff. So, when Suspicious Minds was announced as the first official Stranger Things tie-in novel, I was pretty excited. It sounded like I’d finally be getting my wish. I’m happy to report that this novel is full of weird, creepy government stuff and I adored every page of it.

A mysterious lab. A sinister scientist. A secret history. If you think you know the truth behind Eleven’s mother, prepare to have your mind turned Upside Down in this thrilling prequel to the hit show Stranger Things.

It’s the summer of 1969, and the shock of conflict reverberates through the youth of America, both at home and abroad. As a student at a quiet college campus in the heartland of Indiana, Terry Ives couldn’t be farther from the front lines of Vietnam or the incendiary protests in Washington.

But the world is changing, and Terry isn’t content to watch from the sidelines. When word gets around about an important government experiment in the small town of Hawkins, she signs on as a test subject for the project, code-named MKULTRA. Unmarked vans, a remote lab deep in the woods, mind-altering substances administered by tight-lipped researchers . . . and a mystery the young and restless Terry is determined to uncover.

But behind the walls of Hawkins National Laboratory—and the piercing gaze of its director, Dr. Martin Brenner—lurks a conspiracy greater than Terry could have ever imagined. To face it, she’ll need the help of her fellow test subjects, including one so mysterious the world doesn’t know she exists—a young girl with unexplainable superhuman powers and a number instead of a name: 008.

Amid the rising tensions of the new decade, Terry Ives and Martin Brenner have begun a different kind of war—one where the human mind is the battlefield.

First off, this novel is dark. I mean Stranger Things has always been a bit dark, but it always had that same kind of lightness that a lot of Speilberg films had, which lightened that darkness some. Suspicious Minds does not have that lightness. First off, it’s focused on young adults – not children – so, it’s immediately a bit more grown-up than much of the TV series is. Add to that the new information about just what went on during Project MKUltra – Acid trips, electro-shock tests, and the full story about what happened to Eleven’s mother in this program – and you’ve got a story that might actually be a bit too dark for a family-friendly TV show to tackle. That being said, I love how dark this book is. Like I said earlier, I’ve always wanted Stranger Things to focus a bit more on the government conspiracy storyline and that’s exactly what this novel does.

Suspicious Minds is also surprisingly scary. Most of the scares in Stranger Things comes from the visual horror of the various monsters – and the Upside Down itself – so I wasn’t sure how that horror would translate in a novel. Gwenda Bond was smart, however, in not trying to replicate that horror. There are some monsters and supernatural stuff in Suspicious Minds, sure, but most of the scares come from the horrific things people in power – like Dr. Brenner – are doing to other people. The real scares come from seeing just how far Brenner is willing to go with this project; how many lives he’s willing to ruin, how many people he’s willing to hurt. The experiences that Terry – and her friends – go through in this novel are where the true horror lies, and Gwenda Bond does an amazing job at exploring that horror.

I don’t wanna spoil much of what happens in the book, so I’m not going to go into much detail about the actual plot of the book. I will, however, talk some more about the characters and the writing. There are four main characters in this book: Terry Ives (mother of Eleven), Alice, Gloria, and Ken. All four of them are part of the MKUltra research and all four of them are subjected to some pretty awful stuff by Dr. Brenner. As hinted at in the show, Dr. Brenner is trying to research the powers of the human mind and what it can do while also researching superpowered people – like Kali (Eight) and, eventually, Eleven. The book is told, primarily, from Terry’s point of view, though the point of view does occasionally shift to the other characters as needed. This works really well as it lets us get into Terry’s head and really see her as a fully three-dimensional character. In fact, Gwenda Bond does a great job at making every character in this novel feel fully developed, even side characters such as Andrew – Terry’s boyfriend – and her sister and her roommate. Like the show, the characters in this novel are some of the best parts.

The pacing in Suspicious Minds is also really strong. Things get moving pretty quickly and once they’ve started, they don’t stop. Each chapter is fairly lengthy – it’s a 320-page book with only 12 chapters – so each chapter feels almost like a mini-episode in a season of a TV show. This format works really well as every time you finish a chapter, you really feel like you’ve moved ahead in the overall narrative of the story. Every chapter has a point and a natural ending but each chapter also works with the rest to tell a complete, satisfying story. Bond perfectly balances a good amount of description with the narrative drive of the story. There is never a moment where you feel like the energy has been killed because too much time has been spent describing something but there is also never a moment where you find yourself longing for more description; it’s a really good balance. In general, Bond’s writing in this novel is just superb. Each character sounds distinct, the pacing is superb, the prose is engaging as hell. It’s just all around enjoyable.

All in all, I think I like Stranger Things: Suspicious Minds more than I like the actual TV series. It is everything that I wish the TV series was. It’s filled with lots of spooky government shenanigans, some truly horrific moments, and a bunch of characters that are fully formed and immediately relatable. Gwenda Bond’s writing is superb, immediately drawing the reader into the world of the novel and keeping their attention as the story unfolds and more and more mysteries begin to unravel. The pacing is superb; once the story gets started, it never stops and you find yourself never wanting to set the book down. Overall, I just really adored this book. It’s an absolute must-read for anyone who’s a fan of Stranger Things and I’d honestly even recommend it to people who didn’t love the show. If you like weird government conspiracies tied in with pseudo-history, you’ll like this book. It’s absolutely fabulous.