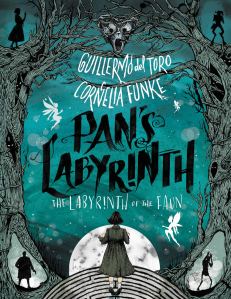 Novelizations of movies can really be a hit or miss affair. The best ones take the events that happen within a film and expand upon them in ways only a novel can do – bringing readers into the thoughts of the characters within a film and showing those same events from a different angle or with extra bits that the film might not have had time to show. Unfortunately, most film novelizations don’t do that – they to just be fairly strict prose conversions of the script. So, it’s with that mindset that I approached this “novelization” of Guillermo del Toro’s award-winning Pan’s Labyrinth – I hesitate to call this book a novelization because Pan’s Labyrinth came out thirteen years ago and most novelizations come out around the same time as the film they’re novelizing. With that context, it might be best to consider this book a retelling of the story featuring in the film – a screen-to-page adaptation, if you will, by a talented author – Cornelia Funke. As is always the case with any adaptation, does the story still work when transferred to this new medium? In the case of Pan’s Labyrinth: The Labyrinth of the Faun, the answer is yes and no.

“Pan’s Labyrinth: The Labyrinth of the Faun” by Guillermo del Toro & Cornelia Funke
Oscar winning writer-director Guillermo del Toro and New York Times bestselling author Cornelia Funke have come together to transform del Toro’s hit movie Pan’s Labyrinth into an epic and dark fantasy novel for readers of all ages, complete with haunting illustrations and enchanting short stories that flesh out the folklore of this fascinating world.

This spellbinding tale takes readers to a sinister, magical, and war-torn world filled with richly drawn characters like trickster fauns, murderous soldiers, child-eating monsters, courageous rebels, and a long-lost princess hoping to be reunited with her family.

A brilliant collaboration between masterful storytellers that’s not to be missed.

Pan’s Labyrinth is an R-rated film. Sure, it’s a fairy tale, but it’s a fairy tale aimed squarely at adults. It’s filled with violence and horrific imagery and all manners of things one might not want children and young teens to be exposed to. So, naturally, you’d think any novelization/adaptation of Pan’s Labyrinth would be aimed at adults. This doesn’t appear to be the case with this book. Amazon classifies this book as a YA-novel, and that sounds about right. The prose is more simplistic than one might find in your normal, run of the mill Adult Fiction novel, but some of the words used in the book are more complex than you’d find in anything simpler than a YA-novel. So, in terms of writing, this is definitely a YA-novel. This opens up a question though – why write an adaptation of a film that was originally targeted towards adults and target it toward a younger demographic?

Pan’s Labyrinth: The Labyrinth of the Faun walks this weird tight-rope between being true to the film and softening some of the edges. Nothing in the film is outright censored, but some of the more adult elements aren’t really elaborated upon. There is violence in this book, and sometimes it’s pretty brutal violence, but it’s rarely given the kind of description that would match the horror that came with seeing it on the screen. To me, that feels a bit like a cop-out. I don’t like it when stories have their rougher edges sanded down and it makes me want to wonder what the point in adapting this story is if you’re gonna have to tweak elements of it to fit a new audience. To be fair to this book, though, not that much is changed in the vast scheme of things. The novel follows the film’s plot pretty closely; certain elements are toned down a bit but nothing is really wholly missing. And, the horrific imagery and violence aren’t really important to the story, per se, but it does feel just a bit ingenuous to tone them down, especially as the story does involve a literal civil war. Then again, that scene featuring the amputation of a rebel’s leg is still in this book, so maybe things weren’t really all that toned down. It’s just a bit of a discordant mashup of tones for me. It’s not book-killing or anything, but it’s certainly one of the biggest things I noticed.

While I might question the point in this book existing given my previously mentioned points, it’s not that the book is remotely bad. It’s very well-written and well-paced and does nearly everything you’d want a novelization/adaptation of a film to do. Readers are taken into the heads of a number of different characters. Certain scenes are expanded upon or told from a new point of view. Funke utilizes the strengths of a prose novel to tell certain parts of the story in a way that a film couldn’t really do. And, best of all, there are some interludes scattered throughout that expand upon the Underground Kingdom and elaborate upon how a number of the characters in the “real-world” storyline tie into the events of the “Underground Kingdom” storyline. Those interludes were probably my favorite part as, by nature, they could really feel like a surreal fairy tale and offered something genuinely new to this story that I’m very familiar with.

At the end of the day, Pan’s Labyrinth: The Labyrinth of the Faun is an enjoyable read. As you read it, you may get confused at just who the book is for – is it for fans of the book? Is it for new readers? If so, is it for teenage readers? Adult readers? Does it even matter? Honestly, probably not. As is, it’s nothing particularly special, but it’s well-made. It expands upon the film in a number of ways – chiefly in those interludes that feature totally new material not seen in the film. Readers are taken into the minds of various characters, although the insight provided is never really as much as one would like – these insights pale in comparison to another novel adaptation of one of del Toro’s films, The Shape of Water (written by Daniel Kraus) – though, I still enjoyed these insights quite a bit. I enjoyed this novel a fair amount; it’s a quick read and it’s fun to revisit this story from a new point of view. I wouldn’t call it essential reading, but if you were ever curious about the film but found yourself frightened by some of the more severe imagery, this is a good way to experience the story. I’d still probably recommend watching the film a bit more than I’d recommend reading this book, but this is a pretty solid adaptation of it.