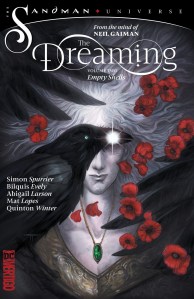 As I said in my review of the first volume of this new run of The Dreaming, one of my favorite things about Neil Gaiman’s original Sandman run was the way the comic’s story was partially about the very nature of stories. Gaiman played with various structures to examine the fabric of storytelling and why it’s always been such an effective means of communication. Everything else was the icing on this theme of a cake. This examination of storytelling is one of the key things that brings readers back to those comics time and time again. Simon Spurrier continued this approach in the first volume of his run on The Dreaming, and he continues it in this next volume – a volume that helps bridge the story of The Sandman with this new story being told here. It’s a really good graphic novel.

The Dreaming, Vol 2: Empty Shells (written by Simon Spurrier, art by Bilquis Evely and Abigail Larson)
As his kingdom crumbles and his subjects search for him in desperation, Dream of the Endless wanders the Earth as an exile from the realm he is meant to embody. Here, far from the Gates of Horn and Ivory, there are wonders and horrors that even an immortal cannot imagine—until they experience them firsthand.

When an ill-fated romance collapses, Dream is vulnerable to exploitation by sinister forces. And when the heart of an Endless breaks, worlds break with it. Meanwhile, as the Dreaming’s abandoned inhabitants hunt their absent sovereign, the realm’s reluctant new ruler strains against the confines of its throne, threatening to undo the very reality that supports it. What happens to a fairy tale’s inhabitants when their author goes missing?

This volume of The Dreaming really leans into that storytelling theme. When last we saw our heroes, they’d learned that the new ruler of The Dreaming was Wan, a sentient AI from origins unknown. But how could a machine rule over a realm as illogical as the Dreaming? Could a machine even manage to understand the more abstract nature of storytelling? These are some of the questions which Spurrier poses in this volume – and some of them even get answers. Spurrier is really on top form in this collection. I remain impressed at how he’s able to spin such a complicated story without it ever feeling too overwhelming to the reader. He’s juggling a number of different plotlines, characters, and mysteries with a real finesse – you never feel like you’re waiting too long to find out some kind of important piece of information, but you’re also not learning things at too quick a speed. Spurrier has found a really solid pace with which to tell this story and it seems to be working very well. The best moments are often when everything slows down for a beat and the characters can reflect on something they’ve just witnessed (particularly Wan and Abel, who both have a number of really wonderful scenes throughout these issues as Wan begins the process of learning how to understand and rule the Dreaming). Overall, the sheer structure of this collection is really strong. Some questions are answered, themes are deepened, new questions are posed, and it all ends on a really killer cliffhanger that leaves you desperately wanting to know where the story will go next.

While the first volume of The Dreaming very much had the feeling of a title wanting to set up its own world with its own rules, this volume feels a lot more confident in itself and, as such, begins to tie in elements from the larger Sandman universe into the story. Here, we see the return of such iconic Sandman characters like Rose Walker and iconic locales such as the World’s End pub/inn (where we get some of the best ruminations on storytelling found in this comic as both Wan and Dora learn what a story is actually made of). What I like about these callbacks is that it doesn’t feel like fan service, but rather a natural expansion of the universe. Rose Walker only comes back into the story because she knows why Daniel/Dream has disappeared from the Dreaming and what he’s up to  (the answer to that question feels very in character for Daniel and Spurrier writes impressively well for that character). The World’s End pub only appears because our heroes (namely Matthew and Dora) are tracking Daniel’s steps and he ended up at the pub at some point (though, thankfully, a great deal of time is spent there and we get to enjoy some really fun stories while the characters go about their missions). Every reference clearly has a purpose and Spurrier ensures the older elements tie together with the newer elements in order to best tell this new story he’s telling. But, as a Sandman fan, I can’t pretend like it wasn’t a lot of fun seeing some of these elements return. I’m just glad it was done in such a well-written manner instead of being shoehorned in.

Comics are one of the most collaborative mediums – you need both the visuals and the writing to be great if you want to pull off the story you’re trying to tell. As we’ve already established, the second volume of The Dreaming has some great writing – but it also has some really great artwork. This go ’round, the artwork is split between two artists – Abigail Larson, who drew the art for the first two issues in this collection, and series-regular, Bilquis Evely, who drew the art for the rest of the collection. Both of these artists do an immensely impressive job while also staying true to their style. Larson does the art for the two issues involving Rose and Lucien, and her artwork is very reminiscent of a fairy tale – which seems pretty fitting given the scripts for those issues. Evely’s art continues the style she set up in the first volume of The Dreaming, continuing to expand on the world and translate some really strange ideas into a visual form. It’s rather impressive how well these two art styles work together. You definitely notice the difference, but it doesn’t feel at all distracting and actually enhances the overall story being told. I really feel like Larson and Evely’s artwork in this volume is some of the best artwork in any comic published in the last few years.

All in all, I really dug this second volume of The Dreaming. It took everything I loved about the first volume and ran with it, deepening the characters and their relationships, exploring more of the intricacies of the plot, and continuing to broaden the overall Sandman Universe. Simon Spurrier is on top form with these issues and his writing is a joy to read. As is the artwork from series regular, Bilquis Evely (Issues 9-12), and guest artist, Abigail Larson (Issues 7&8). Their artwork brings Spurrier’s words to life and does a lot of the heavy lifting for the world-building. It can’t be easy to draw something like The Dreaming, and yet these artists have done so. If you’re a fan of Neil Gaiman’s Sandman series and you’re not reading The Dreaming, you should be.