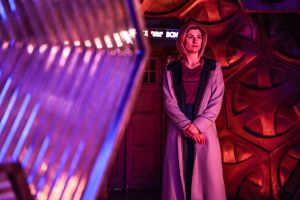 This episode was a weird one for me because, unlike last week’s, I had exactly no excitement for it. I knew there was no way the episode would actually be continuing any of the overarching plot threads introduced in Fugitive of the Judoon, and after an episode as explosive as that one, it was really hard to be excited for an episode that would just be bog-standard Doctor Who. Now, to be fair, there’s nothing wrong with regular, old stand-alone episodes of the show, but after something as exciting and groundbreaking as last week’s episode, it’s difficult to really get excited for “another random adventure!”. With that said, though, Praxeus is an excellent example of how great a stand-alone episode of Doctor Who can be. (Spoilers follow!)

Season 12, Episode 6 – Praxeus (written by Pete McTighe and Chris Chibnall, directed by Jamie Magnus Stone)
What connects a missing astronaut in the Indian Ocean, birds behaving strangely in Peru and a US naval officer who washes up on a Madagascan beach? The Doctor (Jodie Whittaker), Yaz (Mandip Gill), Ryan (Tosin Cole), and Graham (Bradley Walsh) investigate.

On the whole, I really enjoyed Praxeus for what it is. Sure, it’s not really anything special, but there’s a charm to the simplicity of its plot – and a lot of room for some great character moments. This might be one of the most Classic Doctor Who-feeling episodes to air in a long time, both in tone and subject matter – and I mean that in the best way possible. At the heart of Praxeus is a two-part story. The first is a simple mystery: how are all of these occurrences (mysterious bird behavior, two dead bodies, and an infected astronaut) connected? The answer is simple: an alien pathogen that is drawn to plastic (of which the Earth is full of). And once that is solved, the story shifts into its second part: where did the pathogen come from and how do the characters stop it from infecting the Earth. While none of these plot elements are particularly unique, they’re used to great effect here. It’s a simple story, but it’s one that really works. McTighe uses these familiar elements to craft a story that feels poignant (in a far subtler way than this season’s earlier ecological episode, Orphan 55), tense, and exciting.

The main way he does this is through some truly well-rounded characters. Firstly, it’s really nice getting to see the companions all doing something important to the story. I appreciate that this season has taken to splitting them up as often as it can because it gives the characters a chance to shine brighter than they’re able to shine when all of them are together and sharing screen time with the Doctor, who tends to suck up all of the oxygen in any room she’s in. Here, we have Yaz putting her police background to good use and taking the lead on numerous parts of the investigation, including one instance that created some nice tension between her and the Doctor, and also made me fear for Yaz’s safety as she ended up teleported right into the antagonist’s lair (for the third time this season). Mandip Gill continues to deliver impressive performance after impressive performance and it will always please me to see her given more to do in an episode. Ryan and Graham do slightly less, but both of them have plenty of opportunities to shine and Tosin Cole and Bradley Walsh continue to bring some wonderful comedic relief to their scenes. The Doctor, herself, also has many strong moments – though, understandably, none quite as strong as the ones from the previous episode. Whittaker seems to have found some great footing for her Doctor this season and it’s a joy to see how good her performance is alongside how good the rest of the core cast’s performances are.

Of equal joy are the guest characters, nearly all of whom feel well-rounded and fully human. First, there’s Gabriela (Joana Borja), who has all the makings of a companion. I appreciated how youthful she felt and how McTighe managed to make her not feel like a stereotype of a vlogger while still invoking that element of her character. Next is Aramu (Thapelo Maropefela), who seems to be the character most in tune with the birds’ strange behavior. I liked him a lot, but it’s a shame he just sort of disappears about halfway through the story and isn’t seen or mentioned again. Then there’s the previously mentioned astronaut, Adam Lang (Matthew McNulty), and his husband, Jake (Warren Brown). These two are probably the guest characters who get the most development, and it’s nice to finally have some prominent LGBT characters. Their romance feels very real; it’s strained at first, but they’re able to reconnect by the end of the episode. But even in the strained moments, you always feel that there is love between Adam and Jake, and McNulty and Brown portray that beautifully. All in all, Praxeus is an episode with some really well-developed side characters who team up with the Doctor and her friends to fight off the episode’s threat.

All of which brings us to our antagonist. While I do feel like it was a bit of a missed opportunity to not bring the Sea Devils back for a story like this, that so revolves around plastic-based pollution, Suki (Molly Harris) does make for an interesting antagonist. I wouldn’t call her a villain, per se, as the true “villain” of the story is the Praxeus pathogen itself, but she’s certainly an antagonist. Her motives, though, are fairly decent in that she is trying to find an antidote for the pathogen. She just doesn’t care if it infects all of humanity in the process. So, that’s pretty interesting and I dug it a lot. I also really enjoyed the way she was revealed as a villain to the audience. It was one of those twists that shouldn’t have felt like a twist because it makes total sense but still felt surprising because she’d done nothing to earn our distrust. Those kinds of twists are the best ones and they work even better when they’re built off of well-written characters – and Suki definitely falls into that category. I love a good morally-dubious antagonist.

As for the direction, editing, and visuals, Praxeus remains stellar. Jamie Magnus Stone, director of the first half of Spyfall, returns for this episode and his style is easily noticeable. He does a great job of balancing a lot of different locations, some great action scenes, and some quieter character beats. This is one of those episodes that just feels really well-paced. Scenes are given ample time to breathe, when necessary, or they’re filled with tension and well-shot action when necessary. It feels clear that Stone took some inspiration from Alfred Hitchcock’s The Birds – particularly during the scene where the birds attack the lab. But throughout the episode, he does a great job of using the birds as a method of creating a really ominous feeling. Speaking of visuals, where there isn’t a cool alien in this episode, Stone utilizes some really creepy body horror to visually depict the effects of the Praxeus pathogen. It’s hard to describe how creepy it looks, but it works remarkably well and manages to be scary without being gruesome. On the whole, it’s a really well-directed episode, filled with some wonderful and creepy imagery.

My biggest complaint with Praxeus isn’t even really a problem with the episode itself, but with its placement in the season as a whole. Last week’s episode felt like such a monumental shift in the overall trajectory of the season and it feels really weird to just have a regular old adventure directly after an episode like that. As I said, it’s not that there’s anything wrong with the typical Doctor Who format, it’s just that after a reveal as big as a previously-unseen Doctor, you’d think the characters would be changed in some way or, at least, would acknowledge these major events. I mean, the Doctor literally just learned she had an entire life she knew nothing about! But it’s not even mentioned here, even in passing. It’s as if Praxeus wasn’t actually meant to come after Fugitive of the Judoon – which might be true as there was a rumored change to the episode order after filming, switching Fugitive of the Judoon (which was believed to be episode 6) with Praxeus (believed to be episode 5). There’s no concrete proof of this, of course, but it might explain why none of the events in Fugitive of the Judoon are mentioned at all here.

And, to be fair, it’s not like there’s really any room within Praxeus to have a serious discussion about the events of last week’s episode and, on its own, it doesn’t really need to address those plot points. But the episode doesn’t exist in a vacuum; it’s placed directly after that episode and it feels really weird to watch an episode in which the very obvious consequences of the Ruth-Doctor’s existence isn’t felt at all. It’s the exact reason why I said such a plot twist doesn’t work in the kind of show that Doctor Who is; without the heavy serialization such an arc needs, it will always feel weird when you have a regular, “filler” episode directly after a major plot revelation. And it will make those regular episodes feel less special and less good – which does them a great disservice. And that’s exactly what’s happened with Praxeus. It’s an episode that deserves attention and love but will ultimately feel underwhelming because it’s placed after an episode that so desperately needs follow up in both plot and character arcs.

That said, Praxeus is still an excellent episode of Doctor Who. It’s got a really great premise, some great supporting characters, some meaty material for the companions (mostly Yaz, but I’m happy she gets a thing!), and is very well produced. It’s a simple story, but it’s one that’s a lot of fun to watch. Honestly, it’s really a 4.5/5 episode that’s hindered by being placed directly after a groundbreaking episode and featuring no follow-ups on any of those revelations. It’s not really fair to the episode, but it’s hard not to feel a level of disappointment going from the insanity that was last week’s episode into a very normal, run of the mill story. There’s nothing wrong with that, but it’s definitely not what I was craving after last week’s episode. For those who were desperate for a regular, old episode, Praxeus should suit you nicely. And for the rest of us, it’s still a really great episode of Doctor Who and it continues the run of really good episodes this season has had. Fingers crossed this strong run of episodes can continue!