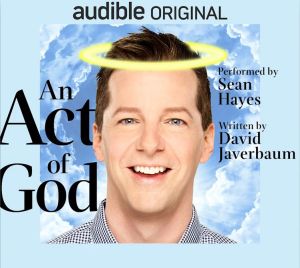 First things first, I really love this play. There’s something really nice about a piece of theatre that knows exactly what it’s trying to be, is tightly written, and gets to the point in a quick, succinct, and entertaining way. An Act of God is a tight, 80-minute play (give or take) and it manages to be one-part tell-all, one-part a dishing out of a new set of Commandments, and one-part confessional. And it’s devilishly funny, too.

I will always deeply enjoy stories where God is depicted as either A) Totally uncaring or B) just so utterly and totally exhausted with the whole being a God thing. There’s something so interesting about a deity who’s sick and tired of being a deity. It’s one of my favorite things about the first season of Miracle Workers and it’s something An Act of God does very well. This God isn’t quite as done with humanity as the Steve Buscemi God is, but he’s pretty close. He’s dealt with years and years of people misinterpreting His word and killing in His name (He doesn’t need any help killing, thanks) and He’s finally decided to come back down, inhabiting the body of a famous actor (in the case of the Audible adaptation, Sean Hayes), and deliver unto humanity a new set of Commandments for a modern age. The God of An Act of God is also a troubled God. He’s grown a bit insecure, feeling as though there is something wrong with Him, and some of the best parts of the play are those moments where God gets to be introspective about His actions and what He’s done or hasn’t done to help humanity over the years.

On that note, I think it’s rather impressive how well the play threads the line between being written from a clearly atheistic point of view and being respectful towards Christianity. Obviously, Javerbaum has some opinions on Christianity – most notably the hypocrisies found within many major sects of the religion – but he takes care not to be too dismissive of the whole thing, or of those who believe in it. His God is not one who hates humanity, just one who feels His message has been misunderstood. Sure, An Act of God is highly irreverent – but it’s also surprisingly meaningful. Throughout the play, God responds to various questions from humanity (delivered to Him by one of His angels, Gabriel and Michael) and it’s in those responses where we get some insight into Javerbaum’s opinion on both God and the stories found within the Bible. These questions also give us the chance to finally hear God answer some of the questions we’ve all wanted answers to over the years – and there’s something cathartic to hearing God, even an obviously fictional representation of Him, atone to the things He’s done or hasn’t done to help humanity. All in all, this play is surprisingly deep for something so satirical on the surface.

As for Audible’s adaptation of it? It’s very good. Sean Hayes is excellent as God – though, technically, he’s playing God as though God took over the body of Sean Hayes; it’s a funny joke in context, I promise. Hayes brings just the right amount of sass, irreverence, and power to his portrayal of God. He excels in the moments where God has to be vulnerable and he frightens in the moments God has to be scary. This kind of role seems tailor-made for an actor like Hayes to inhabit. The Audible version also changes very little of the script from its previously published edition. A few jokes have been tweaked, a few of the more overt references to this story normally happening on the stage in a theatre have been cut or changed, etc. Although, there are still times where the dialogue refers to the play taking place on stage, so it is a little confusing why they’d change some of those jokes but not all of them. But, regardless, it’s nice to have the vast majority of the text carried over verbatim here. Perhaps the most notable part of the Audible adaptation, aside from Hayes’ acting, is the sound design. Fitz Patton does an excellent job of keeping the long stretches of monologues interesting by infusing them with sound effects and music, as needed. It’s never distracting and it only serves to enhance the overall listening experience. Overall, it’s a pretty stellar adaptation.

All in all, An Act of God is an excellent play. It’s tightly-written, well-paced, extremely funny, and surprisingly poignant. It manages to both criticize organized Christianity while still being respectful to its core values. It calls out what needs to be called out and lifts up those elements worth celebrating. Its depiction of God is both interesting and relatable and it’s just such a joy to read. The Audible adaptation of the play is similarly great, filled with a truly superb performance from Sean Hayes (and Cheyenne Jackson and Colman Domingo as Michael and Gabe). While there are a couple of inconsistencies in what got changed between the stage script and the audio script, it’s really nice to have some way of experience the play (other than reading it). It’s no substitute for a DVD of the play or, preferably, a live performance of it, but it’s still a very good way to experience this superb play. I fully recommend both the script and the Audible adaptation.