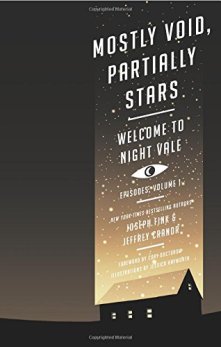 Mostly Void, Partially Stars is a collection of the first year’s worth of scripts (and the script of the first live show Condos) from the podcast Welcome to Night Vale written by Joseph Fink and Jeffrey Cranor. In addition to the scripts, Mostly Void, Partially Stars contains introductions to every episode featuring behind the scenes tidbits such as the inspiration for the episode or how it was put together. In Mostly Void, Partially Stars, readers are introduced to the town of Night Vale and Cecil Palmer, the host of the local community radio station’s news show. As the story begins, a new scientist, named Carlos, arrives into town, sparking interest from Cecil. Coinciding with this event is the discovery of a civilization underneath one of the lanes in the bowling alley. As the year goes on, these plot threads will collide in a major way. This review will be in two parts; the first reviewing the book itself, the second reviewing the content of the scripts and the first year of the podcast as a whole. END_OF_DOCUMENT_TOKEN_TO_BE_REPLACED