Mary Shelley + The Doctor + Gothic Ghost Story = genius idea. I mean, what else could you want? It’s such a good idea that it’s genuinely surprising the show has never done something like this before. To be fair, Big Finish Productions have done some audio adventures featuring Mary Shelley teaming up with Paul McGann’s Eighth Doctor, but never has the show itself taken us on a trip to this particular part of history. And what better night for a Doctor Who story to take place on than the night Mary Shelley purportedly came up with the idea for her classic, Frankenstein. So, this would all seem like a pretty good set up for a great episode of Doctor Who. And, to be fair, it is – but not for the reasons you’d think. At the end of the day, it’s kind of a Frankenstein of an episode – pun intended – in the best possible way. (Spoilers ahead!)

Season 12 Episode 8, The Haunting of Villa Diodati (written by Maxine Alderton, directed by Emma Sullivan)
‘Nobody mention Frankenstein. Nobody interfere. Nobody snog Byron (Jacob Collins-Levy).’ Should be easy, right?

The Doctor (Jodie Whittaker) and her gang (Tosin Cole, Bradley Walsh, Mandip Gill) arrive at the Villa Diodati at Lake Geneva in 1816 on the night that inspired Mary Shelley’s (Lilli Miller) Frankenstein. The plan is to spend the evening soaking up the atmos in the presence of some literary greats, but the ghosts are all too real, and the Doctor is forced into a decision of earth-shattering proportions.

END_OF_DOCUMENT_TOKEN_TO_BE_REPLACED 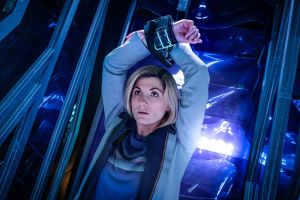 This week’s episode of Doctor Who was another one of those episodes where I had no idea what to expect before watching it. The BBC’s promotional efforts for the episode played things very close to the chest, revealing only that it would be a fairly creepy episode and the villain, Zellin (Ian Gelder), would be doing something involving dreams and nightmares. Aside from that, it was super unclear what to expect from the episode. And, frankly, I think it really worked out in this instance because Can You Hear Me? is one of those episodes that has to be seen to be truly appreciated and understood. So, did I like the episode? For sure, though I think it could have benefitted from being a two-part story. (Spoilers follow!)

Season 12, Episode 7: Can You Hear Me? (written by Charlene James and Chris Chibnall, directed by Emma Sullivan)
From ancient Syria to present day Sheffield, and out into the wilds of space, something is stalking the Doctor (Jodie Whittaker) and her friends. As Graham (Bradley Walsh), Yaz (Mandip Gill) and Ryan (Tosin Cole) return home to see friends and family, they find themselves haunted by very different experiences. Who is the figure calling from beyond the stars for help, and why? And what are the fearsome Chagaskas terrorising Aleppo in 1380? To find the answers, Team Tardis embark on a mission that forces them to face their darkest fears.