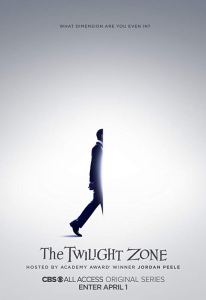 Rod Serling’s The Twilight Zone is widely considered a beloved show from TV’s first golden age. And rightfully so. Serling, famously annoyed at the neutering many of his previous projects had gone through at the hands of network execs, managed to blend the serious subject matter he wanted to discuss with elements of science fiction/fantasy/horror, thus allowing his radical ideas to slip by a bit less noticed by the network brass. It was a genuine work of genius that brought science fiction into the mainstream lives of many Americans who, otherwise, might not have been exposed to the genre in such a sophisticated way. What is often forgotten, however, is how wildly inconsistent the original run of the series could be. For every brilliant, memorable episode, there was at least one episode – if not multiple – that was utterly forgettable. That’s the dice roll you get with anthology shows and The Twilight Zone was no exception. With that in mind, it should come as no surprise to hear that the first two episodes of CBS’ newest reboot of the series are just as inconsistent as the originals were. (There will be spoilers for the first two episodes of The Twilight Zone.)

The original “The Twilight Zone” premiered on Oct. 2, 1959 on CBS. The series took viewers to another dimension, a dimension not only of sight and sound, but of mind. As the godfather of sci-fi series, the show explored humanity’s hopes, despairs, prides and prejudices in metaphoric ways conventional dramas could not.

In 2019 viewers will enter another dimension with Jordan Peele and Simon Kinberg’s modern re-imagining of the classic. CBS All Access’ THE TWILIGHT ZONE anthology series will bring the original show’s legacy of socially conscious storytelling to modern day audiences, exploring the human condition and holding a lens up to the culture of our times.