So, I really dug the first three episodes of Miracle Workers and I really dug the book, What in God’s Name, that the show was based on. With all that said, I was immensely curious as to whether or not the show would stick the landing with its final four episodes. Would it end in a satisfying way or would it just sort of fizzle out? Thankfully, it managed the former, with each of the four final episodes being better than the last, all culminating in a finale that brought all of the plot threads to a nice, satisfying close while also concluding many of the character arcs that had been set up. While different from how the book ended, the finale of Miracle Workers worked perfectly for what the TV series had set up.

Episode 107 – “1 Hour” – Written by Dan Mirk, directed by Maruice Marable
Craig risks it all in a desperate attempt to save Earth and all of mankind.

END_OF_DOCUMENT_TOKEN_TO_BE_REPLACED 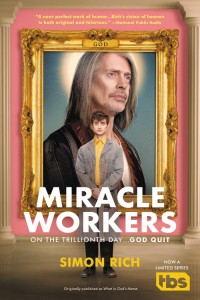 Tonight, TBS is premiering a new show, Miracle Workers, based on Simon Rich’s novel, What In God’s Name?, a book about God deciding he doesn’t want to keep dealing with humans, so he’s going to destroy the Earth instead – leaving two angels, Craig and Eliza, the task of convincing God that humanity is worth saving. Since the novel wasn’t too long, I thought I’d give it a read before the show premiered on TV to see how good it was. I’m happy to report that it’s a genuinely entertaining read.

Welcome to Heaven, Inc., the grossly mismanaged corporation in the sky. For as long as anyone can remember, the founder and CEO (known in some circles as “God”) has been phoning it in. Lately, he’s been spending most of his time on the golf course. And when he does show up at work, it’s not to resolve wars or end famines, but to Google himself and read what humans have been blogging about him.

When God decides to retire (to pursue his lifelong dream of opening an Asian Fusion restaurant), he also decides to destroy Earth. His employees take the news in stride, except for Craig and Eliza, two underpaid angels in the lowly Department of Miracles. Unlike their boss, Craig and Eliza love their jobs – uncapping city fire hydrants on hot days, revealing lost keys in snow banks – and they refuse to accept that earth is going under.

The angels manage to strike a deal with their boss. He’ll call off his Armageddon, if they can solve their toughest miracle yet: getting the two most socially awkward humans on the planet to fall in love. With doomsday fast approaching, and the humans ignoring every chance for happiness thrown their way, Craig and Eliza must move heaven and earth to rescue them – and the rest of us, too.