The Doctor and Bill

The new season of Doctor Who premiered today with an episode called “The Pilot”, directed by Laurence Gough and written by showrunner Steven Moffat. This episode begins Peter Capaldi’s final season as the Doctor (and Moffat’s as showrunner) and introduces Pearl Mackie as new companion Bill Potts. From the BBC Website: in this episode, two worlds collide when the Doctor meets Bill, and a chance encounter with a girl with a star in her eye leads to a terrifying chase across time and space. Bill’s mind is opened to a universe that is bigger and more exciting than she could possibly have imagined. But who is the Doctor, and what is his secret mission on Earth?

First things first: Pearl Mackie is superb as Bill. Bill is immensely different than Clara; she feels more like a regular person than Clara did. From the get go, Clara had that air of “important special person” while Bill really feels like someone you’d meet on the street. One thing I particularly like about Bill is that she is unabashedly nerdy. Several times, she mentions something being “SciFi” and it’s just endearing having a companion who knows all the SciFi tropes and comments on them throughout a show that shamelessly embraces all those tropes. And just in general, Bill is endearingly normal. She could be somebody any of us know in reality. I mean, in her first scene she literally ends up sorta fangirling about this girl she’s kept giving extra chips too (because, supposedly, the Doctor was perving on her). There’s something really endearing about her first scene with the Doctor. He’s noticed her in his lectures because she smiles at things others would normally frown at. I liked that a lot. And from the first bit, Bill totally doesn’t let the Doctor get away with any of his crap. The Doctor decides to tutor her. So, they end up spending a lot of time together in the first bit of the episode. There’s this lovely moment where Bill discovers a box of photographs of her mom that she never knew she had before (after telling the Doctor in one of their tutoring sessions that she didn’t have any pictures of her mom). In one of the pictures, she can see the Doctor’s reflection in a mirror. So it’s pretty heavily implied that the Doctor took these pictures after hearing this from Bill. This is somewhat significant as the Doctor has taken to keeping pictures of River and Susan (his granddaughter) on his desk. Turns out he’s becoming a bit sentimental.

The plot itself is both simple and complex. The Doctor has been teaching at this university for decades (potentially somewhere in the realm of 50-75 years). He’s there in disguise because he’s protecting something he’s keeping locked away in a vault underneath the school. The episode starts with him deciding to tutor Bill and continues for a while as a bond develops between them. Things start to get moving when Bill meets a girl named Heather who has a glint in her eye. Bill finds Heather attractive and spends some time with her; Heather leads her to a weird puddle that reflects her face… but something’s not quite right. Eventually, Bill leads the Doctor to the puddle who deduces that the puddle is not actually reflecting anything: it’s mimicking whoever looks in it. The reason the reflection looks wrong is because you only ever see your face in reflections the wrong way around. (The left side of your face is the right side of your face in a mirror) but the puddle was showing her face the correct way. 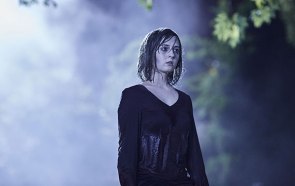 Things get even tenser when Bill arrives at her flat that night to discover the faucets running with nobody home. She looks around and spots an eye in the drain. Naturally, she runs back to the university and encounters Heather in the courtyard. Only something isn’t right: Heather is drenched like she’s just emerged from a pool… or, maybe, a puddle. Bill realizes that Heather is actually dead and is now mimicking everything Bill says. Bill runs to the Doctor’s office who witnesses Heather rise from a puddle of water. To protect her, the Doctor leads her into the TARDIS and the adventure begins.

A Dalek in action

One of my favorite things about this episode is that there’s nothing earth-shattering about it. It’s a story about Bill having to let go of a girl she loves (because that girl has been taken over by some kind of sentient alien liquid spaceship thingy and now wants Bill to come with it, meaning Bill would die). That’s the entire plot of the episode. At first, the Doctor and Bill think that the alien is trying to kill them, so they travel around time and space trying to escape it. Ultimately, the Doctor takes them to a battlefield where the Daleks and the Movolians are fighting, hoping that a Dalek will be able to exterminate the sentient liquid thing.

It’s here that the most emotional moment of the episode happens; where Bill figures out what the alien wants. She connects with the alien-who-looks-like-Heather, who shows her all the possibilities of what could be if Bill were to join Heather. But, ultimately, Bill has to let Heather go so Heather can let Bill go. And it’s an extremely emotional moment and one that’s executed really well. Pearl Mackie really shines in this bit.

The Doctor is hesitant to let Bill keep her memories, but is ultimately persuaded by his own guilt (and the nagging of the TARDIS and the pictures of Susan and River) into letting her travel with him for the hell of it. It’s another good moment, just watching Capaldi’s Doctor throw fear to the wind.

The episode is actually full of moments like that. There’s a lot of both Bill and the Doctor being amazed and happy around each other and around the things they’re doing. The first time Bill sees a new planet, her eyes are wide with wonder. It’s a beautiful moment. It’s been so long since the show has been able to have this kind of feeling, and I didn’t realize how much I missed it.

Bill is incredibly smart, in different ways than someone like Clara was, though. Bill is able to figure out what the Doctor’s doing and guilts him into not wiping her memories (which he would’ve done in the same way he wiped Donna’s memories way back when), and it’s a cool moment where she confronts him about him underestimating everyone else’s intelligence. Bill is given so many moments to shine in this episode and I already love the character immensely.

The directing is superb. Lawrence Gough really plays up the creepy factor of water chasing after you. It’s another example of Moffat turning something fairly normal and innocuous into something terrifying. I’m never gonna look at puddles the same way again. Murray Gold’s music is similarly wonderful, especially the newer stuff written for Bill. Both Peter and Pearl are superb in the episode, and it’s ultimately a good time. 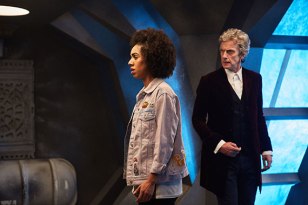 Bill and the Doctor facing the Daleks

It’s simple, fun, moving, and quintessentially Doctor Who. It’s a really good opening episode. (And the trailer at the end of the episode has some amazing moments in it that have really pumped me up for the rest of the season.) It’s a good episode for newcomers to watch as it introduces all the main things about Doctor Who through the introduction of Bill as the new companion. And it’s a great introductory episode, at that. Probably one of the best companion introductions in a while.

Doctor Who airs Saturdays on BBC One and Saturdays at 9 on BBC America.