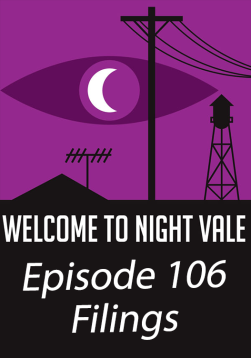 I’m going to start reviewing/recapping episodes of Night Vale on this blog mostly as a way for me to remember things that have happened in earlier episodes and have an easy way to reference them when a future episode makes a callback to an earlier one. As such, these recaps will always contain spoilers for the episode it’s reviewing. In this episode, entitled Filings, the angels go to the hall of records to register as real beings and some odd things happen as a result. It’s a pretty rad episode. You’ll see why.

The episode begins with an update about what the angels are up to in the wake of Old Woman Josie’s death. The Erikas are in the process of filing papers to officially exist. This turns out to be more complicated than anticipated as each time they try to file their paperwork, they are told that something is either missing or not quite right. Other citizens filing paperwork have become affected by the angels’ efforts – since citizens still can’t acknowledge the existence of angels – and have been suffering odd side effects any time they touch an angel – including the appearance of cracks in the ceiling.

The Erikas are also still fighting with Josie’s daughter, Alondra, over the rights to Josie’s estate. As Josie left no will stating that anything went to the angels, Alondra is claiming that it’s all rightfully hers as the next of kin. The Erikas have hired Miriam Adelman, one of the five-headed dragons, to represent them. Miriam accidentally burns Alondra, who is now suing Adelman for damages. It’s also announced that Alondra is selling Josie’s house and offering rebates for various damages: namely weird slits in the walls that aren’t quite portals that lead to rooms that shouldn’t possibly be there. From the not-quite-portals, various anachronistic people have been emerging and returning – causing Alondra to consider them as current renters and subsequently raising the price of the house again.

Meanwhile, a new and mysterious intern has arrived at the radio station. The intern never talks or really acknowledges Cecil’s existence in any way, which Cecil considers extremely professional. Cecil sends the intern to get Cecil’s lunch and is visited by the Faceless Old Woman Who Secretly Lives In Your Home. The Faceless Old woman comes bearing news: the Distant Prince has teamed up with the Woman From Italy, a mysterious and malicious woman who once visited Night Vale. The harbingers of the Distant Prince have been gathering the ears of prominent politicians from Night Vale and intend to sew them onto the walls of the Hampton Inn continental breakfast in order to create portals into many dimensions simultaneously and eventually destroy time itself and collapse Night Vale into a dead singularity. So, fun stuff.

A dense fog has rolled into town from a giant slash in the sky above the rec center, as well as some pteranodons and a commercial airliner (callbacks to things that appeared from cracks in the sky in previous episodes). Naturally, panic and chaos are ensuing from the area. Or it’s just the Battle of the Bands soundcheck (which Josh Crayton and his boyfriend are organizing).

More fissures in reality continue opening and revealing truths that never should have existed, including a castle sitting on top of a barn, Frances Donaldson suddenly knowing how to play piano, Lary Leroy’s wife Chrysette (who he never actually married and hasn’t seen since school) mowing the lawn, and fire chief Ramona Incarnassian finding a rock in the shape of Harry Styles’ liver.

After all this, Cecil’s intern still hasn’t returned. Cecil notices the intern left his wallet on Cecil’s desk, so Cecil starts snooping through it to find out the intern’s name. Cecil notices something weird, and after the weather, we find out that Cecil found his own driver’s license in his intern’s wallet. It turns out that the intern is no other than a younger Cecil, himself. Cecil encounters his younger self in the bathroom, and witness the events that were last heard in the tapes that Cecil found way back in episode 33: Intern Cecil looking directly in a mirror (even though his mother had always told him that mirrors were dangerous), a growing hole in reality appearing behind him, and talking about his feelings about working as an intern only to have a vision of a mysterious dark planet lit by no sun and end up attacked by something from the hole in reality.

Present-day Cecil is forced to watch all of this happen, unable to speak or move. After the attack, Intern Cecil and his wallet disappear. Cecil tries to look in the, now cracked, mirror for some sign of his younger self, but only sees his own reflection, distorted by the cracked mirror, and the hole in reality which disappears the moment Cecil turns around to look at it.

The episode ends with Cecil reflecting on this; the truths that should never have existed; the impending danger of the Distant Prince, the Woman from Italy, the five-headed dragons led by Hadassah McDaniels, and Huntokar; and the seeming failing of reality itself.

The angels have successfully filed their paperwork and have been told a hearing to determine their existence has been scheduled for sometime between the last Friday of this month and the last Friday of 2023. He tells citizens to keep pointing out the existence of angels and telling them they’re real as the only way to make them real is to say so.

The episode ends on this note, and man what an episode this was. Since Night Vale returned in February for the second half of this season, the episodes have been really strong. The increasing imminence of the threat from the Woman from Italy and the Distant Prince has been gripping, as has the ongoing drama between the angels and Alondra Ortiz.

I also loved how so much of this episode seemed to resolve things that happened earlier in the show’s history. In this one episode alone, we seemingly have answers for the circumstances behind the appearance of the pteranodons and the commercial jet from earlier episodes as well as what exactly happened to young Cecil at the end of the tapes that Cecil listened to back in episode 33. Is all of this part of the timelines merging/being destroyed (tying in with Simone Rigadeau and her belief that the world ended, and the contradictory existence and destruction of Nulogorsk, and the odd alternate timeline stuff from [best of?])? How does the Distant Prince and the Woman From Italy and Huntokar fit into all of this? Are they somehow involved in the timeline collapsing? Is this a result of the success of their supposed future plan to destroy time and render Night Vale into a dead singularity? I don’t know, but I’m excited to see where all this goes as we start getting closer to the season finale. I haven’t been this excited about a season arc in Night Vale since season two’s StrexCorp plotline.

The show has hit its stride again in telling stories that meet at the crossroads of creepy and moving. Cecil’s acting continues to be as strong as ever, and the usage of Disparition’s music continues to provide the perfect atmosphere for these stories to thrive in. These past episodes, and really the whole fifth season in general, has been a consistent reminder as to why I love this show so much. It balances these huge ongoing stories with the smaller everyday problems of the city and the emotional lives of its citizens. It continues to feel like a small town radio show reporting on the news of a small town where terrifyingly odd things keep happening. And it’s addictive; waiting for the next new episode is one of those pains that you enjoy feeling.

This episode gets 5 out of 5 wands from me. Bring on the next one!

Welcome to Night Vale is released on the first and fifteenth of each month. It can be found on iTunes, YouTube, Soundcloud, and more. More info can be found on their website.