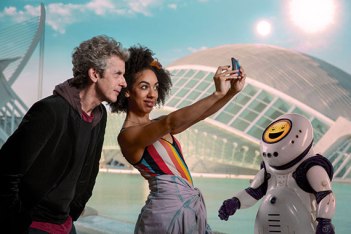 We’re back for another review of Doctor Who! As always, this review will not be spoiler free, so if you’ve yet to see Smile, then you should probably watch the episode first. This week’s Doctor Who is called Smile and was written by Frank Cottrell-Boyce and directed by Lawrence Gogh. Smile takes the Doctor and Bill into the distant future as they land on a planet inhabited by microbots whose sole job is to make sure the humans who will soon be living there are happy. However, something has gone wrong, and these microbots have killed the entirety of the skeleton crew (the group of humans sent to prepare the planet for colonization). It’s up to the Doctor and Bill to find out what’s happened and why before the colonists arrive and suffer the same fate as the skeleton crew.

There are a lot of things to like about this episode. Firstly, it’s mainly another character piece. Aside from a small scene with Nardole (Matt Lucas) at the beginning of the episode, the first thirty minutes consist only of scenes between the Doctor (Capaldi) and Bill (Mackie). Structuring the episode like this gives a lot of room for character development, and Boyce does a good job with it. Fresh off the heels of everything that happened last week, Bill is still trying to wrap her head around the Doctor and who he is and what he does. In Smile, she gets to see him at work in his natural element as he tries to solve the mystery. She starts to see him less as the eccentric professor and more as an intergalactic policeman (which leads to some more funny banter about the TARDIS being in the shape of a police box; it’s actually a sweet moment.)

In terms of plot, Smile – like The Pilot – doesn’t really have a complex plot. And like The Pilot, this works to Smile‘s advantage. The simplistic plot allows the space for the character moments and the tension that the “monsters” bring to happen. Director Lawrence Gogh really handles tension well, with the assistance of his post-production crew. Of particular note is the sound design. This week’s bad guys feature a lot of sound elements – the microbots fly around the air like bees – and having smart sound design can really build the tension as you hear the buzzing but you can’t actually see the threat. Things are always more intimidating when you can’t see them, and Gogh and his team are able to succeed very well in this regard.

The Vardy attack a woman

The other big thing I liked about this episode is that the monsters weren’t really monsters, nor were they really bad. The Vardy (the microbots) were designed to make people happy; that was their primary function. Like all good science fiction stories, this all goes horribly wrong. But it’s not that the Vardy actually want to kill people; they’ve detected grief for the first time. A woman dies a natural death and it’s the first time the Vardy have seen death and seen how it affects that person’s loved ones. So, the Vardy interpret death as the opposite of happiness: a plague that must be eradicated. And the only way they seem to be able to eradicate it is by killing anybody who “hosts” it.

But the idea of the Vardy not being malevolent is clever. I always like it when science fiction shows shades of gray in its villains. The Vardy just think differently than humans; they think they’re doing their job. People must be happy. They just don’t understand that the way they’re going about it is horrific and leads to more unhappiness which leads to a massacre. It’s an interesting dilemma and how the Doctor ultimately solves it is the way Twelve likes to solve things: negotiate. Sure, there’s the return of the sonic screwdriver being able to do pretty much anything that’s needed – essentially making it a magic wand – but the end game is a negotiation between the humans and the Vardy. Nobody has to die as long as people can understand each other. 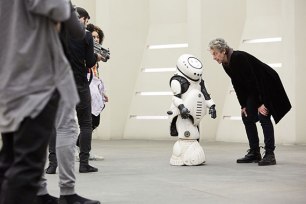 The Doctor negotiates with the Vardy

That seems particularly poignant right now. Differing viewpoints and ideas do not make us enemies. It’s one thing if someone’s ideas are literally making someone less of a human or taking their rights away – that’s a whole different ballgame. But in general, seeing things differently should not be a bad thing. Negotiation and understanding are always needed, from all parties. Not just politically, but in general. And I liked that Doctor Who sort of touched on this in its fun, science fiction way.

Back to the episode itself: Peter and Pearl were excellent, again. Like last week, Pearl really shines in this episode as Bill. She continues to deliver a layered, nuanced performance that really makes Bill feel like a three-dimensional character. I just love how “normal” Bill is. I love that she feels like someone you’d randomly meet. She has her hobbies and she’s a dork about science fiction and she’s independent and vulnerable and I adore the way she reacts to the extraordinary aspects of the adventures she’s having with the Doctor. I just think the writing team is doing a really good job with Bill so far, and Pearl is doing an even better job portraying her.

The music in this episode wasn’t memorable, but I think that’s for the best. It means it wasn’t distracting, and an episode like this really doesn’t need music to distract you from the tension that’s been naturally built by the excellent cinematography and direction. The pacing is perfect; it has that classic slow burn where you notice something’s not right but you can’t figure out what it is and then slowly things get worse and creepier and then it collides in a climactic finale. It was good.

This was another strong episode with an ending that leads right into next week’s episode (another thing I like; Smile told its own complete story but the very last scene of the episode leads into the next. It gives the show a sense of continuity while also letting the episodes stand alone. When you watch them back to back, you get the feeling of it all being connected, but you can still watch them separately and miss an episode here or there and be a-okay. It’s smart.)

I give Smile 4 out of 5 wands. It wasn’t perfect, it’s not gonna be anybody’s favorite episode of Doctor Who. But it was very good and very enjoyable and continues to keep the bar set high for the remainder of the season.

Doctor Who continues next week at 7:20pm on BBC One and at 9:00pm EDT on BBC America.