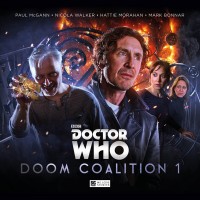 Not to be rude to Dark Eyes, but man I am in love with the premise Doom Coalition. Partially because I just really love anything to do with the Time Lords and Gallifrey, and since the Eleven (Mark Bonar) is a really messed up Time Lord, he’s far more up my alley than the array of Daleks that Dark Eyes featured. Unfortunately, however, the box set really fails to live up to the high expectations its premise (and first episode) set for it. Written by Matt Fitton, John Dorney, Marc Platt, and Edward Collier and directed by Ken Bentley, Doom Coalition 1 follows the Doctor (Paul McGann) and Liv Chenka (Nicola Walker) as they track down an escaped Time Lord criminal known as the Eleven, a Time Lord with some kind of genetic defect that causes him to retain the personalities of all eleven of his bodies. Their journey takes them through time and space as they must stop the Eleven from succeeding in his evil plan. (Spoilers follow.) 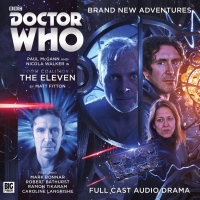 Part 1: The Eleven (by Matt Fitton)
Doom Coalition 1 starts off with an extremely strong episode set on Gallifrey. It opens with the Seventh Doctor (Sylvester McCoy) and the Eleven having a conversation and ends with the Eighth Doctor and the Eleven having a conversation. In between those conversations is lots of intrigue, suspense, death, and destruction. From the Big Finish website: “The Eleven. A Time Lord whose previous personalities live on in his mind: arguing, plotting, jostling for supremacy… He is also Gallifrey’s most dangerous criminal. And he has escaped. The Doctor is recalled to his homeworld to lead the hunt. As they search the Capitol’s corridors of power, the Academy halls and the cells of the highest security penitentiary, Liv realizes the worst monsters may be among the Doctor’s own people. For inside his fractured mind, the Eleven has a plan. And its deadly consequences will extend through space and time…”

I just really adored this episode. It’s the strongest opening of any of the Eighth Doctor’s box sets so far. I found the plot so much more interesting, particularly because of the fact that the villain, the Eleven, is such an unknown commodity to me and is actually interesting and nuanced (unlike the Dalek Time Controller, who was, at least, more nuanced than a regular Dalek but still fairly two dimensional). Add to that some spectacular performances from the guest cast and another staggeringly scary dose of angry Eighth Doctor from Paul McGann and you have a really enticing and interesting episode of Doctor Who. The plot was so well paced and constructed; it felt like a complete episode while also feeling like the first part in a series of four. It perfectly set up the rest of the box set while also explaining the Eleven’s motivations and enough of his plan to make sense of it. Plus the Eleven is just… so dark and evil that it’s hard not to relish him as a villain. (5 out of 5 wands) 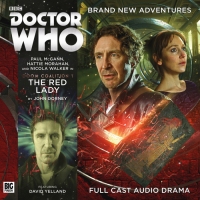 Part 2: The Red Lady (by John Dorney)
For some reason, the next two episodes of the box set have barely anything to do with the main plotline. Instead, they feel like monster-of-the-week episodes, which feels really off in a box set of this kind. Ideally, you’d want each episode to build up to a finale, and it really doesn’t happen. At least this episode is a good monster-of-the-week episode. From the Big Finish website: “An anomaly in time brings the Doctor and Liv to London in the 1960s, where they meet a young lady named Helen Sinclair (Hattie Morahan) — desperately trying to make a name for herself in the face of sexism and prejudice. Whilst the Doctor tried to uncover the secrets of a mysterious artifact, a far deadlier mystery awaits Liv and Helen in the collection of a recently deceased antiquarian. Because that’s where they find the Red Lady. Because if you do, you might not like what you see.”

I really dislike that this episode doesn’t really continue any of the threads left hanging from the last episode. It’s a missed opportunity and drains the box set of a lot of the narrative tension that it had built up in that first episode. That being said, this is still a very enjoyable episode, helped immensely by the introduction of Hellen Sinclair, played by the magnificent Hattie Morahan. The plot of the episode revolves around her, and as she’s a language specialist for a museum, it creates a rather interesting and distinct plotline for Doctor Who. It ends up being lots of fun and the introduction of Hellen as a new companion was a great one. The writing was strong and the episode was structured well and acted superbly. I wish it had tied in with the overall storyline a bit more, but I’m glad I got a good episode, nonetheless, especially compared to what comes next. (4 out of 5 wands) 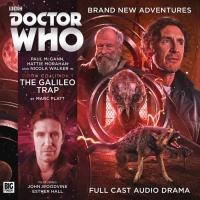 Part 3: The Galileo Trap (by Marc Platt)
Too bad this box set couldn’t stay good. Not only does this episode barely tie into the overall storyline (it does in a sort of superficial way), it’s not even a good story. The villains are bland, the pacing is awful, even the sound design isn’t as strong as it usually is. From the Big Finish website: “Helen Sinclair doesn’t know what hit her. One moment she was trapped in a dead-end job in 1960s London, and now she is transported back to Renaissance Italy over three centuries before. Florence is a city in turmoil. A new plague stalks the streets. A ferocious behemoth rampages through the vineyards. And Galileo Galilei – celebrated scientist, astronomer and old friend of the Doctor – is imprisoned in his own villa for heresy. But why has Galileo summoned the Doctor? Who are the mysterious Fortuna and Cleaver? Why have they been sent to Earth? And what is Galileo’s secret? Is it the last thing he saw before he went blind?”

I’m trying very hard not to bash this episode, but I really really didn’t like it. The plot was nonsense, the villains weren’t at all interesting (and it was immediately obvious who they were working for, and not in a good way), and the writing itself wasn’t very good. It tried hard, and I do appreciate that. But it just wasn’t good. Not even Paul McGann, Nicola Walker, and Hattie Morahan could save this episode. It brings everything to a tedious halt. It tries to propel the main story forward, but it ultimately fails and proves itself to be nothing but fluff. The Doctor and co could easily have gotten to the point they got to by the end of the episode without any of the events of the episode happening. There wasn’t any real character development nor was there any real consequences in the story. It was just bad. (1 out of 5 wands) 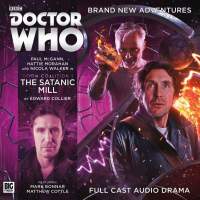 Part 4: The Satanic Mill (by Edward Collier)
Well, at least this story is better than the last one was, though it doesn’t really quite succeed at being a satisfying conclusion to the box set. From the Big Finish website: “The Satanic Mill – a vast Victorian factory floating in the deep of space. As the Doctor closes in on his quarry, long buried animosities come boiling to the surface on this ancient and powerful satellite, in a final confrontation that could have unimaginable consequences. And even that is only the beginning…” The episode is really slow for about the first half, which is frustrating. It takes a while for anything to happen, and after two episodes of nothing really happening, it’s just tedious again. But, thankfully, once things start happening, they don’t really stop. That being said, this finale did a poor job at wrapping up any of the loose threads left dangling from the first episode. It does raise new questions, though, but doesn’t really answer any of the previously asked ones.

Aside from my problems with the writing, it’s a fairly well put together episode. The acting is, as always, top notch and the direction and sound design are back to the quality we’ve come to expect from Big Finish. I really love Hellen’s character and I’m glad she’s been introduced to the TARDIS crew. Her repertoire with Liv is enjoyable to listen to and I’m glad the two of them have as much time together as they do. The Eleven is utilized competently here, but not as effectively as he was in his first appearance, which is a shame. The potential in him as a villain is strong and it’s so disappointing that the execution of this box set was so hit or miss. That being said, this episode is still enjoyable enough, if ultimately unsatisfying. (3 out of 5 wands)

Doom Coalition 1 is an incredibly mixed bag. It opens with one of the best Eighth Doctor audio stories and then proceeds to plummet into a mixture of mediocrity and downright dreadful. It’s a shame that they squandered such a promising premise with dreadful execution. At this point, the only thing I’m looking forward to in Doom Coalition 2 is the appearance of River Song. Hopefully that box set can win me back over with its plot as well, but I’m not exactly holding my breath. It’s a shame since Dark Eyes was, on the whole, fairly solid and consistent. It’s never a great sign when your opening installment stutters its way into existence. I hope the latter three box sets can make up for this.