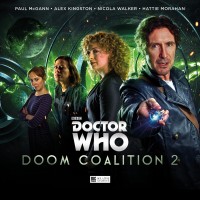 Well, this one’s an improvement over the last one, that’s for sure. While still a bit too monster/case-of-the-week for my tastes, at least all of the stories are well written. In Doom Coalition 2, the Doctor (Paul McGann), Liv Chenka (Nicola Walker), and Helen Sinclair (Hattie Morahan) continue their search through time and space for the Eleven (Mark Bonnar), a Time Lord criminal with a disorder that causes him to retain the personalities of all of his previous regenerations. On their journey, they encounter another Time Lord, Caleera (Emma Cunniffe), who is equally messed up as the Eleven is. The Doctor and friends must stop Caleera from using her psychic powers to destroy the universe. During their journey, they encounter the Voord, brainwashed Time Lords, an odd “gift” sweeping through the residents of 1906 San Francisco, and none other than the Doctor’s wife herself, River Song (Alex Kingston). Can the Doctor, Liv, Helen, and River stop the Eleven and Caleera from causing irreparable harm to the universe? (Spoilers follow.) 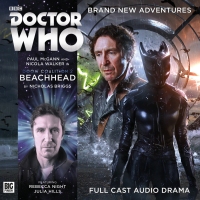 Part 1: Beachhead (by Nicholas Briggs)
This is probably my least favorite story of the bunch. It’s not bad or anything, it’s just got the least to do with the overall plotline. From the Big Finish website: “In an attempt to recharge his batteries after his confrontation with the Eleven, the Doctor takes Liv and Helen to the sleepy English seaside village of Stegmoor. But they find the village in turmoil and, to make matters worse, their arrival uncovers a mystery from the Doctor’s past which threatens the future safety of the planet. Can the Doctor prevent the Voord from invading Earth? And more importantly why have they come in the first place?” This episode feels more like the kind of bottle episode you’d find halfway through a season of a TV show. It’s good enough, but it’s totally a filler episode.

It’s a fairly well-written episode, actually. A really poor box set opener, though. I appreciate the purpose it serves in the overall scheme of the entire series, but it’s such a weird way to begin a box set of four connected stories. The episode doesn’t introduce the box set’s central villain, it doesn’t further along any of the plot threads left dangling from the previous box set, and it barely ties into things at all. I really don’t understand why it was selected as the opening story for Doom Coalition 2 other than there was a passing reference at the end of Doo Coalition 1 to the Doctor owing Liv and Helen a vacation after all the danger and trauma they were put through in that box set. All of that aside, it’s enjoyable enough. The plot gets moving fairly quickly, the supporting characters are developed enough so as not to feel annoying and actually have some kind of impact on the story itself. All the actors do a fine job and if it weren’t part of a box set, it’d honestly get a higher grade from me. It feels like something you’d have expected in the Eighth Doctor Adventures line, which isn’t bad, but it’s not what I wanted from the opening story of a box set. (3 out of 5 wands) 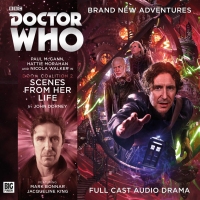 Part 2: Scenes From Her Life (by John Dorney)
This is the episode that should’ve begun the box set. It’s a tense, gripping thriller that introduces us expertly to this box set’s central villain while also defying any expectations the listener may have had for it. From the Big Finish website: “Investigating the appearance of the Voord on Earth, the Doctor, Liv and Helen follow a trail which takes them to the other side of the universe. There they discover a mysterious and almost deserted gothic city lost in space and time, in which the grotesque inhabitants are conducting a vile and inhumane experiment. The Doctor and his companions must hurry to save the lives of those in danger before the experiment succeeds a success and the unimaginable consequences become all too real.” I only have one real complaint about this episode and that’s the fact that the two main supporting characters, Stormblood (Vincent Franklin) and Sepulchra (Jacqueline King) are annoying as hell. They’re written well enough, but for some reason, either the actors or the director decided to give them the most obnoxious and annoying voices I have heard in a long time. The characters are supposed to be somewhat sympathetic but every time they speak I just want to punch them in the face. It’s really frustrating and took me so far out of the story that it took me several tries to successfully finish it.

That annoyance aside, it’s really a great episode. It introduces us to our main villain for the set, Caleera, a Time Lady whose unusual psychic abilities were suppressed by her tutors and supervisors on Gallifrey. She makes for an interesting villain in the same way that the Eleven does. She’s a Time Lord with an ax to grind against both Gallifrey and her fellow species. What’s clever about this story is the way the character is introduced. It’s done in a nonlinear way, her backstory woven together with the events of the episode taking place in the “present” day. It’s a nice way of foreshadowing the reveal towards the end of the episode about her character and I really appreciated how it was executed. (4 out of 5 wands). 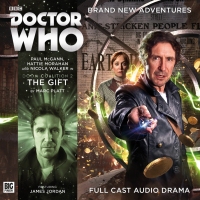 Part 3: The Gift (by Marc Platt)
This episode is fine. It’s not bad, but it’s not one of my favorites either. At first, it seems unrelated to the main plot, but by the time the episode ends, the finale is set up in a really interesting way. From the Big Finish website: “The TARDIS deposits its crew on Earth in San Francisco, 1906. There they find an actor-manager desperate to stage his definitive production of King Lear. But a real storm is headed their way when he becomes the possessor of a mysterious psychic ‘Gift’ which is hungry for power and intent on wreaking havoc and destruction. But exposure to so much psychic activity has the Doctor becoming increasingly erratic. Can he battle his demons and save the world?” This one’s an oddity in the box set. It is sort of mediocre, but there’s a lot of individual elements that I liked. I think the setting was really smart and a great way to introduce the mystery of the episode. Many of the characters were unique and interesting, partially because of the performances their respective voice actors gave. And the ending really does set up the finale rather well.

My problems with the episode boil down to its pacing. It just takes forever for things to really get going, especially since Caleera’s involvement isn’t revealed until the end of the episode. So for much of it, it feels like another filler episode, and we’ve already discussed my displeasure for filler episodes in these four-interconnected-episode box sets. So that aspect of the episode really hinders my enjoyment factor a bit. All that being said, though, I did enjoy it. The acting, in particular, was superb in this episode, especially from the supporting cast. The fact that Caleera was behind everything and was manipulating the Doctor toward beginning her final plan was a really interesting one and set up a number of elements for the finale. And that cliffhanger at the end of the episode was just top notch. (3.5 out of 5 wands) 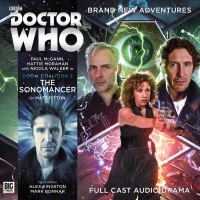 Part 4: The Sonomancer (by Matt Fitton)
And here we are at the finale, and it’s definitely a good one. Like the previous episode, it takes a while for the ball to get moving, but once it takes off, it’s a roller coaster that ends really well. From the Big Finish website: “On the other side of the galaxy a mining company is exploiting the already unstable planet of Syra for every precious mineral it contains. River Song is attempting to save the native people. She needs the Doctor’s help, but she also knows he mustn’t yet discover her true identity. The final confrontation sees the Doctor once again face his enemy the Eleven in an attempt to prevent the destruction of Syra and the genocide of its inhabitants.” I love River’s inclusion in this episode, and in the series in general. River is one of my favorite additions that Steven Moffat made to the Doctor Who universe and I always love when she’s in a story, and this is no exception. She’s used really well in this story, being both the catalyst for it happening at all and a key factor in its climax.

The episode’s runtime is definitely padded a bit. About fifteen minutes, or so, could probably have been cut and the story would be better for it. As it is, the story takes a while to get going, and that first half hour is a bit tedious, but the second half hour is just superb. Helen and River have a really interesting connection and I adore the scenes they shared together and the way the two characters quickly bonded with one another. I also love how Liv was utilized in the story, going off on her own (of her own accord) in order to actually try and help/solve the situation and face off against the Eleven was really interesting. It’s actually kind of funny how little the Doctor is in this story. It’s really River, Helen, and Liv’s story, and I’m totally okay with that. The way that the Eleven and Caleera had teamed up was a really smart way to use both villains and it seems that it might be hinting at something even bigger that’s moving the whole series along… (4.5 out of 5 wands)

Doom Coalition 2 is a definite improvement over the first entry in the series. With tightly written stories, superb performances, solid directing, and an overall enjoyable tone, it’s a great four episodes of Doctor Who. I like the direction the series is heading and I really love the central villains of the series so far. I wish they were in more episodes, but when they’re in an episode, they’re suitably interesting, threatening, and great. The episodes themselves varied a bit in quality and relevance to the main plotline, which sucks a little bit. I’d prefer it if all the story were directly tied into the main plot of the box set, like most of the episodes of the Dark Eyes series were, but that nitpick aside, the episodes are a whole lot more enjoyable on average than the ones in Doom Coalition 1 were. Overall, it’s a solid entry in the series and the finale really has me pumped for the next box set (which appears to feature a whole lot more River Song in it.) (4 out of 5 wands)