We finally have a title for the second film in the Fantastic Beasts series: Fantastic Beasts: The Crimes of Grindelwald. That, alone, is a lot to unpack. But Warner Brothers marketing, never being one to skimp out on goodies for fans, also unveiled a new promo image for the film featuring our first look at the new and returning characters! And, oh boy, it’s a doozy. I wish WB had released a trailer today (it would have made smart marketing sense; Justice League, another WB film, releases in theaters this weekend and it would only make sense for WB to attach the trailer for next year’s blockbuster for the studio with this year’s blockbuster for the studio, but, alas, I do not head the marketing team). Either way, finally having a title and a first look at the cast is a really nice thing and I’m eager to break it all down. 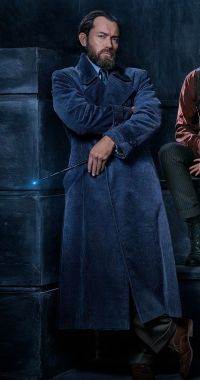 The promo picture of the cast has a lot of really fun clues in it, so let’s break it down bit by bit. First up is Jude Law as Albus Dumbledore. This is our first look at his portrayal of the character, and I have some mixed feelings. I understand that his Dumbledore is far younger than the one we’re used to seeing, but I just feel like he looks too… serious. The outfit is so “regular” and his posture is one of serious determination (compared to Grindelwald’s posture; I’d have imagined the two postures switched with each other, but it is interesting as is). It’s also interesting to see confirmation that the second wand in the picture we saw yesterday from the Fantastic Beasts Twitter Account is actually Dumbledore’s wand from before he got the Elder Wand (in this promo pic, we can see that Grindelwald has the Elder Wand, meaning he’s stolen it from Gregorovitch already; more on that soon). It’s hard and unfair to the actor to make a judgment on their portrayal of a character based solely on a promotional picture, so I withhold all judgment on Law’s portrayal of Dumbledore. He’s a great actor and I’ve very excited to see what he does with the role, it’s just that this picture doesn’t quite feel very… Dumbledore-ish. But perhaps that’s on purpose. 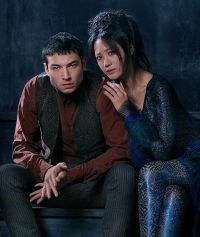 Next up are Ezra Miller’s Credence and Claudia Kim’s still unnamed character. It’s been confirmed since filming began on Fantastic Beasts: The Crimes of Grindelwald that Credence would be returning in some way. It’s been largely rumored that his story would be connected with that of the Magical Circus run by Skender – played by Ólafur Darri Ólafsson. This promo picture seems to confirm that as he’s seated very closely with Claudia Kim’s still-unnamed character, one of the main attractions of the Wizarding Circus and a Maledictus (a carrier of a blood curse that makes her transform into a beast; probably the reason she’s part of the circus). The big question is how did Credence survive? Well, we know from interviews the crew gave during the release of the first film that there was a scene that was cut from the end of the film that showed Credence getting on the same boat that Newt leaves New York on. And the official screenplay that was published mentions a whisp of the Obscurus rising away from the aftermath of MACUSA essentially exploding Credence. The question I most want to be answered is how Credence becomes involved with the circus. During the time period, circuses and carnivals and freak shows were not known for being particularly nice to those who “worked” in them, so it’s interesting to see Credence associated with it after the number of times he was referred to as a freak in the first film. Does he find solace in the other circus acts? Or will all of this cause his power to surge out of control again? 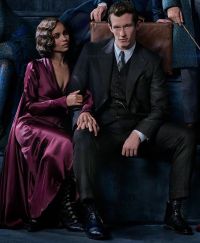 Up next are Zoë Kravitz’s Leta Lestrange and Callum Turner’s Theseus Scamander. Both of these characters have interesting connections to Newt. Theseus is Newt’s older brother – a war hero and well-respected Auror. Essentially, Theseus is everything that Newt isn’t, but there does still seem to be some love there between the two of them. Leta Lestrange is an old school friend of Newt’s (who he possibly was in love with). She is the reason he was expelled (or almost expelled) from Hogwarts (it’s not quite clear if Newt was actually expelled; some of the tie-in material suggest it was a proposed expulsion, but Dumbledore was able to keep it from being enforced, which is why Newt still has his wand). In The Crimes of Grindelwald, Leta and Theseus are engaged to each other, an extremely interesting development. How will Newt react to his brother being engaged to his former friend – who he nearly got expelled from Hogwarts over after he protected her from getting expelled from Hogwarts). Is Leta playing a long game or does she truly love Theseus?

Behind Theseus and Leta, stand Newt and Tina. The first film began to lay the groundwork for Newt and Tina’s future relationship (it’s established canon in J.K. Rowling’s Wizarding World that Newt and Tina are married), and to have them standing directly behind Leta and Theseus is a really fun choice. Leta is Newt’s old love who is now in love with his brother and Tina is Newt’s new love interest (as well as an accomplished Auror and a well-developed character) and by having the four of them grouped together, the promo picture seems to be suggesting that this will play an important role in the film. There’s not much else to really dig into in regards to these two. Newt’s posture is interesting; he seems far more confident than he usually is, perhaps because he’s now a well-known name after the publication of his book about beasts, Fantastic Beasts and Where to Find Them. The other thing I noticed is that Newt’s case doesn’t seem to have the twine on it anymore… I hope this doesn’t mean some beasts are gonna escape from it again. I really don’t need a repeat of that aspect of the first film.

As always, it’s a joy to see Alison Sudol’s Queenie and Dan Fogler’s Jacob together. There’s not a whole lot that can be gleaned from this image other than the fact that both of them are, indeed, in the movie. I’d assume that at some point, Jacob regains at least some of the memories he lost at the end of the first Fantastic Beasts film, but I’m interested in how he gets tangled up in the plotline of this film. Does Queenie and Jacob’s storyline pick up very shortly from that last shot of the first film? Does seeing her again his bakery jog his memory? So many questions and no answers. I’m just glad they’re both in the film, and I’m really digging Queenie’s outfit here. As always, it just feels so perfectly 1920s, especially with the shoes and that bow design on the chest of her dress. I dunno how big a role the two of them will play in The Crimes of Grindelwald, but I’m always excited for more of them; they were both so endearing in the first film. 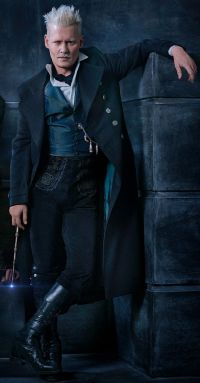 Last, but not least, we have Johnny Depp’s Gellert Grindelwald. This is our first true look at the character as we only saw him briefly in the first movie (in Graves’ costume), so this is our first look at Grindelwald’s costume. I really dig it. It feels like something a madman would wear. I like his hair far more in this picture than I did in the first film, and the ridiculous mustache doesn’t quite feel so ridiculous here. I find that string of… teeth? he’s wearing to be interesting. They look like they’re the teeth of beasts. At first thought, one might think it’s just the costume designer trying to make sure the audience understands that Grindelwald is evil and ~edgy~, but I think it goes deeper than that. Grindelwald is known in the Wizarding World as one of the worst Wizard terrorists ever. With the visual look they’ve given the character (particularly in the face), I can see Grindelwald being crazy enough to torture beasts in addition to torturing people. He’s just…evil and crazy and it shows clearly in this picture. The other interesting thing is that he clearly has the Elder Wand here. In the first film, he was using Graves’ wand (as he was in disguise as MACUSA Auror Percival Graves). What intrigues me is that Tina and/or Newt (I don’t remember which) disarmed him in the previous movie. According to the lore of the Elder Wand, the wand changes allegiance to the person who bests the current owner of the wand. Most wizards had assumed that meant that the current owner had to be killed (and Grindelwald probably subscribed to that belief), but as we learned in Harry Potter and the Deathly Hallows, the wand will change allegiance even if its previous owner was merely disarmed. So, if Grindelwald had ownership of the Elder Wand during the first film, does that mean that Newt or Tina is now the rightful owner of the Wand? Will it work properly for Grindelwald or will it malfunction like it did for Voldemort? Will this be a major factor in Dumbledore and Grindelwald’s climactic showdown in 1945 (rumored to be happening later in the film series)? Could this be why Grindelwald says to Newt “Will we die just a little?” as he’s being led away at the end of the first movie? Does Grindelwald know that Newt is now the master of the Elder Wand and intends to kill him to regain its allegiance? So many questions and so many places the film could go.

Lastly, let’s talk about the title of the film: The Crimes of Grindelwald. It’s great that the title seems to imply a much greater focus on the darker elements of the story. My biggest problem with the first film was how so much of it was focused on the “gotta-catch-’em-all” aspect of Newt and friends needing to find the beasts. I understand why it needed to be there and I am very glad it allowed the first film to give us the amazing character development between the four leads (Newt (Eddie Redmayne), Tina (Katherine Waterston), Queenie (Alison Sudol), and Jacob (Dan Fogler)) we ended up getting, but all the scenes of the four of them trying to capture the beasts were my least favorite in the film. I liked the storyline around Credence (Ezra Miller) and Graves (Collin Farrell) far more than the beast catching plot and will always wish we’d been able to focus more on the Second Salemers, MACUSA’s search for Grindelwald (Johnny Depp), and the Shaw Family subplots. So, that being said, I’m glad that it seems like the beasts are taking a back seat in this new film. We know there’s a magical circus (more on that in a moment), so I’d be totally fine if the beasts only ever appeared in coordination with the circus.

Today’s announcement of the title of the Fantastic Beasts sequel and the release of the first promo image has given us all a lot to talk about. I’m excited to see more from the film and excited to see the speculation around the film grow as well.

Fantastic Beasts: The Crimes of Grindelwald opens in theatres in exactly one year, November 16, 2018.