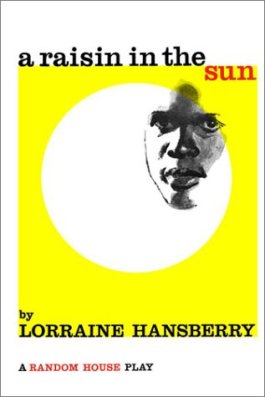 *NOTE: THIS IS A REVIEW OF THE SCRIPT, ONLY*
As part of my Directing class in school, I’ve had to some plays in preparation for the scene work that’s to come later in the semester. One of those plays was Lorraine Hansberry’s classic A Raisin in the Sun. Nominated for four Tony Awards – including Best New Play, A Raisin in the Sun details the lives of the Younger family, an African American family living in Chicago in the 1950s. Set on Chicago’s South Side, the plot revolves around the divergent dreams and conflicts within three generations of the Younger family: son Walter Lee, his wife Ruth, his sister Beneatha, his son Travis and matriarch Lena, called Mama. When her deceased husband’s insurance money comes through, Mama dreams of moving to a new home and a better neighborhood in Chicago. Walter Lee, a chauffeur, has other plans, however: buying a liquor store and being his own man. Beneatha dreams of medical school. The tensions and prejudice they face form this seminal American drama. Sacrifice, trust, and love among the Younger family and their heroic struggle to retain dignity in a harsh and changing world is a searing and timeless document of hope and inspiration.

First, I want to talk about the positives. A Raisin in the Sun truly is a moving play. It’s honestly one of the best examples of how good American theatre can be. It’s expertly paced, each act ending with a crescendo that begs the audience to come back after the intermission. The characters are well-written, if frequently unlikable – though that’s sort of the point. These are all flawed characters and I appreciate just how well developed each of them is. It’s interesting how even though this play was written and set in the 1960s, its subject matter is still so relevant and applicable to today’s society. If you didn’t know any better, this play could’ve been written and been placed in 2017. This play has won countless awards over the years, and it definitely deserves it. It truly is an amazing play, regardless of the issues with the script I’m about to talk about.

I have a feeling that this play is one that’s much better seen than read. Like I said, it’s truly a good play, but the actual script itself leaves something to be desired. There’s something so daunting and annoying about a script that has to spell every action out in its stage directions. At no point do I as a reader of plays, or a theatrical artist, need to know every little movement the characters do (and have their reasoning spelled out for me) or have every minute detail of the set told to me. Some of that should be left for the production team of every production to decide (as is the case anyway since frequently, directors ignore stage directions in scripts even if there are barely any, to begin with). I recognize that this may just be a personal preference of mine as a Theatre artist and playwright, but it’s just a pet peeve of mine when it comes to some scripts. This seems to be a thing that many modern plays have moved away from doing, thankfully. As a result, the scripts of many a classic play are bogged down with unnessecary stage direction.

For me, if the stage directions were just edited down to the bare necessities for a reader to understand the action instead of the endless, constant interruptions describing the minute details of the set and the meaning behind every action – as though the reader, actor, and director can’t make those inferences without it being spelled out for them, then this script would be a lot better. I think it’s probably unfair to judge this play by its script. If this were a novel, the amount of detail in the descriptions would be great. As a script, it detracts from the experience of reading it. Watching it, however, probably rectifies those problems since the action doesn’t stop to explain the set or detail the actions that a viewer can plainly see. My issues with the script boil down to how the detailed stage directions take away from the momentum of the story since the dialogue is what thrusts the story forward and every time you have to stop to read a paragraph of stage directions kills that momentum. But watching a play is different since the stage directions are just acted out. The momentum is there because all the action is happening while the lines are being said instead of having to be read in between lines.

All in all, it’s a brilliant play with a script that’s a drag to read but, most likely, a true delight to actually see performed. I won’t know for sure until I see the production of it that is happening here in Greensboro later this spring, but I suspect seeing the play will highlight all the truly good aspects of it. Such is the case for many a play with a script full of too much stage direction. As a result of my displeasure with the script itself, I’d recommend seeing a performance of A Raisin in the Sun rather than reading the script, but if you have no choice, the script will do. It’s a good, enjoyable, and important story that’s worth experiencing in whatever way you can experience it in.