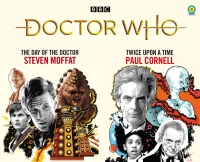 Back in the 1970s, ’80s, and ’90s, nearly every serial from the classic run of Doctor Who was novelized in one way or another through a range of books published by Target Books. That practice was discontinued when the show returned in 2005, mainly due to how readily available various home video formats were. It’s a shame because many of those classic novelizations ended up being better than the televised versions (mainly because a novel doesn’t have the budget constraints of a science fiction show made on a shoestring budget in the mid-1970s). Then, just a few months ago, BBC Books decided to revive the range for a brief five-book run. Like the old range, they brought back the writers of some of the episodes while mixing it adaptations from other writers. The books adapted for this new range were Rose by Russell T. Davies (the writer of the episode), The Christmas Invasion by Jenny T. Colgan (based on a script by Russell T. Davies), The Day of the Doctor by Steven Moffat (the writer of the episode), and Twice Upon a Time by Paul Cornell (based on a script by Steven Moffat). This review, however, will be focusing on the latter two books: The Day of the Doctor and Twice Upon a Time.

Doctor Who: Day of the Doctor (by Steven Moffat): When the entire universe is at stake, three different Doctors will unite to save it. The Tenth Doctor is hunting shape-shifting Zygons in Elizabethan England. The Eleventh is investigating a rift in space-time in the present day. And one other – the man they used to be but never speak of – is fighting the Daleks in the darkest days of the Time War. Driven by demons and despair, this battle-scarred Doctor is set to take a devastating decision that will threaten the survival of the entire universe… a decision that not even a Time Lord can take alone. On this day, the Doctor’s different incarnations will come together to save the Earth… to save the universe… and to save his soul.

Doctor Who: Twice Upon a Time (by Paul Cornell): Still reeling from his encounter with the Cybermen, the First Doctor stumbles through the bitter Antarctic wind, resisting the approaching regeneration with all his strength. But as he fights his way through the snowdrifts, he comes across the familiar shape of a blue police box, and a mysterious figure who introduces himself as the Doctor… Thrown together at their most vulnerable moments, the two Doctors must discover why the snowflakes are suspended in the sky, why a First World War Captain has been lifted from his time stream moments before his death, and who is the mysterious Glass Woman who knows their true name. The Doctor is reunited with Bill, but is she all she seems? And can he hold out against the coming regeneration? 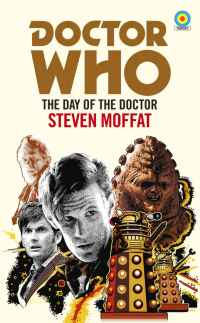 Doctor Who: The Day of the Doctor (by Steven Moffat)
Steven Moffat should absolutely consider novelizing more of his episodes if the BBC decides to do more of these. This book brilliantly expands on all the best parts of the episodes while filling in gaps that weren’t able to be filled in in the episode itself. There are so many unexpected elements of this book that I don’t wanna go into any detail about them for fear of ruining the fun. Needless to say, if you loved the episode, you’ll love the book. And the best part is that it’s still a surprising book even if you’ve seen the episode one hundred times. It begins with an adaptation of the 8th Doctor mini-episode, Night of the Doctor, and that’s everything you’d ever hoped it would be, and continues from there, more or less following the sequence of events as they happened in the episode, while adding lots of new details here and there as appropriate. There are many, many little moments that Moffat sprinkles throughout this adaptation that really adds to the magic of the episode, especially towards the end when the multiple incarnations of the Doctor come together to save Gallifrey.

Moffat plays with point of view a lot in this book and uses the fact that it’s a multi-Doctor story to his advantage when it comes to exploring the Doctor’s thoughts in regards to the action happening around him. There’s a chapter, about midway through the book, where the 10th Doctor, 11th Doctor, and War Doctor are being transported to the London Tower and the chapter really goes into how it feels for the Doctor to be experiencing the same events, over and over again, throughout these three incarnations. This exploration comes to a head in a later chapter that covers the events inside the prison cell where the multiple incarnations of the Doctor confront themselves over how many children were on Gallifrey when it was destroyed. It’s a beautiful moment in the show that’s made even more beautiful by the way Moffat uses the prose to explore the thoughts and feelings of each of these three Doctors and how it feels to know what’s about to happen and having to feel the pain of the realization over and over again. My words don’t do the beauty of the chapter justice.

Like many of Moffat’s best episodes, this adaptation of The Day of the Doctor features many timey-wimey elements, least of which being the fact that the chapters aren’t at all in the correct order (the first chapter of the book is actually Chapter 8, and they continue to be out of order for the remainder of the book). There’s a reason for all of this, of course, but it still feels very Moffat-y. The action jumps around from scene to scene and features lots of added scenes and asides to flesh out the book, and it’s all narrated by a rather surprising narrator. At the end of the day, if you liked the episode, you’ll love the novel even more. It’s Moffat at his best. 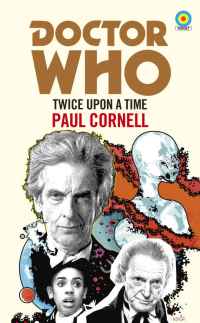 Doctor Who: Twice Upon a Time (by Paul Cornell)
While Twice Upon a Time is a far more straightforward adaptation of its episode when compared to Moffat’s adaptation of Day of the Doctor, it is no less enjoyable. Paul Cornell has always had a gift for strong prose, and that strong prose is very much on display in his adaptation of Twice Upon a Time. In a way, it feels like he, out of all the authors, is trying the hardest to replicate the classic style of the original Target novelizations. Honestly, though, it really works for this story, mainly because of the fact that it heavily features the First Doctor, who Paul Cornell writes beautifully for. The episode was heavily criticized for its depiction of the First Doctor (essentially, simplifying him into a bit of a caricature of who he actually was, playing up the more sexist aspects of his character and downplaying some of the softer aspects), and while Paul Cornell doesn’t really shy away from what Moffat wrote in the script, he does contextualize it some as a result of the regeneration the First Doctor is fighting off for the entirety of the story. In general, Paul Cornell writes the First Doctor really beautifully, adding some lovely insights into his thoughts during the episode – in particular, there’s a touching reference during the scene where Bill first appears where the First Doctor briefly thinks that the person the Testimony is offering the Doctor in return for the Captain is Susan, his granddaughter, and when it turns out to be Bill, he’s briefly heartbroken. It’s such a short moment, but so utterly powerful.

As for the actual meat of the story, it’s mostly as you remember it playing out on screen. It’s been reported that upwards of thirty minutes of footage was cut from the episode, and while some of it does reappear in the novelization, most of it remains lost to the sands of time. What is added in Cornell’s adaptation really does help flesh out the story somewhat. While I really liked Twice Upon a Time as an epilogue for Peter Capaldi’s run as the Doctor, I know a lot of people thought it was a rather anti-climactic way for a Doctor to bow out, given that there ended up being no real threat and the episode was far more an introspective look at Capaldi’s run as a whole than a truly gripping adventure, and while the book doesn’t fix that, I think that the very nature of the medium of novels ends up being a better medium for this story. Novels are often more introspective, and so this super introspective story ends up working really well on the page; possibly even better than it worked on TV.

Don’t go into this adaptation of Twice Upon a Time expecting anything radically different from the televised episode. Don’t expect it to be the fabled director’s cut featuring all the deleted scenes. Go into it expecting to read essentially the same thing you saw on TV, but with some added insights from the characters (and expect to find out just what happened to Bill, Heather, and Nardole after The Doctor Falls; spoiler alert: Bill and Heather had a damn cute life together) and you’ll have a very enjoyable time. Paul Cornell proves with Twice Upon a Time why he’s such a beloved author in the Doctor Who universe. He has such a gift for perfectly capturing the voices of characters and embellishing the events in which he’s telling that he makes every Doctor Who story he writes really come off the page. It’s a much different beast to the adaptation of The Day of the Doctor, but no less enjoyable.

While these are the only two books in the new Target range that I’ve read, I really thoroughly enjoyed them. I prioritized these two mainly because I prefer the Moffat era to the Davies era, and so these were the novelizations I was most excited to read. That being said, I have recently started the adaptation of Rose, and it’s just as good as these two adaptations, and I’ve heard similarly good things in regards to The Christmas Invasion. It seems BBC Books has stumbled across a gold mine of great opportunities. I really hope they continue this range, maybe releasing a few books a year, and adapt more of the revived series’ episodes. I mean, how awesome would it be to read a Neil Gaiman-penned adaptation of one of the episodes he wrote? The possibilities are endless and it’s not like there’s a short supply of talent to help bring these episodes to life in this classic format. The audience is there and wanting, and if The Day of the Doctor and Twice Upon a Time are anything to go by, future adaptations of Doctor Who episodes could continue to be amazing. Bring it on, BBC Books. Bring it on.

2 thoughts on “The “Doctor Who: Target Collection” Bursts Back on the Scene With the Amazing “Day of the Doctor” and “Twice Upon a Time” Novelizations”