Doctor Who: Rose (by Russel T. Davies)
In a lair somewhere beneath central London, a malevolent alien intelligence is plotting the end of humanity. Shop window dummies that can move – and kill – are taking up key positions, ready to strike. Rose Tyler, an ordinary Londoner, is working her shift in a department store, unaware that this is the most important day of her life. She’s about to meet the only man who understands the true nature of the threat facing Earth, a stranger who will open her eyes to all the wonder and terror of the universe – a traveller in time and space known as the Doctor.

Doctor Who: The Christmas Invasion (by Jenny T. Colgan)
Earth is under attack by power-hungry aliens. This is no time for the Doctor to be out of action. When a British space probe is intercepted by a sinister alien vessel on the eve of Christmas, it marks the beginning of an audacious invasion of the Earth by the Sycorax – horrifying marauders from beyond the stars. Within hours, a third of humanity stands on the brink of death with not a single shot fired. Our planet needs a champion – but the Doctor is not fit for service. He’s just regenerated, delirious in a new body and a dressing gown. Forced into his battered shoes is his friend, Rose Tyler, a girl from a London council estate. Will she save the world from this nightmare before Christmas – or see it destroyed? 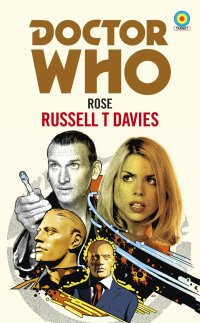 Doctor Who: Rose (by Russel T. Davies)
This novelization is probably, of the four, the one most different from the episode that aired. While Day of the Doctor added some new stuff, it was mostly just asides and rearranged scenes and things like that. With Rose, Russel T. Davies really takes the chance to do a total remix on his original episode, and I gotta say that I honestly prefer this novelization to the actual televised story. Where the TV version was filled with camp and cheap visual effects (mainly due to the budget and the expense of CGI in 2005), the novel feels a lot more realistic and a whole lot scarier. The climax of the novel differs greatly from what was aired. While, in the general sense, it plays out the same way; Autons attack London while Rose and the Doctor work together to defeat the Nestene Consciousness in a sewer beneath the London Eye, the details are radically different. The Auton attack is so much more violent in the novel. Like nearly horror movie levels of violence. There are beheadings, brutal murders, and lots and lots of fear. Things that could never have been shown on TV on a family drama in 2005. The novel really utilizes the Autons to their fullest and scariest effect, and the story is all the better for that.

Several characters get a lot more depth in the novel than they did in the TV version. The prologue is entirely dedicated to a character who was killed offscreen in the TV version; H.P. Wilson, the Chief Electrical Officer in the TV series is now Bernard Wilson, senior caretaker and the prologue gives him an entire backstory before he’s killed by the Autons. Mickey’s backstory is fleshed out immensely in the novel; it differs somewhat from his televised backstory, but it makes him a lot more sympathetic in the novel than he is in the televised story. Even Clive, the man Rose visits to find out more information about the Doctor, gets a more fleshed out backstory in the novel (and a more heroic death). All the characters feel a lot more three dimensional in the novel than they ever did in the televised story, and this novel really shows off Russel T. Davies’ ability for strong characterization.

Honestly, I just really preferred this novelization of Rose compared to the televised version. I think Russel T. Davies is able to improve on his original script in every way with this book. The characters are more dynamic, the Autons are far scarier, and the plot just works better. I wish this could’ve been the episode that brought Doctor Who back from the dead, but I know it would never have happened if it was as intense as this novel is. Rose really reminded me how good a writer Russel T. Davies is and how good he could be when writing Doctor Who. Too many of his episodes ended up being ridiculously silly and overly sentimental for my tastes, but this book is, honestly, peak RTD writing the best version of his style of Doctor Who he could possibly write. I highly recommend anybody who liked his run on the show pick up this book ASAP. And I even recommend it to those, like myself, who weren’t totally in love with his run. I really think this novelization of Rose is worth reading for anybody who likes any era of Doctor Who.

Doctor Who: The Christmas Invasion (by Jenny T. Colgan)
Jenny T. Colgan had the hardest job of any of the four authors who novelized an episode for this first wave of new Target books: she had to take an episode that I really didn’t care for and make it a good novel. I just really didn’t care for the televised version of The Christmas Invasion. The Doctor’s asleep for nearly 3/4 of the story and I never much cared for Rose and Mickey, so it’s near the bottom of my list of favorite Christmas specials. I say this to explain why I didn’t adore this book. All the problems I have with it boil down to the problems I had with the original script and not with the actual writing of this novel. Jenny T. Colgan has a gift for prose and her prose is what makes this novel actually enjoyable. The plot is still extremely weak, but the way Colgan describes everything and the way she’s able to get into the heads of each of her characters, and deepen our understanding of them, their emotions, and their motivations makes this book a worthwhile read.

On the surface, it’s probably the novelization that stays the closest to what we saw on TV. Like Paul Cornell’s Twice Upon a Time, she doesn’t change a whole lot from the televised story to the novelization, but she does add some new stuff. Most of that new stuff comes in the form of superb characterization. There aren’t many new scenes, but the point of view is often different when compared to the TV version. Colgan takes us into the heads of a lot of different characters, and the way she does that really elevates this mediocre story into an enjoyable one. She spends a lot of time with the UNIT folk and Harriet Jones, and the way she fleshes out all of those characters helps us forget the absence of the Doctor for a little bit. It helps that she’s able to do the thing that Terrance Dicks (legendary Doctor Who writer who wrote like half of the original Target novelizations) did: she can weave a tapestry with just a few words and make it beautiful.

The Christmas Invasion is a weak story. The Doctor’s literally just regenerated and he spends the vast majority of the story completely unconscious. That may have been super interesting and subversive when it aired, but it doesn’t hold up all that well. You spend the whole time wishing it could just get on with it and bring the Doctor into the story. But it doesn’t until the very end, and sure, that climax is really good, but it doesn’t make up for the forty-five minutes that led up to it. Colgan’s novelization suffers from this, too, but it’s saved, primarily, by her excellent characterization and her beautiful prose. She’s able to turn an episode I really dislike into a book I enjoyed well enough. It’s easily my least favorite of the four new Target novelizations, but it’s still very good. It’s a big improvement on the actual episode and an enjoyable read, overall.

Now that I’ve read all four of the newly published Target books, I can say with certainty that this is an extremely enjoyable range. As I said in my last review, I think these four books prove that there’s absolutely still a place for these Target novelizations to exist. Yes, they don’t hold the same importance they used to – now that we have DVDs and all that – but they still can be wonderful. They can be ways for the original writers of the stories to reexamine something they wrote and make tweaks to it and adapt it for a different medium; they can be ways for new writers to take an existing story and put a new and interesting spin on it; they can be ways for the audience to enjoy stories they’re intimately familiar with but in a different, engaging way. These new Target novelizations have all been great. Several of them have improved upon the episodes they were based on (whether it be due to the nature that books don’t require a budget to pull off its special effects or the fact that books offer a lot more room for characterization and slower paced stories). I’ve enjoyed each and every one of the novelizations newly released and I dearly hope that BBC Books intends to make more of these – they’d be crazy not to!

1 thought on ““Rose” and “The Christmas Invasion” Round Out the First Wave of “Doctor Who: The Target Collection” With Enjoyable Stories”