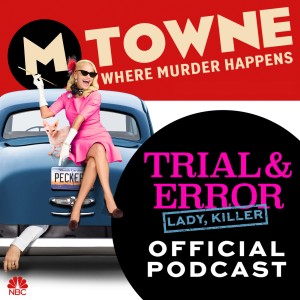 Since there are no new episodes of Trial & Error: Lady, Killer airing this week, I thought I’d dedicate a post to talking about the official companion podcast to the show, MTowne: Where Murder Happens. Hosted by Nina Rudolph (played by Amanda Payton), MTowne is a podcast that’s set within the universe of Trial & Error. It’s frequently mentioned throughout the second season and the host of the podcast, Nina Rudolph, is a main character in the season. In the same way that Trial and Error parodies true-crime TV documentaries, MTowne parodies true-crime podcasts (such as Serial). It’s a whole lot of fun and really offers a lot of new information about this season of Trial & Error.

“M-Towne: Where Murder Happens” is a narrative podcast companion series to the NBC summer comedy “Trial & Error: Lady, Killer.” Hosted by podcast producer character Nina Rudolph, “M-Towne” parallels the on-air season, exploring juicy details in the murder case of Lavinia Peck-Foster, the honorary matriarch of the small Southern town of East Peck. Parodying podcasts like “Serial,” “M-Towne: Where Murder Happens” pokes fun at all the tropes of the true crime podcast genre in this hilarious, yet bonus-content-rich send-up.

Each episode of MTowne features an alternate look at the events of the corresponding episode of Trial & Error. Nina Rudolph recaps various elements of the episode while offering her own opinion and providing various facts that help contextualize things for her listeners. Like Josh was in season 1, Nina is a total outsider to East Peck and, as a result, doesn’t come close to understanding the odd quirks of the town. Things that residents of the town think are normal totally floor her and her reactions to the events of the episodes are a joy to listen to. She’s very much modeled after real-life hosts of these true crime podcasts; she tries to give a balanced, unbiased report of the case, but can’t help slightly judging the residents of the town.

She frequently interviews various other characters from the universe of the show, getting their thoughts and insight into the events of every episode. This is a particular joy for fans of the show as we get to hear from our favorite characters in a different setting than the show gives us. Of particular interest has been the more in-depth backstories we’ve gotten about East Peck itself, and about Lavinia Peck-Foster and Edgar Foster’s history (and how their marriage was somewhat organized by their parents in order to unite the successful Foster’s clock-fixing business with the Peck’s dwindling rum-running business). Kristen Chenoweth delights in her small appearances on the podcast just as much as she delights on the show. While the podcast is mainly from Nina’s point of view, it’s still nice to hear from the rest of the cast.

MTowne does a great job at gently and lovingly satirizing true-crime podcasts, and podcasts in general. True-crime podcasts, like other forms of the true-crime genre, have a lot of tropes that are really easy (and really fun) to poke fun at. Music is used to make things more dramatic, you always have the weird residents of the towns making things weird for the host of the podcast, there’s the idea of “this kind of crime never happens in our town” that’s parodied by the fact that the only reason MTowne even came to East Peck is because two murders happened in the same year or two. Aside from the true-crime specific parodying, MTowne also lovingly makes fun of other podcast tropes: particularly the integration of ads into podcasts. In the first two episodes, especially, Nina will slightly rant about something she finds somewhat inconvenient or just straight up odd about East Peck and will then have to transition into an ad read for a company that provides the service she was just making fun of (for example – East Peck has one airport that’s really lousy and right after Nina complains about it, she goes into an ad read for that exact airport). It’s just a really fun way of acknowledging certain aspects of podcasts and gently making fun of them while still embracing all that makes podcasts fun.

The best thing about MTowne so far is how it’s strengthened the character of Nina Rudolph. Within the first five episodes of the show, Nina hasn’t been given a whole lot to do. She exists as the outsider in the town since Josh has integrated himself more into East Peck this season, but she doesn’t ever have much screen time as she’s not part of the defense team in the way that other characters are. Her other purpose, in the context of the TV series, seems to be as a love interest for Josh. None of this is bad, or anything, but due to her nature as a new character (she’s essentially filling the role that Krysta Rodriguez’s character filled last season) and her limited interaction with the main cast, she hasn’t been able to be developed all that much and so she comes across as the least interesting character on the show. MTowne, however, fixes a lot of that. It’s able to show us all these facets of her that the TV show can only hint at. In MTowne, we can really see her intelligence and research come to light as she presents all this information about East Peck and the case against Lavinia Peck-Foster. We can see her sense of humor as she makes fun of the town and her general bewilderment at all the weird aspects of the town. The podcast just really makes Nina feel like a real person in a way that the TV series hasn’t been able to do.

I’ve complained about the show not doing enough with either Nina or the idea of MTowne, a podcast parodying true-crime podcasts, but that was before I knew they had actually produced MTowne as a podcast that people could actually listen to (and not just a few clips for use inside the TV episodes). The podcast is a wonderful companion for the Trial & Error TV series. It offers a lot of background information on characters, situations, and the town of East Peck itself that the main TV show just can’t offer within the confines of its format and runtime. It does a lot to make the character of Nina Rudolph feel more three-dimensional. It lovingly parodies podcasts (and, more specifically, true-crime podcasts) in a smart, funny way that still shows a lot of respect for the format. And, overall, it’s just a lot of fun. Trial & Error is one of my favorite comedies currently airing on TV, and MTowne just confirms my love for the show and helps expand the world in a really interesting, innovative way.