All good things must come to an end, and it’s a shame that it’s looking like this might be more than a season finale for Trial & Error. If this is the final ending for this great show, at least it’s a stellar one. Trial & Error: Lady, Killer is the second season of Trial & Error, a comedy mockumentary created by Jeff Astrof and Matt Miller, and follows lawyer Josh Segal (Nicholas D’Agosto) and his associates, Dwayne Reed (Steven Boyer) and Anne Flatch (Sherri Shepherd), as they defend someone from murder charges being brought about by Carol-Anne Keane (Jayma Mays). In these episodes, Josh is trying to prove that Jesse-Ray Beaumont (Michael Hitchcock) wasn’t responsible for the murder of Lavinia Peck-Foster’s (Kristen Chenoweth) brother, Chet, and that it was really Lavinia who was his murderer.

“A Big Break”: Josh and his team continue to find themselves at literal dead ends in their casework until they unearth game-changing evidence with the help of Jesse Ray Beaumont. Meanwhile, in court, Carol Anne tries to finish the case before she has the baby. (Written by Jeff Astrof and directed by Jeffrey Blitz)

“Barcelona”: As Jesse Ray Beaumont’s trial begins, the team struggles to keep him under control while they discover more of Lavinia’s secrets. Now that the baby is born and awaiting the DA election results, Carol Anne discovers who is the baby’s father. (Written by Jeff Astrof and directed by Jeffrey Blitz)

This review will contain spoilers for the season finale of Trial & Error. Read at your own risk…  END_OF_DOCUMENT_TOKEN_TO_BE_REPLACED

END_OF_DOCUMENT_TOKEN_TO_BE_REPLACED 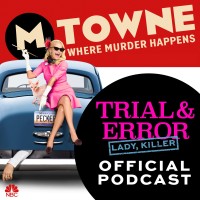 Since there are no new episodes of Trial & Error: Lady, Killer airing this week, I thought I’d dedicate a post to talking about the official companion podcast to the show, MTowne: Where Murder Happens. Hosted by Nina Rudolph (played by Amanda Payton), MTowne is a podcast that’s set within the universe of Trial & Error. It’s frequently mentioned throughout the second season and the host of the podcast, Nina Rudolph, is a main character in the season. In the same way that Trial and Error parodies true-crime TV documentaries, MTowne parodies true-crime podcasts (such as Serial). It’s a whole lot of fun and really offers a lot of new information about this season of Trial & Error.

“M-Towne: Where Murder Happens” is a narrative podcast companion series to the NBC summer comedy “Trial & Error: Lady, Killer.” Hosted by podcast producer character Nina Rudolph, “M-Towne” parallels the on-air season, exploring juicy details in the murder case of Lavinia Peck-Foster, the honorary matriarch of the small Southern town of East Peck. Parodying podcasts like “Serial,” “M-Towne: Where Murder Happens” pokes fun at all the tropes of the true crime podcast genre in this hilarious, yet bonus-content-rich send-up.

END_OF_DOCUMENT_TOKEN_TO_BE_REPLACED

A good ongoing mystery show is only as good as its twists, turns, and red herrings. Trial & Error: Lady, Killer continues to provide us with countless twists and turns and cliffhangers. Created by Jeffrey Blitz and Matt Miller, Trial & Error: Lady, Killer is the second season of NBC’s true-crime satirizing comedy Trial & Error. This season follows the trial of Lavinia Peck-Foster (Kristen Chenoweth) as Josh Segal (Nicholas D’Agosto) and his Associates (Anne (Sherri Shepherd) and Dwayne (Stephen Boyer)) defend her against prosecutor Carol-Anne Keaton (Jayma Mays).

“The Murder Clock”: Josh’s team continues to hunt for the potential murder weapon that would seal their timeline. The case takes a dramatic turn as their search leads them to two new suspects and some shocking news about Lavinia. (Written by Liz Astrof and directed by Jeffrey Blitz)

“A Hole in the Case”: As the trial begins, Josh and his team experience some hiccups in proving Lavinia’s innocence to the judge. As soon as Josh thinks he’s been able to find cause for dismissal of the case, Carol Anne argues to test the timeline herself, leading them to uncover a hidden passageway on Lavinia’s property. (Written by David Booth and directed by Yana Gorskaya)

NOTE: There will be spoilers for episodes 3 and 4 of Trial & Error: Lady, Killer.

END_OF_DOCUMENT_TOKEN_TO_BE_REPLACED 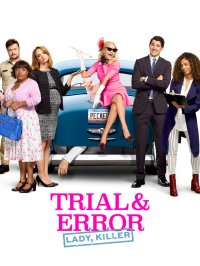 It may be more than a year after the first season of NBC’s Trial & Error finished airing, but the second season makes it feel like no time has passed. Season 2 of Trial & Error is a perfect continuation of the first season in every way and the writers and directors haven’t missed a beat. Trial & Error is a comedic anthology series that follows defense attorney Josh Segal (Nicholas D’Agostoa), and his associates: Dwayne Reed (Steven Boyer) and Anne Flatch (Sherri Shepherd) as they go toe-to-toe against town prosecutor Carol Anne Keane (Jayma Mays) in a new murder trial in the small town of East Peck, South Caroline. This season’s defendant: Lavinia Peck-Foster (Kristen Chenoweth), First Lady of East Peck.

“The Suitcase”: Josh Segal and Associates get their first case, defending Lavinia Peck-Foster, the eccentric First Lady of East Peck who was found with husband Edgar’s corpse in a suitcase in her trunk. Lavinia is surly, entitled, larger than life and, instead of hugs, her currency of connection is a face slap. On the other hand, she is wealthy so she can pay him. Winning this case could be Josh’s ticket for his true goal, to be considered a “Pecker.” Unfortunately, complications and bodies keep piling up and there are more questions than answers. (Written by Jeff Astrof and directed by Jeffrey Blitz)

“The Timeline”: When Judge Kamiltow rules that Lavinia must stand trial for the murder of her husband, Josh and the team try to poke holes in the timeline of the case Carol Anne will present. But when a clock is determined to be the murder weapon, they are forced to seek help from two unlikely sources — the convicted murderer of Lavinia’s brother and the host of a popular murder podcast called “M-Town.” (Written by Craig Gerard & Matthew Zinman and directed by Jeffrey Blitz)