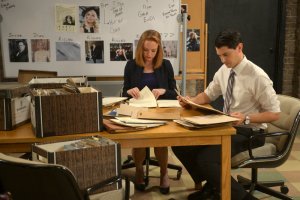 I am not exaggerating when I say that Trial & Error: Lady, Killer just gets better and better with each new episode. This week’s episodes are genuinely the most shocking, hilarious, and jaw-dropping of the season so far. Episode five begins after a rough day in court where Josh is forced to fire his right-hand man Dwayne (Steven Boyer), leading to a series of events that ends with Josh discovering the apparent suicide of Edgar’s former apprentice (whom he had an affair with) and a note where she confesses to murdering Edgar. Shocking, right? From there, the case against Lavinia is dismissed and everyone celebrates at the bar. Lavinia gives Josh a thank you note which causes Josh to discover that the handwriting on the suicide note matches the handwriting on the note Lavinia gave him – meaning that she wrote the suicide note. Lavinia totally killed Edgar and his apprentice. That’s not the kind of reveal you’d expect halfway through a season that’s purported to be the case against Lavinia Peck-Foster. I love that the show is doing things differently this year. I love how it really seems that Lavinia actually killed her husband and I love that by the end of the fifth episode, Josh has successfully gotten a not guilty verdict for her.

Naturally, of course, the story doesn’t end there. Episode six begins with Josh hating himself for getting Lavinia’s charges dismissed now that he actually thinks she did it. Then in walks Nina Rudolph (Amanda Payton) with a recording of her interview with Lavinia from the night before. Towards the end of the interview, Lavinia excuses herself to the bathroom where – in the style of The Jinx – she confesses out loud how she’s gotten away with murder again. Josh believes that the previous time she got away with murder was when she successfully got Jesse Ray Beaumont (Michael Hitchcock) put away for the murder of her brother, Chet. Josh convinces Carol-Anne (Jayma Mays) to reopen Chet’s murder case as Josh sets out to prove that Jesse Ray is innocent and that Lavinia is the real murderer. This is such a brilliant twist on Trial & Error‘s formula. They’re still sticking to the idea of following someone’s court case, and it’s still essentially Lavinia on trial (even if she’s not technically on trial anymore, it’s still a retrial to prove that Jesse Ray didn’t kill anyone and that she did instead). I love the twist and it’s executed in such a way that it really works and really leaves you on the edge of your seat.

The other main benefit of the show employing such a twist halfway through the season (aside from the plot benefits that come from it not just repeating all the things it did in season 1) is how Kristen Chenoweth’s performance changes between episodes 5 and 6. In episode 5, she still seems very innocent and naive but once episode 6 rolls around and Josh starts getting suspicious of her, she starts seeming a lot more sinister. What originally came off as aloof behavior now feels threatening. It really allows Chenoweth to show off her range as a comedic actress. Everything she’s doing is still devilishly funny, but it lands in such a different way than it did before Josh (and, subsequently, the audience) believed Lavinia was guilty. Kristen Chenoweth is really the star of these two episodes, even though the rest of the cast remains as wonderful as ever. She just shines so brightly and the sudden shift in her character’s motivation plays out in such an engaging way that it’s hard to take your eyes off of her. 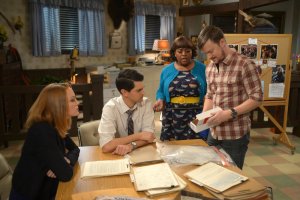 Tonight’s episodes show off Trial & Error at its best. They’re tightly paced, gut-wrenchingly hilarious, and full of twists and turns that will keep any and everyone on the edge of their seats. The show remains wonderfully directed, written, and performed. I appreciate how the writers and directors are still drawing inspiration from different true-crime TV shows (again, such as The Jinx) and I think the satire of the true-crime genre is still really funny. The M-Towne podcast is still the main source of any real characterization for Nina Rudolph, but it was nice to see her actually factor into the main plot more in these episodes and I do enjoy the dynamic between her, Josh, and Carol Anne. There’s a really exciting guest star in episode six that I can’t believe the show managed to get (and keep secret!) and I really hope he makes a return in later episodes because he’s so good here. All in all, these were just really great episodes. They’ve left me craving answers to the mystery even more than the previous four have.