Honestly, this episode should have been broadcast closer to Halloween because it would have been so perfect as a Halloween episode. Doctor Who has had an interesting relationship with witches and magic over the years. It tends to take the stance of magic being misunderstood science and any “witches” either being persecuted women or an actual alien threat. The Witchfinders, written by new-to-Who writer Joy Wilkinson, is no exception to this rule. Much of the episode is spent with King James I (Alan Cumming) and landowner Becka Savage (Siobhan Finneran) going around the village of Bilehurst Cragg accusing various people of being witches only for the episode to eventually reveal that an alien intelligence is responsible for things all along. That being said, the episode is still a whole lot of fun.

Episode 1108: The Witchfinders (written by Joy Wilkinson, directed by Sallie Aprahamian)
The Doctor, Ryan, Graham and Yaz arrive in 17th century Lancashire and become embroiled in a witch trial, run by the local landowner. As fear stalks the land, the arrival of King James I only serves to intensify the witch hunt. But is there something even more dangerous at work? Can the Doctor and friends keep the people of Bilehurst Cragg safe from all the forces that are massing in the land?

This episode has a pretty simple plot: the Doctor (Jodie Whittaker), Yaz (Mandip Gill), Ryan (Tosin Cole), and Graham (Bradley Walsh) arrive in the village of Bilehurst Cragg just as landlady Becka Savage is putting another alleged witch on trial. Naturally, the Doctor gets involved and presents herself as a Witchfinder General. Soon, King James arrives and everything falls apart as some weird muddy corpses begin to rise from the ground and the Doctor finds herself accused of being a witch. Eventually, the Doctor discovers that Becka chopped down a tree that was actually doubling as a prison holding imprisoning an alien race, known as the Morax, that has been exiled to Earth for war crimes. It quickly becomes a race against time as the Doctor and her friends find a way to re-imprison the Morax and save King James I from their clutches. 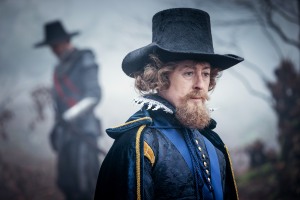 The biggest draw to this episode – and the best part of it – is Alan Cumming as King James I. He just seems to be having the time of his life playing King James. I don’t really know exactly how accurate his portrayal of King James is, though I expect it’s not particularly accurate, but it sure is a lot of fun. Cumming chews pretty much every piece of scenery he can and it’s so much fun to watch. He hams it up in the best possible way and you don’t even really mind just how over-the-top his performance is because it’s so much fun to watch. He plays King James as more of a foppish dandy than the truly terrifying figure he was, but he does touch into that layer of darkness beneath King James’ exterior and it’s nice to see. The Witchfinders, for all intents and purposes, is a celebrity historical episode of Doctor Who. Much like Victory of the Daleks was a celebrity historical about Churchhill or The Unquiet Dead was a celebrity historical about Charles Dickens, The Witchfinders is far more interested in having fun with King James I as a character in the world of Doctor Who than it is in depicting history accurately. That’s not necessarily a bad thing though.

As for the rest of the episode, it’s suitably creepy and paced fairly well, but it’s never as much fun as the scenes with King James I are. The episode’s biggest weakness, as has been the case with much of this season, is its villains. The Morax aren’t properly introduced until the last 10 minutes of the episode and then they’re pretty quickly gotten rid of before they can be much of a threat. Sure, we see the mud corpses that they’re using as avatars for much of the episode, but we’re led to believe that some kind of witch is causing that – the chief suspect being Becka Savage herself – and so the ultimate reveal of it being an alien presence is both unsurprising in the wider context of Doctor Who stories and also a bit boring in the context of the story. It would have been a lot more interesting if Becka Savage had been a witch, or had been some kind of alien herself, rather than just being infected by the Morax. It would have given the story an extra bit of dramatic irony as Savage’s fanatical hatred of witches would have been because she, herself, was actually one, not just that she was sick. The episode spends most of its time building up Becka Savage to be the villain only for her to be another pawn in the Morax’s game and the Morax just aren’t developed enough to be a particularly interesting or threatening villain. They’ve got a kind of cool design as they’re just twisted versions of whatever host body they’re using, but they’re just in too little of the episode to really warrant any kind of reaction to them.

All in all, The Witchfinders is an enjoyable episode purely due to a magnificently over-the-top performance from Alan Cumming, who is clearly having far too much fun playing King James I. The plot of the episode itself is a bit forgetful, though it’s still well-paced and well-directed and features a pretty stunning score from Segun Akinola. Jodie Whittaker is given some interesting material to play with as this is the first time her Doctor has really had to face any real discrimination for being a woman and it’s nice seeing how she grapples with that. I also appreciate how Yaz plays a key role in connecting with Willa Twiston (Tilly Steele), the daughter (or granddaughter, I’m not really sure) of the woman killed in the witch trial at the beginning of the episode. I enjoy seeing Yaz getting to do things. Ryan has a lot of fun scenes with King James as King James seems to take a shining to him. Those are lots of fun, too, and both Alan Cumming and Tosin Cole play them brilliantly. Even though the alien threat was woefully underdeveloped, I still enjoyed the episode a whole lot. All the acting was great and the directing was great and it’s just a fun episode. Not as good as last week’s, mainly due to the lack of development for the villains instead of just having Becka be the villain, but it’s still up there with the more enjoyable ones of the season.