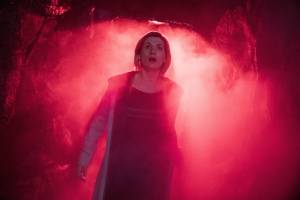 Well, this episode is probably my favorite of the entire season so far. Penultimate episodes of seasons have a lot to try and set up: they’ve gotta lay the groundwork for the finale while also still providing the audience with an interesting and captivating story. This is exactly what It Takes You Away does; it pays off some of the character arcs that have been developed over the season while still giving us a really cracking story. It’s a perfect blend of creepy, weird, and genuinely emotional and I just adored every second of it. (Spoilers ahead!)

Episode 1109: It Takes You Away (written by Ed Hime and directed by Jamie Childs)
On the edge of a Norwegian fjord in the present day, the Doctor, Ryan, Graham and Yaz discover a boarded-up cottage and a girl named Hanne in need of their help. What has happened here? What monster lurks in the woods around the cottage – and beyond? 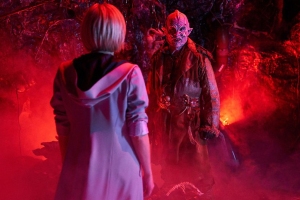 There are so many things that I love about this episode of Doctor Who. The first being how it starts off as one episode and ends as another. By that, I mean that it starts off like it’s gonna be a twist on a base-under-siege episode with the Doctor and her friends arriving at a boarded-up cottage in Norway and finding a scared little girl named Hanne (Eleanor Wallwork) hiding away from a monster she believes has taken her father, Erik (Christian Rubeck). The episode appears to be one in which the Doctor and her friends investigate the house and try to find the father before the monster can arrive again. Fairly quickly, Ryan and Graham discover a mirror in Erik’s bedroom that isn’t acting like a real mirror should. The gang split up, leaving Ryan with Hanne while the Doctor, Graham, and Yaz investigate the mirror and find it’s a portal that takes them to an antizone that’s separating two universes from one another. In the antizone, they discover a goblin-like creature named Ribbons (Kevin Eldon) who tries to swindle the Doctor’s sonic from her in exchange for information about Erik. but he’s quickly killed off by some flesh-eating moths while the Doctor, Ryan, and Yaz escape through another portal that takes them to a mirror universe. 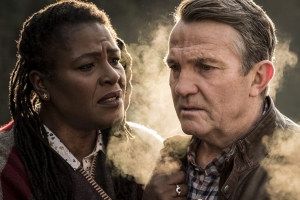 It’s here where the meat of the episode is introduced: Erik has escaped to a mirror universe where his wife and Hanne’s mother, Trine (Lisa Stokke), is still alive. Erik has been lying to Hanne about there being a monster outside of their house, using that as a way to get her to stay inside the house while he stays in this mirror universe with his wife who he’s afraid he’ll lose if he leaves the universe. Also in this universe is Grace (Sharon D. Clarke), Graham’s deceased wife and Ryan’s grandmother who interacts with Graham, giving him a similar journey to go on. This twist changes the episode from a really interesting base-under-siege episode into a more interesting episode that focuses on overcoming grief and I absolutely love it. Doctor Who excels at telling personal stories about either the Doctor or one of her friends, and that’s what this episode ends up doing by introducing this whole mirror universe thing. Of course, all is not as it seems. Neither Trine nor Grace are actually alive; they’re constructs of a sentient universe that’s looking to trap a human there that it can connect with and love. It’s with this reveal that a lot of the interesting exploration of grief happens as both Erik and Graham have to wrestle with whether or not these constructs of their dead wives are enough to keep them in this mirror universe. 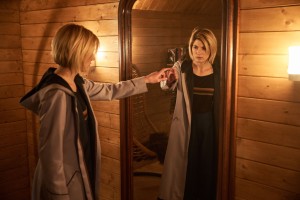 It’s never that easy, though. The longer that the Doctor, Graham, Yaz, and Erik stay in the mirror universe, the more unstable it becomes. Unbeknownst to them, Hanne and Ryan have ended up exploring the mirror and Hanne makes her way to the mirror universe, inadvertently trapping Ryan in the antizone. With the arrival of Hanne, the mirror universe becomes so unstable that it starts collapsing on itself and the Doctor realizes that she has to get everyone out of there before both the mirror universe and the prime universe are destroyed. Here, Graham is given a choice between staying in this mirror universe with Grace or returning to his universe and saving Ryan from the danger in the antizone. It’s heartbreaking watching him struggle between staying with Grace and saving Ryan, but the thing that gets him to make up his mind is “Grace” telling him that Ryan will be okay without their help; his Grace would never tell him to not help Ryan, and he reluctantly leaves her behind. It’s a lot of fun getting to see Sharon D. Clarke back as Grace and the whole remainder of the episode ends up being a really nice way to tie up Graham and Grace’s storyline in such a way that feels both emotionally satisfying and dramatically earned.

It’s here when the episode gets really weird. The Doctor convinces the sentient universe to let everyone else escape and keep her there with it as its friend. The sentient universe soon transforms itself into a talking frog (with the voice of Grace; because Grace loved frogs or something) and the Doctor and the sentient-universe-frog have a conversation about her universe, life, love, and loss and as it’s become clear that the Doctor still being in this mirror universe isn’t stopping it from dying, she convinces the sentient universe to let her go, too, promising it they’ll always be friends. It’s a really weird ending, even for Doctor Who, but I honestly love it. It’s the perfect amount of weirdness for an episode that’s included mirror universes that are also sentient creatures. And it gives Jodie Whittaker a chance to really deliver some good dialogue and deepen her character some and so I just loved it. Plus, I just really love strange things. The episode ends with everyone back in the real universe, Erik and Hanne deciding to move back to the city while the Doctor and her friends take off in the TARDIS for new adventures. Before leaving, though, Ryan talks to Graham about Grace and how he misses her too. And at the end of their conversation, Ryan finally calls Graham “granddad”, bringing that particular storyline to a beautiful ending.

All in all, It Takes You Away is a beautiful episode of Doctor Who. It starts out seeming like any other monster-of-the-week story before morphing into an episode that focuses on Graham’s continuing grief over the loss of Grace. The weird, trippy elements of the episode allow the show to explore this grief in a way that really lets Graham confront it as he has to choose the real Ryan instead of a construct of Grace. Everything about the episode worked for me from Ed Hime’s script, to Jamie Child’s directing, to all the acting from the guest cast (particularly Eleanor Wallwork as Hanne and Sharon D. Clarke as Grace), to Segun Akinola’s score which perfectly compliments the episode as it shifts from one thing to another, to an excellent performance from Bradley Walsh as Graham. It’s an episode that absolutely feels like it’s the penultimate one of the series: it starts to tie up some of the plot threads that have been planted over the series as Graham starts to move on from his grief and he and Ryan finally start to connect as step-grandfather and step-grandson. It’s an episode with high ambitions that end up being executed perfectly. I just adored every bit of this episode and it was a real highlight for me. Plus the next time trailer for the series finale really has me excited as I think I heard T’zim Sha’s voice in it! So bring on the finale!