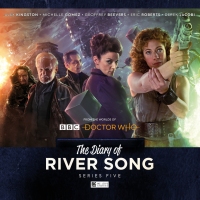 Over the years, River Song (Alex Kingston) has had adventures with every (living) Doctor from the classic run of Doctor Who and those adventures have been a whole lot of fun. With that in mind, it was only a matter of time until she started meeting some of the Doctor’s biggest enemies. And now, she meets, perhaps, the Doctor’s greatest enemy. And several incarnations of them, to boot. Namely, Missy (Michelle Gomez), the Burnt Master (Geoffrey Beevers), the War Master (Derek Jacobi), and the Master from the TV movie (Eric Roberts). With this lineup of actors and characters, you’d expect quite the exciting set of adventures and I’m happy to report that this box set is every bit as good as you’d hope it would be.

The Doctor isn’t the only Time Lord River runs into on her travels up and down the timeline. The Master, in all of his – or her – guises, also has a chequered history with Professor Song. And whenever they meet, it’s a close call as to who comes out on top… It’s something River must get used to: there are three people in her marriage – at the very least!

The Bekdel Test (by Jonathan Morris)
River Song meets Missy and it’s a match made in heaven as the two try to escape an inescapable prison. They find themselves surrounded by other criminals and seemingly indestructible guards and wardens, but is there more than meets the eye to this prison? What happens when River Song meets Missy? A whole lot of ridiculous fun. From Big Finish Productions: Back at the start of her imprisonment, Doctor Song becomes a guinea pig for an innovative new security system. But it’s her fellow prisoners she needs to be most wary of. Because it’s early days for Missy, too. The Doctor is dead, and she is outraged that somebody else killed him first…

This story is a pretty classic escape-from-prison story with River Song and Missy trying to escape from a purportedly unescapable prison. The catch is that it’s all a trap in order to catch the Doctor. And, naturally, neither of them are particularly fond of the idea as they’d rather not have the Doctor locked away inside a prison like this, being tested on by who knows what; there are many secrets held by the Doctor, after all. It’s a clever idea making this inescapable prison actually a trap to catch the Doctor instead of truly being a prison meant to hold dangerous criminals. And the way River and Missy ultimately break out of the prison is delightfully interesting and engaging. Overall, it’s a very strong opening to this box set, featuring a whole lot of great banter between Missy and River. It’s just a lot of fun. (4.5 out of 5 wands)

Animal Instinct (by Roy Gill)
In this story, River Song meets the Burnt Master inside of an ancient tomb. At first, he believes her to be the Doctor, but, of course, she’s actually the woman who killed (and married) the Doctor. Soon, this Master takes River and her assistant, Luke (Timothy Blore), on an adventure to another planet where they must survive an encounter with the indigenous species. It’s quite a bit of fun. From Big Finish Productions: On a world where vicious beasts stalk ancient ruins, Professor Song teaches a student the finer points of archaeology. But then she meets an incarnation of the Master who is desperate to survive. And if they are going to escape this place alive, they all must work together.

This incarnation of the Master feels a lot more blatantly evil than Missy does as he disguises his evil tendencies a whole lot less than Missy. The most interesting thing about this story is the comparison between the Master’s harsh means of survival and River Song’s similarly harsh methods. Both of them seem to have a general disregard for the lives of those around them, though River cares a bit more than he does. The story itself isn’t quite as strong as the previous one; it turns out the Master ruled this planet as a god generations ago and now the indigenous population wants their deity dead for what they believe he did to them. So, it soon devolves from an archaeological romp into a race against death. It’s still quite enjoyable, though. (4 out of 5 wands)

The Lifeboat and the Deathboat (by Eddie Robson)
This story might just be the one fans are most interested in as it features Eric Roberts’ return to the role of the Master – a role he last played in 1996 in the TV Movie. If his performance here is anything to go by, he’d have made a deliciously evil Master and it remains a shame that we never got to see more of him in the show. At least we have this story, now. From Big Finish Productions: Stranded in the Vortex, a father and daughter do their best to survive, living on salvage in a ramshackle vessel. Elsewhere, an obsessive ship’s captain hunts down a vengeful monster, whatever the cost. And River is caught between them, uncovering an old enemy in the most unexpected new guise.

This is the first story in this box set to feature the Master in any kind of disguise, and it’s a definite joy to see that it’s the Eric Roberts Master underneath this disguise. Of course, it’s also painfully obvious that it’s him as Eric Roberts has a distinct voice, but that just makes the listener crave for the moment that River finally realizes who she’s dealing with. This episode also answers the oft-asked question of how the Master escaped from the Eye of Harmony after the 8th Doctor trapped him in it in the TV film. I’m happy to say that the answer is a very satisfying one, and also pretty vital to the events of this story. As for the story itself, it’s a lot of fun. River and the Master are trying to survive attacks from multiple fronts, including a psychic psychopath and a mysterious beast that lurks within the Time Vortex and devours ships. It’s a cracking good adventure that’s well-paced, well-executed, and features a great ending. And, as I said earlier, Eric Roberts is fantastic and it is a joy to hear him as the Master again. (5 out of 5 wands)

Concealed Weapon (by Scott Handcock)
I was very unsatisfied with the War Doctor’s previous outings from Big Finish, so I had lower hopes for this story than I did for the others in this box set. Perhaps it’s those lower hopes that led to me enjoying this story as much as I did. But, man, it is nice to hear the War Doctor and River Song together. From Big Finish Productions: A deep space exploration mission nears its end – when suddenly, the crew starts to die. River Song must try to protect her colleagues and work out what else is on board their ship. Something is stalking them, and the deadliest Master of all has his own plans for River Song…

The first half of this story is a bit slow as the War Master is operating, unseen, in the shadows while River believes that the mysterious two-hearted intruder on the ship is actually the Doctor. It’s actually slightly frustrating at how long it takes River to figure out that this mysterious man isn’t the Doctor, but is, in fact, the Master. But, I suppose, since she hasn’t actually seen or heard him, it’s understandable she might not jump to that conclusion. But still. Overall, the story is just fine. It’s definitely the weakest of the bunch, primarily because the Master and River are separated for half of its runtime. Derek Jacobi is as good as always here, and his plan is suitably devious. It’s not a bad story at all; in fact, I quite enjoyed it once the Master showed up. It’s just getting to that point that takes a while. (4 out of 5 wands)

All in all, The Diary of River Song: Series 5 is another great installment in The Diary of River Song series. It’s one of the only box sets in the River Song line to feature four completely stand-alone stories; there is no overarching plotline that links these stories together. They really are just four, completely separate adventures featuring River and four different incarnations of the Master. It’s a lot of fun hearing Alex Kingston’s River Song interact with four of the most iconic Masters currently working with Big Finish Productions, and each of those actors perfectly recreates their incarnation of the villain in adventures that are perfectly suited for them. I thoroughly enjoyed this box set and I’m looking forward to the next releases from Missy, River Song, and the War Master.