I love the Guillermo del Toro Hellboy movies. Like, really love them. They’re so damn stylish and well made and well-acted. So, with that in mind, it was always gonna be hard for any Hellboy film not made by del Toro (or starring Ron Perlman as Hellboy) to truly succeed for me. That being said, I really didn’t except this remake of Hellboy to be so unenjoyable. It can’t seem to figure out what it is – it’s not really a new take on the character as it’s basically the same tone and look as the del Toro films but it’s not a continuation of those films, either. It’s not an origin story, but it kind of is one at the same time. It’s just a really big mess of a movie – and it’s a shame because there were some really good moments in the film.

Hellboy is back, and he’s on fire. From the pages of Mike Mignola’s seminal work, this action packed story sees the legendary half-demon superhero (David Harbour, “Stranger Things”) called to the English countryside to battle a trio of rampaging giants. There he discovers The Blood Queen, Nimue (Milla Jovovich, Resident Evil series), a resurrected ancient sorceress thirsting to avenge a past betrayal. Suddenly caught in a clash between the supernatural and the human, Hellboy is now hell-bent on stopping Nimue without triggering the end of the world.
(Written by Christopher Golden, Andrew Cosby, Mike Mignola; directed by Neil Marshall) 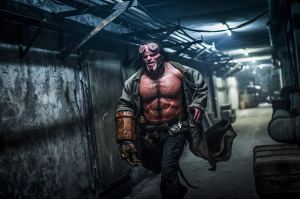 The biggest problem, perhaps, with Hellboy is that it really feels like three episodes of a TV series crammed into a two-hour-long film. Each act of the film feels less like an act of a film and more like a separate episode of a TV series. And each of those individual storylines would have been better served by having a much longer amount of time to properly explore them with. The film opens with Hellboy trying to locate a missing B.P.R.D. agent, only to discover that that agent has turned into a vampire. It’s hard to care about this storyline at all because we’ve never met this agent. Imagine how that plot could have worked if there’d been half an hour leading up to it. From there, Hellboy is tasked by the B.P.R.D. to travel to England and help the Osiris Club (basically a British mixture of the B.P.R.D. and a regular gentlemen’s club) take down a bunch of giants. Predictably, the Osiris Club turns on Hellboy and is actually trying to kill him as they believe he will usher in the apocalypse. Again, a plotline that could work had there been a significant amount of extra time devoted to establishing all of these people.

Mixed in with those plotlines are fairly short scenes that set up the main conflict with Mila Jovovich’s Nimue. To continue the TV show comparison, it felt like when a season of a TV show layers in small hints to the season-long arc in each episode. A small scene here or there to tease the big villain that will be fought and defeated in the season finale. That kind of formula works really well when it can be spread out over 8+ hours of a TV show. It works less well when it’s happening in a 2-hour movie and competing against no less than three other villains. Thankfully, the latter half of the second act and the entirety of the third act is solely devoted to dealing with Nimue, but at that point, you’re suffering from such whiplash at the speed with which the film is going through plotlines that you’re just craving the end of the film. Nimue is given next to no development; she’s just an evil queen who wants revenge and sees Hellboy as the means to get her revenge. And then she’s defeated rather easily at the end of the film. Compare her to Rasputin from the first del Toro Hellboy film and it’s abundantly clear who the more interesting villain is. 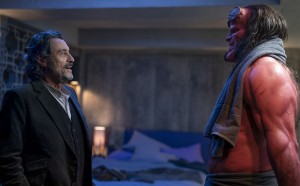 So, with the plot being not that interesting, it falls to the characters, their interactions with each other, and the execution of the action scenes to save the film. Unfortunately, all three of those elements are just as messy as the plot. The only two characters who get any kind of development are Hellboy and Bruttenholm. The relationship between Hellboy and his adopted father makes up the emotional core of the film and both Harbour and McShane act the hell out of it, but it still falls a bit short. And that’s down to the writing. The writing never really explored their relationship in anything more than a surface level kind of way. So, the fact that Bruttenholm (and his death) ends up being central to the climax of the film, much the same as it was in the del Toro’s Hellboy, falls a bit flat. Again, this kind of characterization would have worked way better if it had been spread out over a season’s worth of episodes instead of confined to like five scenes in a two-hour film. Aside from those two, none of the other characters get any kind of real characterization outside of their purpose in the plot. So none of them are remotely memorable. And as for the execution of the action scenes – it’s messy. This film is rated R, and it shows, but not in a good way. It’s so gory that it feels like it’s being gory just for the sake of being gory. It’s so over-the-top that it’s grosser than it is scary, but even then, it’s mostly CGI – and bad CGI at that. Additionally, many of the action scenes are edited fairly strange and Hellboy fights just as many indistinguishable CGI monsters as he does well designed practical ones. It just didn’t click. 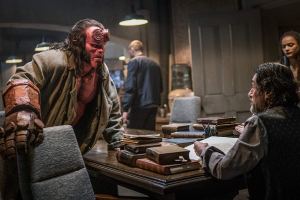 All in all, Hellboy is a mess. I don’t think it’s as bad as most of the reviews suggest. If you read a lot of those reviews, you’d go in expecting the film to be a total trainwreck. It’s not; it’s a mostly competent film that’s just executed in the least interesting way possible. There are good ideas there, but they’re buried underneath mountains of terrible CGI, a lot of half-baked plots and characterizations, and uninspired performances. Nobody in the film is really bad but nobody is really good either. They’re just kind of there. To be fair, it’s hard to deliver a good performance when you’re given such a mediocre script to work with. I feel like this reboot of Hellboy makes a pretty good case for the property to be turned into a TV series. This film felt like multiple episodes of a TV show crammed into a two-hour movie, so I could easily see how this take on the material could work as a Netflix-style TV show. It’s just a shame that won’t happen because of how poorly received this film was. If you’re looking for a Hellboy fix, just read the comics or watch the del Toro films; don’t see this.