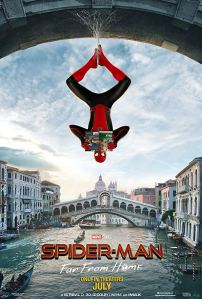 It’s not exactly a secret that I’m not the biggest fan of the MCU. It’s not that I have anything against the series as a whole, and I’ve quite liked a number of the movies, but a much larger number of them tend to be exceedingly mediocre movies. There’s nothing wrong with a movie that’s just “okay” – but when it’s film after film after film that all feel the same and don’t aspire to be much better than simply “fine”, it can get really exhausting very quickly. There’s really only one or two MCU movies that I thought were actually bad (Civil War and Endgame), but both of them were huge team-up movies. I tend to have nicer thoughts for the solo films. As for this iteration of Spider-Man, well… I didn’t love his appearance in Civil War and Homecoming‘s tone felt a bit too ’80s-teen-movie at times for my tastes, but he’s a solid character and Tom Holland is doing a very good job with his portrayal and the character has some of the best villains in the entire Marvel universe (and Homecoming’s usage of The Vulture was very good), so I have more positive thoughts about Spider-Man than I do for some other MCU movies. So, with the upcoming release of the newest Spider-Man movie, Far From Home, it’s time to see what’s next for Spider-Man in the aftermath of Avengers: Endgame. Is this movie better than Endgame was? Answer: Yes, but that’s not exactly a high hurdle to clear – and Far From Home barely clears it. (This review will be as spoiler-free as possible, but if you don’t want to know anything about the movie, this is your warning.)

Spider-Man: Far From Home (written by Chris McKenna and Erik Sommers, directed by Jon Watts)
Peter Parker (Tom Holland) returns in Spider-Man: Far From Home, the next chapter of the Spider-Man: Homecoming series! Our friendly neighborhood Super Hero decides to join his best friends Ned (Jacob Batalon), MJ (Zendaya), and the rest of the gang on a European vacation. However, Peter’s plan to leave super heroics behind for a few weeks are quickly scrapped when he begrudgingly agrees to help Nick Fury (Samuel L. Jackson) uncover the mystery of several elemental creature attacks, creating havoc across the continent!

If you’ve seen the trailers for this movie, you know the basic plotline of the movie. In the wake of Tony Stark’s death and Captain America’s disappearance, the Earth is in need of a new Iron Man-esque hero. Everyone seems to think Spider-Man is a great candidate for this but Peter isn’t particularly interested. He just wants to go on his school trip to Europe and tell MJ (Zendaya) that he likes her (side note – when was it established that Peter had any feelings for MJ? He was all over Liz in Homecoming, yet, here, he starts the movie off with a major crush on MJ. Did I miss something?). Of course, things don’t go according to plan and Peter gets dragged into Nick Fury’s orbit when some strange elemental creatures start attacking various parts of the world, only to be fought off by a mysterious hero, Quentin Beck (Jake Gyllenhaal) – nicknamed Mysterio by people who have seen him in action. Meanwhile, there’s a whole lot of teenage drama happening between various characters – as you’d expect in an MCU Spider-Man movie – and, as one might expect, nothing ends up going according to anyone’s plan.

If you liked Spider-Man: Homecoming, you’ll probably like this movie – though, perhaps, not as much as you liked Homecoming. I wanna be clear – Spider-Man: Far From Home isn’t a bad movie. In fact, it’s fairly enjoyable as you watch it – mainly due to some very well executed jokes. However, the moment you start to think about it in any great detail, it all falls apart. I have two major problems with the plot/writing of the movie. The first problem is the excess amount of teenage drama. Spider-Man: Homecoming was a mixture of John Hughes-esque teen movies from the ’80s and a typical superhero movie and it was a mixture I didn’t really care for as I don’t care much for John Hughes movies. Spider-Man: Far From Home cranks up those elements even more than the previous did. There’s a love triangle between Peter, MJ, and another classmate which – while, I suppose, might actually be realistic, ends up making you roll your eyes a number of times and wish the movie would just get on with it all and get the characters together – since you know which ones are gonna end up together. I’ve never been a fan of these kinds of storylines and I’m definitely not a fan of it here. Yes, Spider-Man is a teenager and it’s nice that he’s acting like one, but there is only so much of that I can take before it becomes really boring. Unfortunately, these interactions don’t really feel natural; some teenagers certainly act like this, but it often comes across as 30+-year-old writers trying to write teenage love – and it’s exhausting. Maybe I’m just a grumpy old man who’s not in the target audience for those kinds of shenanigans, but watching characters be extremely awkward with one another only stays interesting for so long.

The other problem – and, frankly, the much bigger issue – involves the villain and Tony Stark’s influence over the whole film. The villain’s motivation is where the bulk of the plot really starts to fall apart. It’s horribly uninteresting. Their motivation is something we have seen more than once within the MCU – and it’s essentially the exact same motivation as the one the villain in the previous Spider-Man film had, just with a couple of differences. It’s a real big shame because I actually enjoyed the villain for the bulk of the movie until their plan and motivations were revealed – in fact, the moment the twist happened, I turned to the person I saw the film with and said, “this movie has gone off the rails.” I don’t know why the MCU continues to use the same few stock motivations for all of its villains – or why it insists on taking villains who had really interesting motivations in the comics and giving them super generic ones in the films, but that’s what they’re choosing to do and it absolutely doesn’t work at all here. Then there’s the amount of influence that Tony Stark – and his death – leave on the film. I understand – and enjoyed! – Stark and Peter’s relationship from the previous movies, but Stark is dead and it’s not like this movie takes place immediately after Endgame. Some time has passed and the fact that Peter and nearly all of the main adult cast are so obsessed with Tony Stark and his legacy and finding a new Iron Man – to the point that it becomes the focal point of a number of different characters’ motivations – is exhausting. I didn’t hate Tony Stark, but there comes a point where both the MCU and the characters within it need to move on. At first, you think a chunk of the movie might be about Peter mourning Stark and eventually moving on from his death and realizing that he can be his own person and not who Stark wanted – but the film never actually commits to that and so it feels extremely half thought out. The movies already mourned Stark’s death with the final scene of Endgame, we didn’t need so much of this Spider-Man film to continue mourning him. It’s exhausting and makes Spider-Man feel less like his own hero and more of a Tony Stark Jr., which isn’t fair to Spider-Man as a character – nor is it good for the longevity of the MCU.

It’s not all bad news, though. There’s a decent amount here that’s very good. All of the actors deliver very solid performances – the standout is probably Jake Gyllenhaal as Mysterio. He’s a whole lot of fun to watch throughout the film (even if I didn’t like all of his character’s development). He had a nice relationship with Peter and Gyllenhaal and Holland played very well off of one another. All of the younger actors did good jobs; Holland and Zendaya have nice chemistry – even when it’s being tested by how awkward their characters act around each other (though, it’s an utter shame that Zendaya isn’t given more to do in this movie because she’s excellent); similarly, Angourie Rice and Jacob Batalon had good chemistry and provided a number of laughs together (and Batalon and Holland continue to play well off of each other); Jon Favreau and Marisa Tomei are wonderful, even in their fairly short appearances; and it’s just an utter delight to see Samuel L. Jackson and Cobie Smulders playing Nick Fury and Maria Hill together again for longer than a one-minute end-credits scene. I actually think this might be Maria Hill’s most screentime in any Marvel movie and it’s so nice seeing the both of them in scenes again. Additionally, the visuals in this movie are superb. All of the European locales look gorgeous in this movie and all of the fight scenes are an utter delight to watch as they’re very well-executed. Much of the villain’s powers revolve around illusions which, naturally, necessitates a whole lot of CGI. All of that CGI is genuinely stellar.  A lot of CGI is used in the battle between the villain and Spider-Man and it all looks so good; the movie leans into the villain’s abilities and uses the CGI to create some fairly nightmarish landscapes that are fantastic to behold. Honestly, the CGI is as good here as it was in Doctor Strange. It’s embarrassing how bad Hulk looked in Endgame compared to how good some of the CGI looks here. 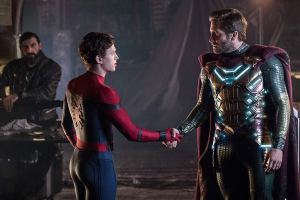 All in all, Spider-Man: Far From Home is a very uneven film. I didn’t hate it, even if it sounds like I might have. There’s a lot of fun to be had – especially between the interactions between Peter, Nick Fury, and Mysterio. The special effects are utterly remarkable – putting to shame the CGI in Endgame. And a lot of the humor does land. Unfortunately, the movie has some pretty major writing issues – to the point where I literally felt the movie falling apart as I watched it. The plot is messy, the characterization is uneven, the motivation of the villain feels extremely repetitive, and there’s an overabundance of uninteresting John Hughes-style teenage drama (and I really don’t care for John Hughes movies). Not only that, but there are some pretty bad pacing issues, especially in the second half; it takes a while for things to get going, and even when they do, it still seems to happen at a snail’s pace and there were several moments where I thought the movie was gonna start wrapping up when it actually wasn’t. It’s not a particularly long movie – only a few minutes over two hours – but it does feel longer than that, and that’s a problem with the script and with the directing. The mid-credits scene, however, does tease a very interesting development in the story (featuring a very surprising character) that sets up a premise for a third Spider-Man movie that is infinitely more interesting than anything that happened in this film. So, at least it ends on a very high note. At the end of the day, if you enjoyed Spider-Man: Homecoming, you’ll probably enjoy Far From Home. While it’s not as good as Homecoming, it’s not a bad film either. It’s just another MCU film that is merely okay.