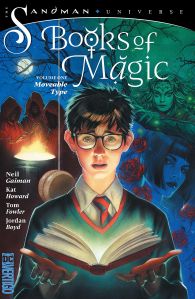 I never read Neil Gaiman’s original 4-issue run of Books of Magic, nor did I read any of the subsequent runs, so, naturally, of the four titles initially announced for the first wave of Sandman Universe series, this one was the one I was least interested in. It’s not that I wasn’t interested in the premise – I love a good story about people learning how to do magic – but it was more the idea that, due to my lack of knowledge of any of the previous stories, I’d be totally lost going into this comic and find myself unable to enjoy it for what it is. Thankfully, that’s not what happened. Unfortunately, it is still my least favorite ‘volume 1’ of the three in the Sandman Universe that I’ve read so far. (Mild spoilers follow!)

Books of Magic, Volume 1: Moveable Type (written by Kat Howard, illustrated by Tom Fowley, colors by Jordan Boyd)
While Tim’s trying to study and attract the cutest girl in his class, there are cultists who want to kill him, believing his magical powers will eventually corrupt him, turning him into a merciless mage that will bring upon the end of magic forever! But when a mysterious new substitute teacher for his school called Dr. Rose wants to mentor and educate him in the magical arts so that he can discover the secrets behind the Books of Magic, Tim believes he has the tools to find his missing mother. Is this sudden guidance too good to be true, and what connection–if any–does Rose have to the disappearance of Tim’s teacher Mr. Brisby?