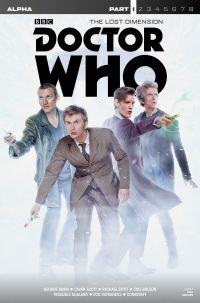 What to say about The Lost Dimension: Alpha? I definitely wish the issue was longer. That sounds like a complaint, but really, it’s more of a compliment because it really is just that good of an issue. In Titan Comics’ latest Doctor Who crossover, The Lost Dimension, multiple incarnations of the Doctor come together in order to save the universe from a mysterious entity known only as The Void. The Void has always existed: “No place. The silent realm. The Lost Dimension.” But the void is no longer empty. The void is hungry. It’s devouring our universe – through time and space! Now, every Doctor must play his part to save… EVERYTHING! Written by George Mann and Cavan Scott and illustrated by Rachel Stott, Cris Bolson, Pasquale Qualano, Elton Thomasi, Klebs Jr., and JB Bastos, The Lost Dimension: Alpha is the first of eight issues in The Lost Dimension crossover event. (As always, spoilers follow)  END_OF_DOCUMENT_TOKEN_TO_BE_REPLACED