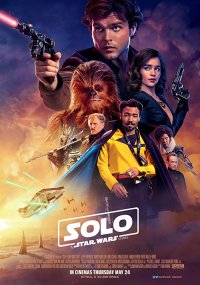 Solo: A Star Wars Story is not a particularly good movie. On the bright side, however, it’s not a total trainwreck either. It’s just…fine. It would be a much better movie if it didn’t have to focus on Han Solo at all. Directed by Ron Howard and written by Lawrence and Jonathan Kasdan, Solo: A Star Wars Story is the latest stand-alone anthology film in the Star Wars franchise. Starring Alden Ehrenreich as Han Solo, Solo is a prequel to the original Star Wars trilogy that reveals the backstory of Han Solo.

Board the Millennium Falcon and journey to a galaxy far, far away in ‘Solo: A Star Wars Story,’ an adventure with the most beloved scoundrel in the galaxy. Through a series of daring escapades deep within a dark and dangerous criminal underworld, Han Solo meets his mighty future copilot Chewbacca and encounters the notorious gambler Lando Calrissian, in a journey that will set the course of one of the Star Wars saga’s most unlikely heroes.

Disney and Lucasfilm have released the first trailer for Solo: A Star Wars Story and it doesn’t look all that good. It’s kind of a mess, to be honest. Alden Ehrenreich doesn’t feel remotely like Han Solo in this trailer and it’s easily apparent why Disney reportedly had to hire an acting coach for him for this film. The visuals are nice, and Donald Glover as Lando looks like a lot of fun, but otherwise, it just looks kinda meh. Star Wars has gotten great at producing great trailers and mediocre movies and nothing in this trailer gives me the impression that Solo: A Star Wars Story is about to change that. I’m not sure if the film is setting out to be a comedy or an action movie (or both), but if it’s a comedy, it seems even stranger that Lucasfilm fired the original directors of the movie, Phil Lord and Christopher Miller, given their comedic background. I dunno really what to make of this trailer or the movie. The movie utterly failed at piquing my interest or making me excited for the movie. Unless the quality of future trailers increases dramatically, I won’t be seeing this film in theaters.

A more in-depth review of the trailer can be found on my YouTube channel or in the video below: