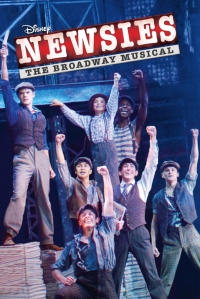 Disney’s Newsies: The Broadway Musical is a recording of the hit Broadway musical Newsies filmed live at the Pantages Theatre in Hollywood, CA during the last leg of the musical’s national tour. This filmed version features the return of many of the original Broadway cast – including Jeremy Jordan, Kara Lindsay, Ben Fankhauser, Andrew Keenan-Bolger, Kevin Carolan, Mark Aldrich, Tommy Bracco, and John E. Brady – as well as the final national tour cast – including Steve Blanchard, Aisha de Haas, Ethan Steiner, Iain Young, Michael Gorman, Michael Rios, Devin Lewis, and Anthony Norman, among others – combined into one large cast to permanently capture this award-winning musical. As per Fathom Events: Newsies Jack Kelly, a charismatic newsboy, and leader of a ragged band of teenaged ‘newsies,’ who dreams only of a better life far from the hardship of the streets. But when publishing titans Joseph Pulitzer and William Randolph Hearst raise distribution prices at the newsboys’ expense, Jack finds a cause to fight for and rallies newsies from across the city to strike and take a stand for what’s right.  END_OF_DOCUMENT_TOKEN_TO_BE_REPLACED